You may as well get used to the above image. You’ll be seeing it hundreds of thousands of times between now and November in countless Republican ads, both in Iowa and around the country.

The disappearance of Mollie Tibbetts in Brooklyn, Iowa came to a sad and tragic end today when it was announced that investigators found a body they believed to be the young college student in a Poweshiek County corn field. This afternoon, the Iowa Department of Criminal Investigation released the name of the person they had taken into custody: Cristhian Bahena Rivera, originally of Mexico. The man apparently admitted to the crime and led police to her body.

“We have confirmed with Homeland Security investigations that he is an illegal alien, and we believe he has been in this area now for four to seven years,” the DCI spokesman said at press conference.

You know where this is heading.

While the criminal proceeding to hold Rivera accountable for this horrendous crime will certainly be conducted professionally, the same will likely not be said for how Iowa’s politicians react to it.

“We are angry that a broken immigration system allowed a predator like this to live in our community, and we will do all we can to bring justice to Mollie’s killer,” Governor Kim Reynolds said in a statement.

Now, should a tragedy such as this lead to at least some discussion of whether Rivera, who it’s unclear at the moment if he a past criminal history, should have been in the country in the first place? Absolutely. But will the resulting political conversation be rational or productive? You know it won’t.

An outpouring of support and grief over the Tibbetts case had already expanded far beyond Iowa. Every small twist and turn in the investigation drew considerable headlines, leading some news outlets to reflect on how sensationalized these crimes can get. Close to 50 reporters were on hand in Montezuma, Iowa for the press conference today. 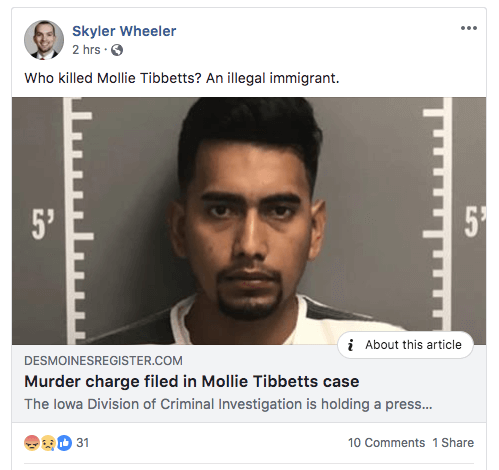 The political reaction will likely not stay on a state level for long either. Donald Trump gladly waded into the controversy over Sarah Root, a young woman from Council Bluffs who died at the hands of a drunk driver who was an undocumented immigrant.

Trump blasted Barack Obama and Democrats, saying that to them Root was “just one more American life that wasn’t worth protecting. One more child to sacrifice on the altar of open borders.” He even invited the family of Root onstage at Joni Ernst’s Roast And Ride fundraiser in 2016.

It is likely only a matter of time before Trump himself weighs in on the Tibbetts situation. Don’t be surprised if comes to Iowa specifically to do a campaign rally on it.

How might Iowa Republican campaigns respond? You only need to look back to the Root case to know. Congressman David Young, the one Republican here who typically shies away from the more racially-sensitive topics that Steve King ignites, went all in on the issue in his last reelection race. Young pounded his Democratic opponent Jim Mowrer repeatedly on the campaign trail and in ads over his proposed “Sarah’s Law.”

The issue also played a big part in defeating then-Senate Majority Leader Mike Gronstal, a man few Iowa political observers thought could ever be beat. His Republican opponent Dan Dawson used the concern over Root’s death to oust Gronstal from the Council Bluffs district he had represented for over three decades.

At no point were Iowa Republicans hesitant in the slightest about the clear, racially inflammatory underpinnings of their strategy. They knew that flashing the photos of a brown man accused of killing a young, white woman would whip up irrational fears about immigrants, and that people would associate Republicans with being “strong” on immigration. Their intent was not to actually fix the immigration system (nor to address any other numbers of senseless deaths in Iowa). And even if a few of them did, the intensity and extent on which they aired ads about the Root case made it clear they had other reasons, as well.

This current situation, sadly, fits all too easily into the extremely inaccurate and racist Republican stereotype of the scary immigrant. Investigators said that the man largely kept to himself in the community, that he admitted to stalking Tibbetts in his car as she was on her run, got out and chased her before “blacking out,” which he apparently said happens when he gets angry. On what appears to be the man’s Facebook page, he even posted a photo of machine guns lying on a bed as one of his profile pictures.

And the locals around Brooklyn, Iowa will likely feel resentment after online amateur sleuths pointed their fingers at different local residents that weren’t Rivera as the investigation progressed.

So, get ready. We’re about to endure 70-some days of some of the ugliest, blatantly race-baiting campaign ads you’ve ever seen. The intensity of them will be closely connected to just how desperate Republicans get in their reelection efforts. Just as the Tibbetts news broke this afternoon, Trump’s former lawyer Michael Cohen’s deal with prosecutors revealed some of the absolute worst legal news yet for the president. We’ve seen in the past that when Trump lashes out, his anger is often aimed at inflaming racial tensions.

It would be nice if we could simply take the time to mourn the Tibbetts’ family’s loss, honor her memory and then come up with actual ways to keep a tragedy like this from happening again. But, our political culture these days is total garbage. And total garbage, not respectful reflection or real solutions, is what we’ll see all the way to November 6.

12 Comments on "Get Ready For The Ugliest Iowa Election Ever"