The Republican Party’s efforts to define Fred Hubbell early on have not had much success in the past month and a half. Now even Senator Chuck Grassley is critical of his party’s line of attack.

“I always stick to policy when I’m campaigning, and I would advise other people to stick to policy,” Grassley told reporters yesterday when responding to questions about the “Sir Frederick” nickname that the Republican Party of Iowa has given Hubbell.

It was the largest indication yet that Republicans are growing concerned about their own strategy to frame Hubbell as an out-of-touch rich guy. The goal seems to be to make Hubbell the next Mitt Romney (never mind that Republicans urged voters to back Romney a few years ago – or the wealthy businessman president we have currently), but it hasn’t really seemed to stick.

The Hubbell campaign is up with their own TV ad responding to Kim Reynolds’ first negative ad of the cycle that blames Hubbell for Younkers store closures in rural Iowa.

“Kim Reynolds tells a lot of stories, but that doesn’t make them true,” the narrator begins the ad with.

It goes on to note that Hubbell ran Younkers over 30 years ago (something that may mitigate the impact of Reynolds’ ads – do voters care about store closures from three decades’ past?) and that Hubbell added hundreds of jobs to the company. It went on to contrast Hubbell’s past work of financing mental health facilities and a Planned Parenthood clinic while Reynolds has cut funding for Medicaid and mental healthcare.

The quick reaction time is also one of the benefits that supporters of Hubbell mentioned back in the primary. Being the best-funded Democratic campaign that Iowa has ever seen means that Hubbell has the resources to quickly respond to any Republican attack on the airwaves. The party’s candidates for key offices in the past haven’t had the ability to match every criticism ad for ad, allowing the negative perceptions to slowly take hold.

Reynolds Updates Her Own Ad

Blink and you might miss the change that Kim Reynolds’ campaign made to her negative ad, but it’s an interesting one that gives us a chance to talk about TV ad rules. In the original ads that were shipped to TV stations at the end of last week, there’s the usual “Paid for by” line at the bottom of the screen for the final few seconds: 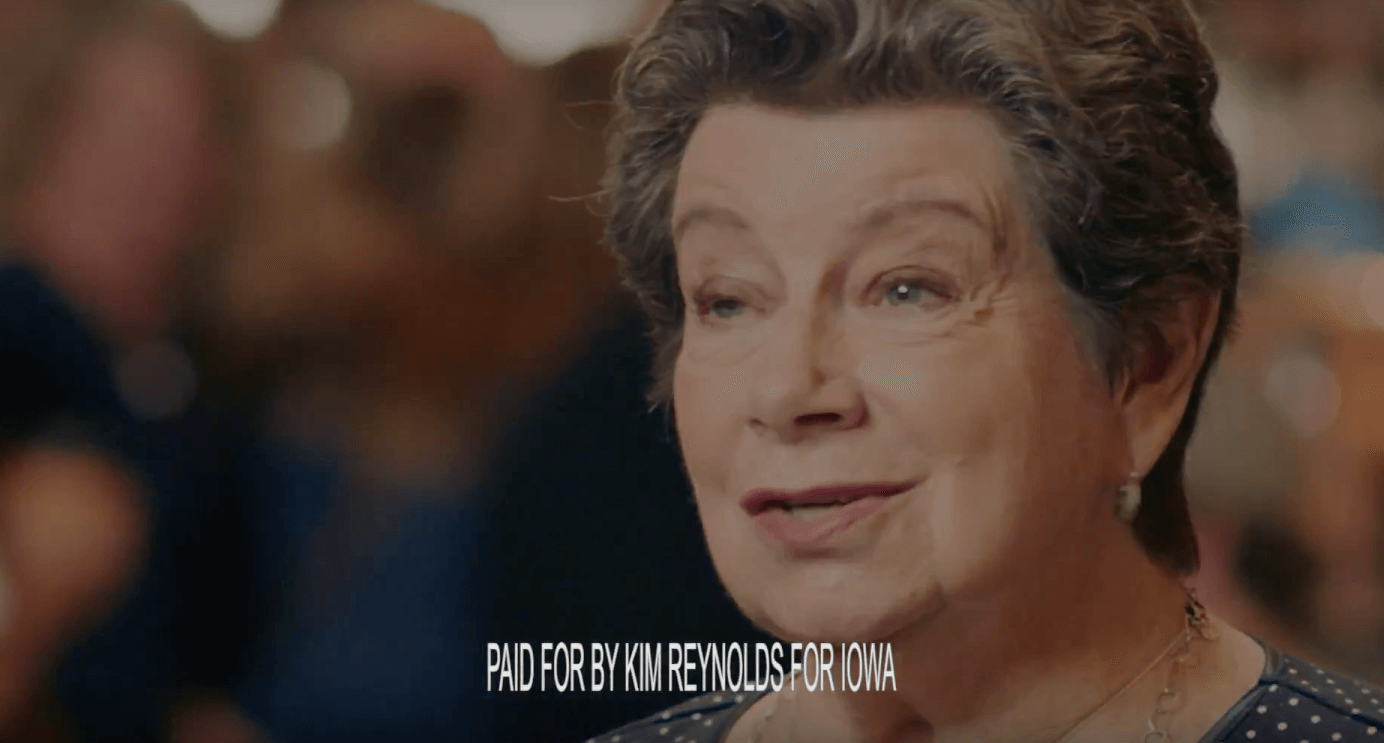 In an updated version to the ad sent to stations early this week, there is now a little photo of Governor Reynolds positioned right next to the disclosure line. These are known as “postage stamp” photos. 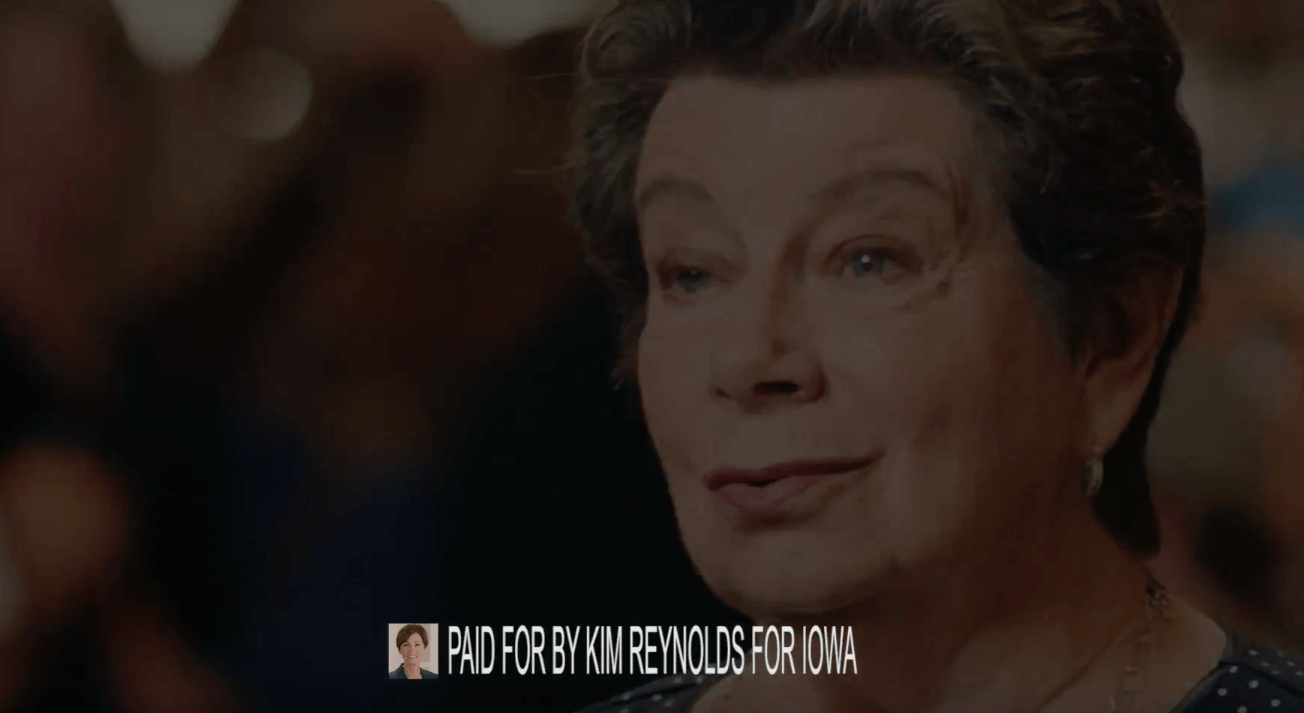 Now, why does that matter? It’s not like many viewers were going to be confused over who this ad was paid for by even if their eyes didn’t notice the text at the bottom of the screen. But the reason it’s noteworthy is because of the non-censorship protection and cheaper rates for candidate ads.

Here’s how it works: U.S. Code Title 47 Chapter 315 governs how TV stations handle candidates’ ads, equal opportunity protections and rules for non-censorship. Under the statue, a “legally qualified candidate for any public office” can air their message and the TV stations have “no power of censorship over the material broadcast.” They also importantly get access to certain pricing rates for candidates that issue group ads may not. But only if the ads do certain things.

Essentially, if you’re just saying positive things about yourself, you’re fine. Talking about your opponent, however, is different.

“Such candidate shall not be entitled to receive the rate under paragraph (1)(A) for the use of any broadcasting station unless the candidate provides written certification to the broadcast station that the candidate (and any authorized committee of the candidate) shall not make any direct reference to another candidate for the same office, in any broadcast using the rights and conditions of access under this chapter, unless such reference meets the requirements of subparagraph (C) or (D),” it states.

So, what are those requirements? It describes them as such:

“(C) Television broadcasts: A candidate meets the requirements of this subparagraph if, in the case of a television broadcast, at the end of such broadcast there appears simultaneously, for a period no less than 4 seconds –

Essentially, candidates’ ads are protected under free speech rules and have broad leeway in what they can say about their opponents so long as they put a photo of themselves in some way in their ad for at least four seconds. That gets them under the non-censorship protection, as well as the special advertising rate.

It’s entirely possible that Reynolds’ campaign simply updated the ad in order for it to fall into compliance for the candidate ad pricing rates. But Hubbell’s campaign has also argued that the allegation about the $90,000 pay raise (implied in the ad that it was done after the store closures) came about from a job promotion Hubbell received before those closures – not some increase he gave himself. And they’ve noted he wasn’t running the day-to-day operations when those specific stores shut down.

So, it’s also possible that the change was to make extra sure it couldn’t get challenged for false or misleading statements. Which would tell you something about the actual merit of Reynolds’ claims.