With Rita Hart joining Fred Hubbell on Democrats’ statewide ticket, Hart’s Senate District 49 now becomes an open seat for the party. And while this used to be a district with a decent Democratic lean thanks to the city of Clinton’s working-class base, Donald Trump carried it 51% to 42% in 2016. Hart was still heavily favored to win thanks to her past success in the rural areas of the district, but her withdrawal could turn this into a toss-up.

Democrats will have to hold a special nominating convention, probably later this month, to put a new candidate on the ballot.

Republicans have a strong candidate in Chris Cournoyer, a small business owner and sheriff reserve deputy from Le Claire. She has some education experience, serving as the president of the Pleasant Valley Community School Board and as part of Governor Reynolds’ STEM advisory council. And Cournoyer has already proven to be one of Republicans’ best fundraising challengers, bringing in over $40,000 for her race so far. 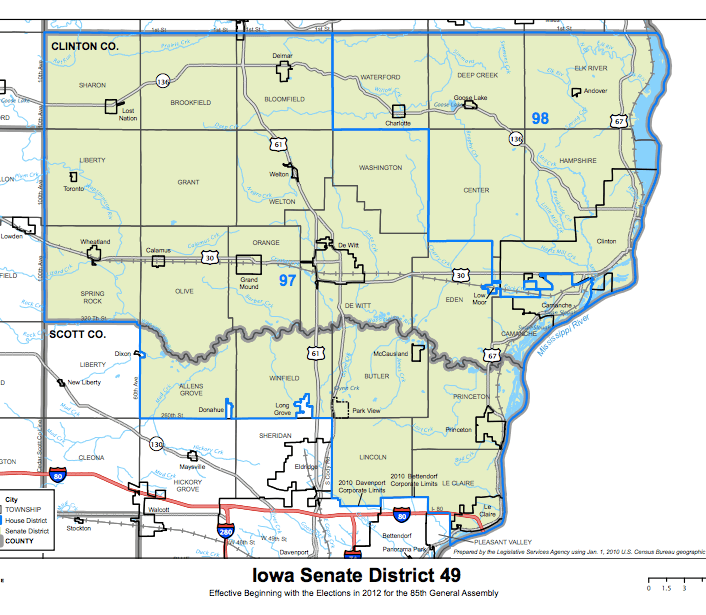 But Hart won this district by nine points in 2012 and four points in 2014. If Democrats can find a good replacement candidate and the overall trends are better for the party in 2018 than in recent years, Democrats still have a good shot of holding onto it. And Hart’s role on the statewide ticket should excite local volunteers, boost turnout and probably win over some swing voters who see that the Democratic Party cares about their corner of the state.

Still, no matter who Democrats find to run, Cournoyer will now have many months of a head start on organizing, knocking on doors and raising money. It’ll certainly cost Democrats more money to hold now. Republicans will likely see this as one of their top pick-up opportunities. They already have decent chances against Senators Amanda Ragan and Tod Bowman. Their success in Bowman and Hart’s districts may simply hinge on whether the Mississippi River counties move back to their blue leanings after having swung drastically for Trump.

Depending on how good the year is for Democrats, other districts like Jack Whitver’s SD 19 and Julian Garrett’s SD 13 could come on the map, but it would have to be a rather good year for that.

Democrats need to win back six seats to take control of the Iowa Senate. That would be extremely difficult to pull off this year, but picking up a net gain of two to three seats is crucial to having a chance in 2020 to win a majority. If they come out of 2018 in the same place they started, Democrats will likely have to wait until redistricting in 2022 to have a real chance of winning it all back. But as we’ve seen with wave election years, even though Republicans have some pick-up shots this year, a blue year could mean Democrats hold all their seats and sweep the competitive Republican ones.

There’s also the possibility that Republican State Senator Dan Zumbach becomes their party’s nominee for Secretary of Agriculture. Were he to win in November, that would create a special election in his SD 48 district, based in Delaware, Jones and rural Linn counties.

So, while Hart’s departure from her senate district makes things a little bit better for Republicans’ legislative hopes, the senate races in 2018 are more likely to turn on overall electoral trends.