Primary contests for open, safe legislative seats for either party often draw multiple candidates and generate serious competition. Such is certainly the case for Democrats in Senate District 37, where fundraising and spending may set a record for a legislative primary. Four Democrats are running in the Johnson and Cedar County-based seat to replace retiring Senator Bob Dvorsky. Zach Wahls and Janice Weiner are the only two with substantial support in the race, and both have put together strong campaigns.

The two bring unique, compelling biographies to the table. Wahls, 26, gained national fame from his 2011 speech on the floor of the Iowa House about his two mothers. He continued in prominent roles with the Scouts for Equality campaign. Some in the state see him as a potential leader in the party for years to come. Wahls graduated from Iowa City West High School, attended the University of Iowa and will soon finish a graduate degree at Princeton.

Weiner, 60, served as a diplomat for over 25 years, working all over the world, including in East Germany, Belgium, Turkey, Poland, Mexico and Canada. She’s an adoptive mother of two girls and worked as a field organizer locally for the party in 2016. Born and raised in Coralville, she attended Princeton and Stanford Law School.

The two got in the race back in December, with Wahls making a big splash when he did. He has built up a large social media following over the years (32,000 follow him on Twitter), aiding in his astonishing $54,000 raised in the first 11 days of his campaign.

Wahls followed that up with a few more good fundraising reports, raising $129,312 overall for the primary, a huge amount for even the most competitive legislative races. And as Wahls told Starting Line, it was accomplished largely online (including donations large and small); Wahls himself has only spent about 90 minutes doing donor call time in the campaign. They raised $4,000 in just a few hours right before the latest fundraising deadline simply through a series of tweets asking for donations.

Weiner has raised $35,520, including $9,000 in personal loans from herself. That’s plenty good for these kind of contests, and she has a very professional direct mail operation doing her advertising.

As with any campaign, though, money isn’t the whole story. And local activists believe that Weiner has kept this race much closer than what many originally assumed early on.

Part of that is thanks to Weiner’s role as an organizer last cycle.

“When I worked as a field organizer, I developed a volunteer base, and it turns out most of them are from this district,” she told Starting Line. “I knew they were already really good canvassers and good on the phone, so we didn’t have to do much training.”

She needed a little more help than Wahls did with establishing her name I.D. at first. They did that with some billboards and an early mailing, but now are mostly focused on doors, phones and small events like any candidate. EMILY’s List gave her a boost this past month when they chose Weiner as one of their six Iowa legislative candidates to endorse. As in other primaries on the ballot, having one woman in a Democratic field may be a big advantage this year.

Both have been knocking on a lot of doors across the district. Wahls ran into several people he had already met on the campaign trail when Starting Line joined him at a well-attended firefighter pancake breakfast in Solon, a smaller town in rural Johnson County. Wahls worked the breakfast line, introducing himself and asking people what they cared about.

“I want some younger people in there, a new generation,” one woman who was supporting Wahls told him.

Wahls ran into one of his former scout masters, and he leaned on that background, rattling off some of their mottos, to relate his personal story to voters.

“Politics’ a dirty business, that’s why we’ve got to clean it up,” Wahls told one group of people. “I’m an Eagle Scout, grew up in the Boy Scouts. I’m trustworthy, loyal, helpful, friendly, courteous, kind, obedient, cheerful, thrifty, brave, clean and reverent. I want to bring that back to politics.”

One woman he met was with her nephew, who she explained had a learning disability. She was frustrated with the new Medicaid privatization and the problems it was causing.

“I know United isn’t doing a very good job paying the bills. You hanging in there, though, you doing okay?” Wahls asked the young man. 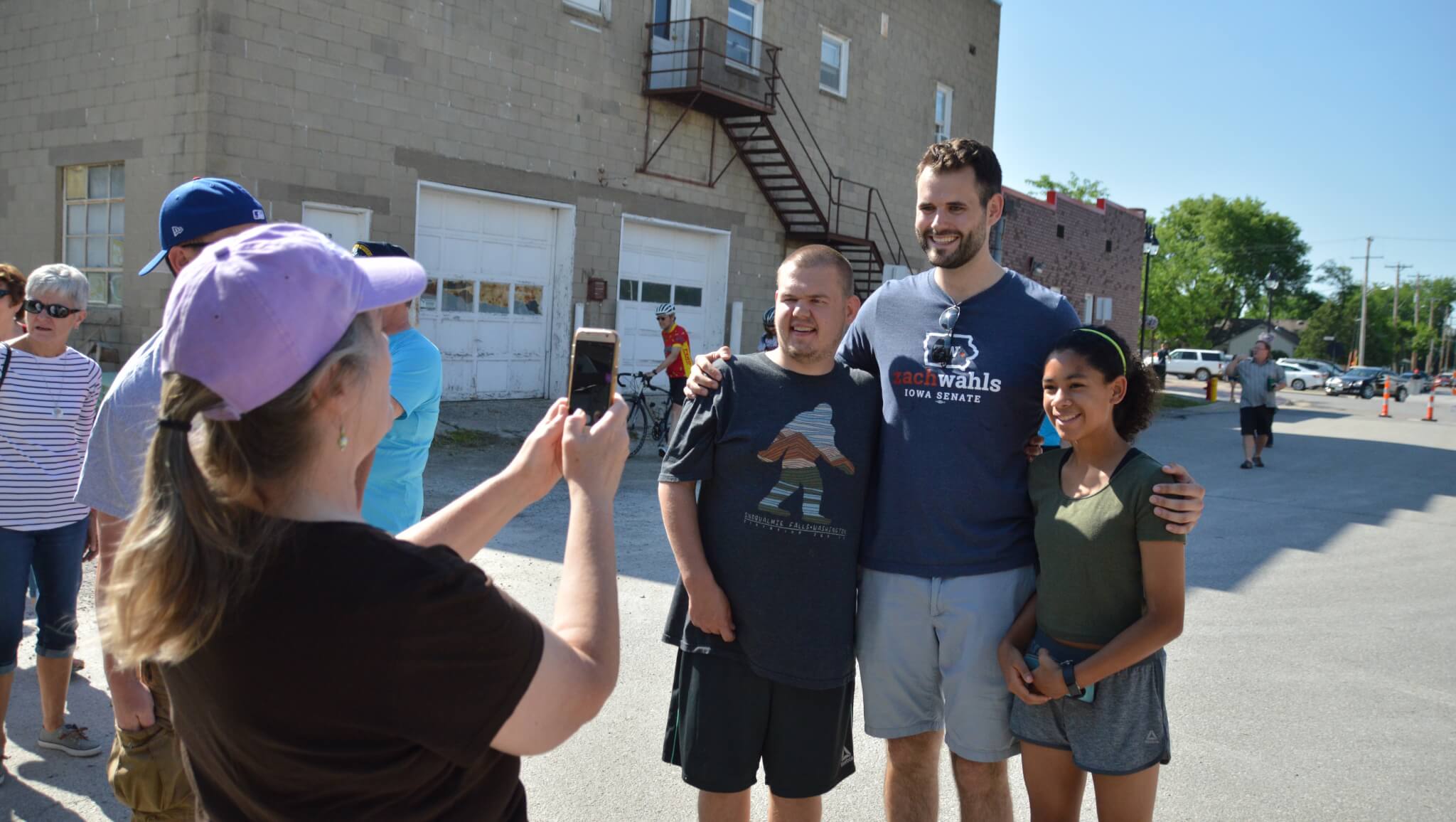 “It has blown me away how often that’s come up when I’m out on the doors,” Wahls later told Starting Line. “UHIC is basically becoming another MHI because of how many people are piling up at the University. They literally can’t discharge them because no one will take them.”

Weiner said she’s heard much of the same topics while traveling the district. While there aren’t too many policy differences between the two, both acknowledge that they each focus a little more heavily on separate topics. For Weiner, that’s childcare.

“We have this enormous shortage of childcare in the state, plus it’s expensive,” Weiner explained. “If we want people to be able to gain skills and move up the ladder and get off childcare assistance, we can’t have them come to a certain point where if you earn a little bit more, you get no subsidies at all … You need to have an off-ramp instead of a cliff. That’s one of those issues I think you can sell across the political spectrum.”

She added that childcare access could be a policy that she could get done working behind the scenes with members of both parties, hopefully keeping it from becoming a partisan issue to give it a better chance of passage.

Wahls has been particularly proud of the support he’s gotten in the race from younger voters, including a lot of high school students, who make up the bulk of his volunteer base. Much of that enthusiasm has been driven by gun reform concerns, especially after the Parkland shooting. Wahls’ campaign held a meet-and-greet right after a march and got around 50 students at it. One high schooler has already knocked on 500 doors for Wahls’ campaign.

“If we are really able to engage high school and college students and turn them out in November, that’s going to be a huge part of a Democratic victory,” Wahls said. “Many of them are upset about cuts to higher education. Students are aware of what’s going on at the Statehouse.” 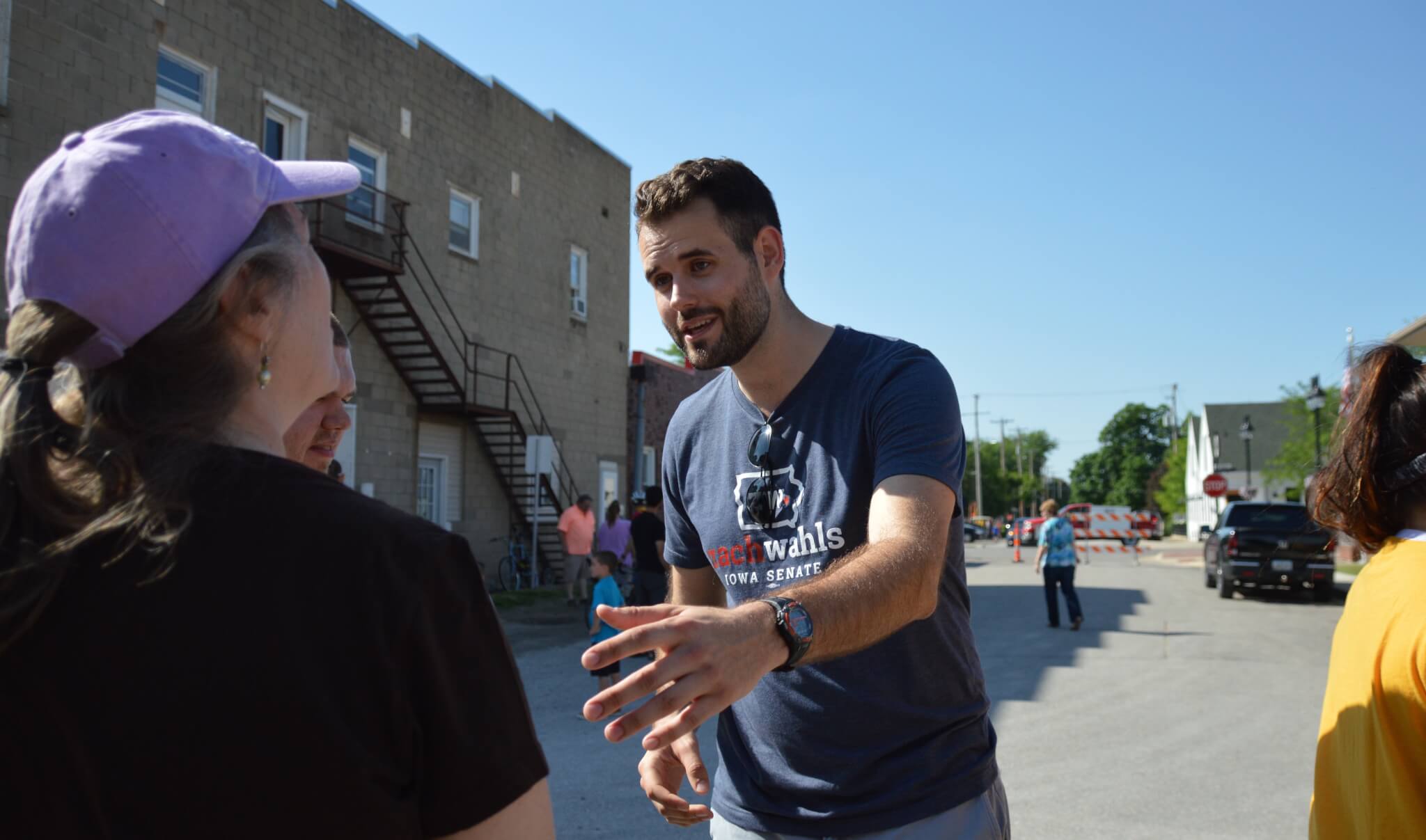 The other main choice in the race largely boils down to their backgrounds. Weiner noted that her experience as a political officer during her diplomacy work would serve her well in the Senate.

“I was analyzing the political situation there and meeting people across the political spectrum,” she said of her work overseas. “The goal was to listen to them, understand them and figure out what made them tick so I could get a better picture of their motivations, how the country was functioning and what we should tell Washington. And how we could get a foot in the door when I needed to. Didn’t mean I liked them or agreed with them, but I needed to be able to talk to them.”

She added that she has more of a union background than some may realize. Her mother was a union organizer in New York City, and her father was even named in part after Eugene Debs. She was also a member and leader of her bargaining unit in the foreign service.

“What I believe I have to offer is someone with enormously relevant professional and personal experience,” Weiner said. “I am who I am. I think one of the reasons I’ve connected with people is because I’m genuine … I’m always willing to learn. That’s something from the foreign service – when you go to a new country every three years, I went in assuming I knew virtually nothing. That’s who I am: getting out, meeting people, learning issues. That’s who I’ll always be.”

Aside from his work on LGBTQ issues, Wahls’ biggest appeal is one of providing an exciting, new generation of leadership in the Senate and the party. In a state that has been lacking in younger Democratic leaders in recent years, that’s a consideration to some. So too is his ability to raise money and help Democrats win seats around the state so that the party may retake the majority soon enough. Wahls hinted that he hasn’t even fully activated his nationwide fundraising network yet.

“This race is a little bit less about policy differences, it’s more about what are you looking for in your next state senator,” Wahls said. “It is important to have somebody who, like Bob [Dvorsky], is able to raise money for the party, go campaign with other Democrats. Help out the Vicki Brenners and Amber Gustafsons, the candidates who are really on the bubble. I absolutely view that as a big part of the responsibility of this seat. Helping to rebuild the Democratic Party. There’s a huge amount of work to do.”

He promised to work hard in the Fall to boost the entire Democratic ticket, from turnout efforts to fundraising assistance.

Either would enter the Senate as a junior member in what would probably be the minority party. Both could be standout legislators in their own way. Democratic voters in Johnson, Cedar and a tiny bit of Muscatine County will make that choice on Tuesday.