With just 18 days left until the June 5 primary, there’s more developments from the campaign trail every day than we have to time to write about. Like our story last Friday, here’s our end-of-week roundup piece for all the campaign news we didn’t do full stories on.

State Representative Abby Finkenauer begins airing her second TV ad for the 1st District primary today. The ad is titled “Good Lives” and focuses in on a working-class families message. Finkenauer is seen talking with locals in a restaurant while she discusses her parents, fighting for working people in the Legislature and how she’s still paying off student loans. She then turns her attention to Rod Blum’s vote on the Affordable Care Act, adding that the fight is personal for her.

It’s a piece that has more of a general election feel to it, though it presents just as good a introduction to Finkenauer to primary-going Democrats. Her big focus in this race has been to project a working-class, scrappy image to voters, as opposed to heavily poll-tested themes that we’ve seen in Iowa Democratic congressional campaigns before. And this seems like the kind of messaging and personality that’s aimed at winning back the blue collar voters in the 1st District that abandoned the Democratic Party in 2016.

When you get into the final weeks of a campaign like this, it gets increasingly difficult for any candidate’s ads to stand out when voters are being inundated on their TV, online and in their mail. But Cathy Glasson’s latest TV ad about gun violence should certainly cut through the noise.

In a new spot titled “Enough,” middle and high school students who were part of student-led marches talk about how they can’t vote for stricter gun laws – because they’re not old enough yet. Instead, they encourage viewers to support Glasson for governor if they support better background checks, an assault rifle ban and gun violence restraining orders. Glasson’s only appearance in it is at the end with the students to say “enough is enough.”

All aboard the Hubbell bus. Well… the RV. Patty Judge is lending her Winnebago to the Hubbell campaign to use on their final statewide tour before the primary. Hubbell is kicking off a 14-day, 35-event tour around the state to meet voters and close out the race against his Democratic opponents. He and about 50 supporters gathered outside the Capitol this morning for a brief rally and to roll out the RV.

“My Winnebago is wrapped and I’m really proud of it!” former Lt. Governor Judge commented to Starting Line. 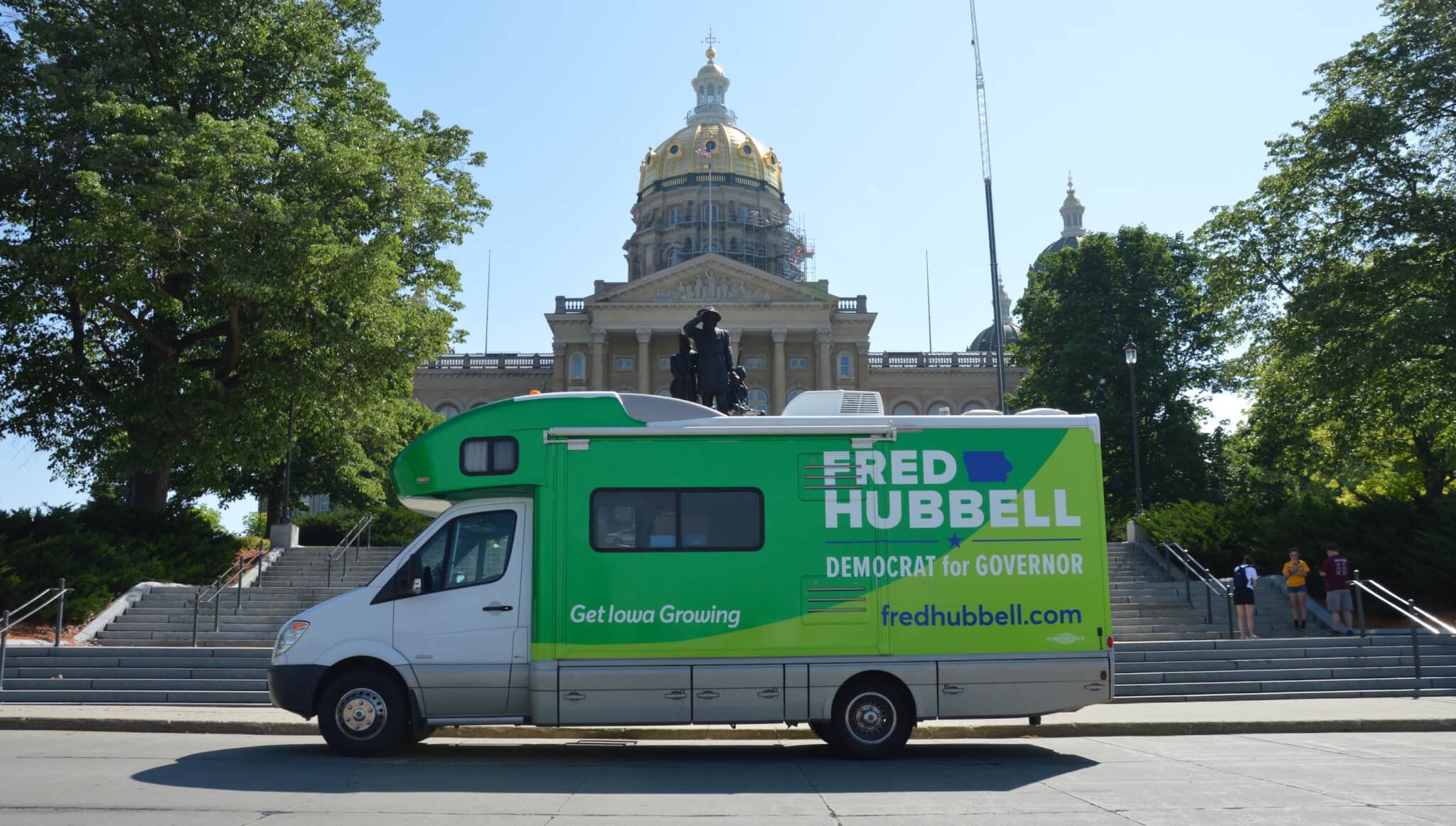 Hubbell also received the endorsement of Mayor Frank Cownie this morning. Cownie told the crowd that he’d worked with Hubbell for many years and knew that Hubbell was someone he trusted to actually accomplish what he promises in the campaign.

“Fred Hubbell really represents what Iowa needs,” Cownie said. “When he says [he’s] committed to education, I know he is.” 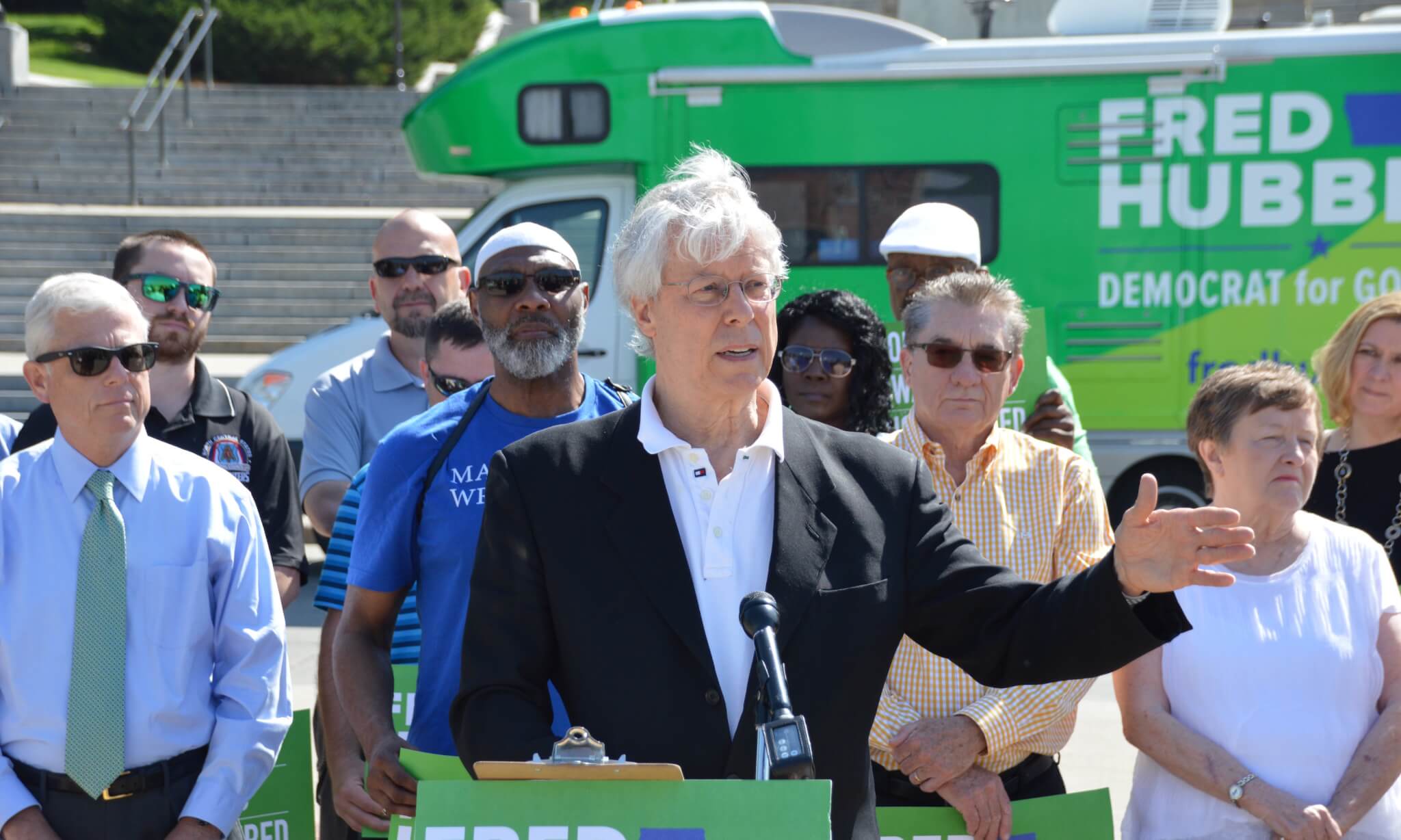 In his Des Moines Register editorial board meeting yesterday, John Norris really teed off on Fred Hubbell, ripping into Hubbell’s experience and message and insinuated that Hubbell may have some surprises in his background.

“Fred is quintessential Des Moines,” Norris said. “I don’t think he connects with rural Iowans. He doesn’t connect with small business owners like me. Listen, he was a business executive, but he inherited his business position. He didn’t start it from scratch like I did, borrowing $5,000 from my folks, who were hard-pressed. I think I identify more with that small business owner in that rural community and those farmers than Fred.”

Norris also explained he had gone through FBI background checks when he worked in federal government, contrasting that with what he believed was potential dangers in Hubbell’s background.

“There’s some issues in Fred Hubbell’s background that Kim Reynolds will know about that may become issues in this campaign,” Norris said. “But we really haven’t had a chance to have any vetting. My whole life has been out there on display, going through two senate confirmations, there’s no surprises. I think the element of surprise [is with Hubbell].”

Norris did not, however, publicly specify what that is.

Norris also suggested Hubbell was being disingenuous when Hubbell claimed he wasn’t a politician or was a newcomer to politics.

West Des Moines businesswoman Cindy Axne is aiming one of her final messages of the campaign at the female vote in her 3rd District primary. It features images of young girls as Axne talks about Donald Trump trying to hold women back. A narrator lists off Axne’s support of equal pay laws and her pro-choice stance.

The reporting period that went through mid-May ended on Monday for statewide and legislative candidates. Campaigns’ public reports for that is now due on this upcoming Monday (not this Saturday as some have thought). Follow along with Starting Line for full coverage of what everyone has raised and what they still have in the bank for the final two-week push.

The big Des Moines Register poll is on its way. A poll for the Democrats’ gubernatorial primary will be released on Saturday at 4:00 p.m. Another one for Democrats’ 3rd District race will be released Sunday at 4:00 p.m. So, if you’re wondering what Starting Line had planned for the weekend, there you go. Check back here for our analysis on the polls after they come out.