A guest post from Mark Masterson (pictured on the right)

I would like to introduce myself.  I’m Mark Masterson, and Monday was my first caucus experience as a Democrat. I work as a state employee (a correctional officer) at the Mount Pleasant Correctional Facility, and after I saw what the Republicans at the Capitol did to public employees last session, I changed my party affiliation from Republican to Democrat. With that said, I’m new to being involved in politics at any level, but was excited to get the Governor’s race started and wanted to get involved so my voice was heard.

When I attended the caucus on Monday, I was greeted at the door by Nate Boulton supporters that recognized me from the Facebook posts I make to share my support for Nate. All of Henry County caucused in the United Methodist Church, and some people like myself had to drive on gravel roads and County highways (yet to be plowed) over 10 miles to get there, but it was really great to meet more Democrats in my county and talk about issues that Democrats care about. After some introductions and discussion about what was going to happen at the caucus, we proceeded. The process was seamless and moved fairly quickly once we went over the rules.

I was thrilled to see Senator Rich Taylor and Mr. Jason Moats there speaking to everyone about how vital the governor’s race is for Iowa’s future, because it really is! Several participants spoke on the Republican trend of cutting services which need to be fully funded to balance the budget and fund tax credits for big companies. Republican leaders in Des Moines claim to be for the people, but their budget priorities include slashing what Iowan’s need to be successful, such as quality education.

Jason is running for House District 84 and is a fellow correctional officer with me. After hearing from Senator Rich Taylor and Mr. Jason Moats encouraging us to support Senator Nate Boulton, and a third gentleman also expressing the same hopeful opinion of electing Nate, other caucus-goers were encouraged to speak for some of the candidates by the Chairperson. Honestly, the room was overwhelmingly filled with Nate Boulton supporters. Ten people from my precinct attended our caucus and we had four delegates to elect. We went unanimously for Nate without breaking out into preference groups.

Mount Pleasant is a small town that sticks together when things get tough, and things are pretty tough now. Our prison campus in Mount Pleasant has seen some difficult-to-understand changes. The largest tough change was watching helplessly as one of the State’s best options for mental health was closed, forcing many people to self-medicate, self-harm and to otherwise commit crimes that landed them in the prison system.

When the Department of Corrections houses these people (despite our best efforts and intentions), we often times fail to meet their complex needs. Because of the budget reductions and the destruction of our contract by Republican efforts at the Capitol, we don’t have the staffing to handle the increase in offender population.

To be frank, no one wins in this situation, and that’s why this election is so important.

We need to change the Republican leadership at the Capitol to turn our state around, and my precinct knew exactly who could do that. I was elected as a delegate and can’t wait to vote for Nate on June 5th in the primary, at the State Convention if it comes to that, and again in November. I was also elected to the platform committee so I can safely say that I’m involved now.

The snow was still falling at 7:00 p.m., and that kept people away from the caucus I’m sure, but we had a good crowd of about 60 people despite the winter storm. It was a great opportunity to visit with fellow Democrats from across the county and discuss the issues that bad decisions made by Republicans in Des Moines have caused us here in Southeast Iowa, and what we could do about it. IPERS, collective bargaining, education, the funding for the court system and access to affordable healthcare, along with the empty Mental Health Institute building in Mount Pleasant, were the topics discussed at my table. 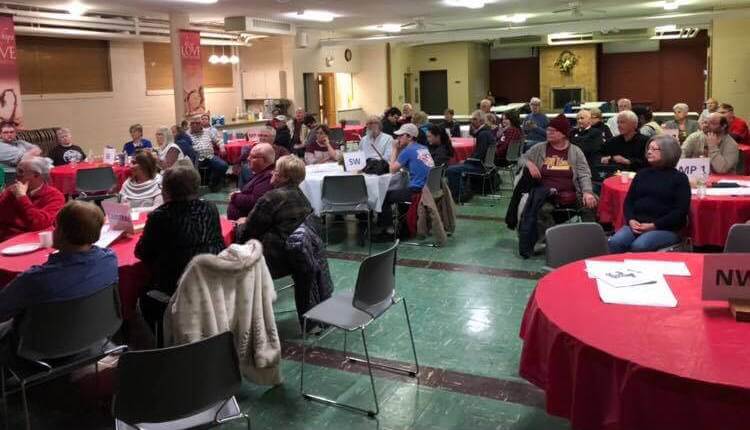 I’m happy that I went to the caucus, and I’m glad that my friends attended as well. I learned a lot, and hope to build on my knowledge and involvement, especially with Nate as our next governor!