You might say that weather conditions for tonight’s Iowa precinct caucuses were less than ideal, but precinct caucus rooms were still packed with enthusiastic Democrats across the state. As of 11:30 p.m., with 80% of their precincts reporting, the Iowa Democratic Party had a “soft report” of 8,599 attendees. They expect that number to top 9,000 once the remaining precinct information is sent into headquarters (Starting Line will update this as more is known).

That total already tops the turnout for the off-year caucuses in 2010 (about 5,000 people) and 2014 (about 6,500 people) – and those years didn’t have six to eight inches of snow get rapidly dumped on the state just before caucus night. 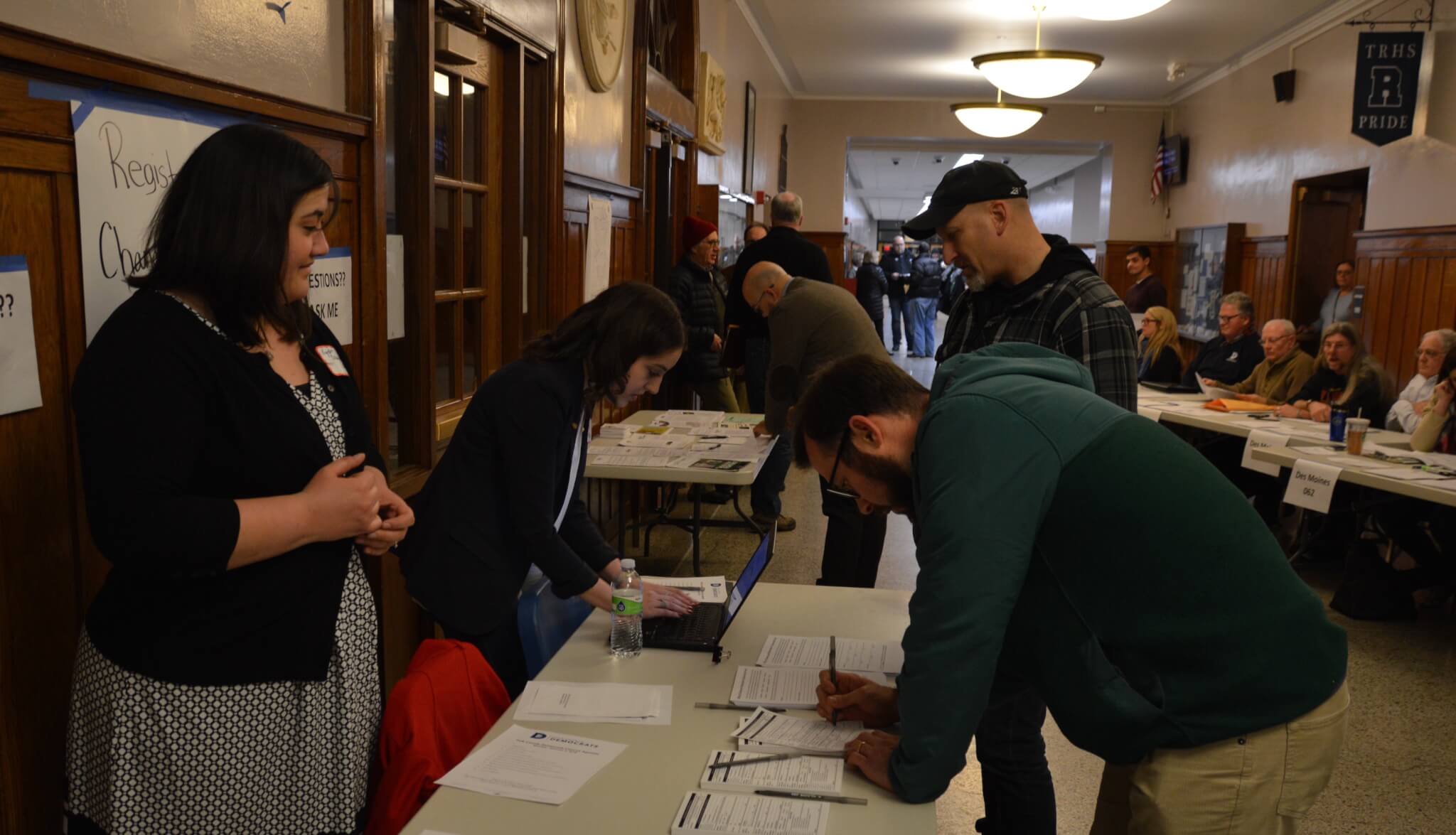 The blizzard-like conditions badly hampered turnout in some areas, especially in rural locations where caucus sites were consolidated into one central location. But in the more politically-engaged regions of the state, Democrats still trudged through the snow and cold to meet their neighbors, conduct party business and elect delegates and alternates to the county conventions. Those delegates may later decide the party’s gubernatorial and 3rd District nominee if no candidate in those races get 35% in the June 5 primary.

Starting Line attended the caucuses at Roosevelt High School, which covered everything in Jo Oldson’s house district. It was certainly not the most representative site, considering that it has the hyper-engaged South of Grand and Waterbury neighborhoods and three gubernatorial candidates (Fred Hubbell, Andy McGuire and John Norris) and two congressional candidates (Theresa Greenfield and Eddie Mauro) live there. But the activism did produce some very interesting observations. 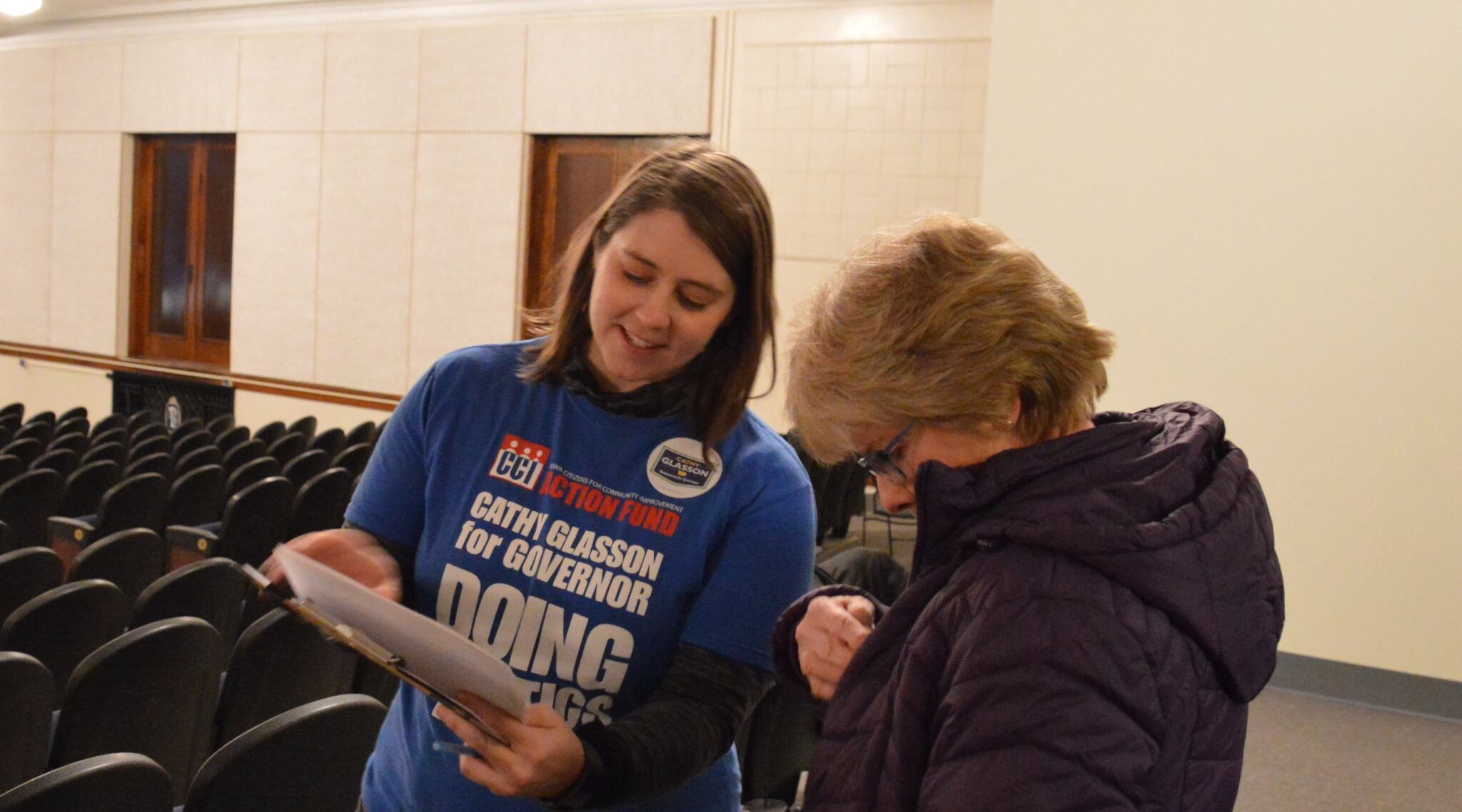 Several campaigns were out in full force there, with members of CCI greeting attendees and encouraging them to join Cathy Glasson’s group. Hubbell’s campaign had multiple volunteers on site with clipboards with lists of expected supporter names on them. Norris’ wife and three sons were on hand – the candidate was at caucus sites in Waterloo. 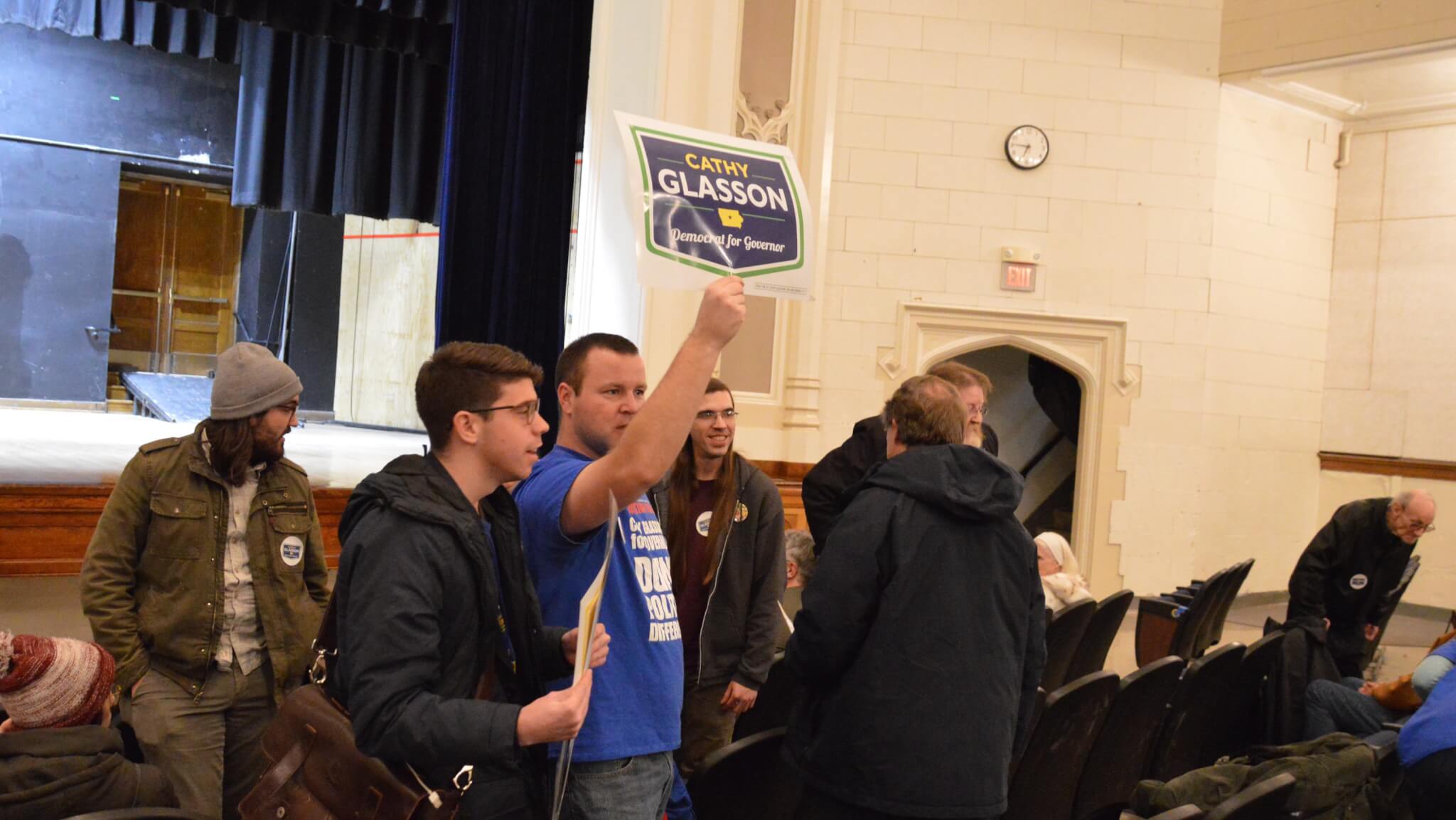 The attendees at Roosevelt were treated to quite the candidate forum – Hubbell, McGuire, Greenfield, Mauro and state auditor candidate Rob Sand all addressed the combined crowd before they split up into precinct groups in smaller classrooms. 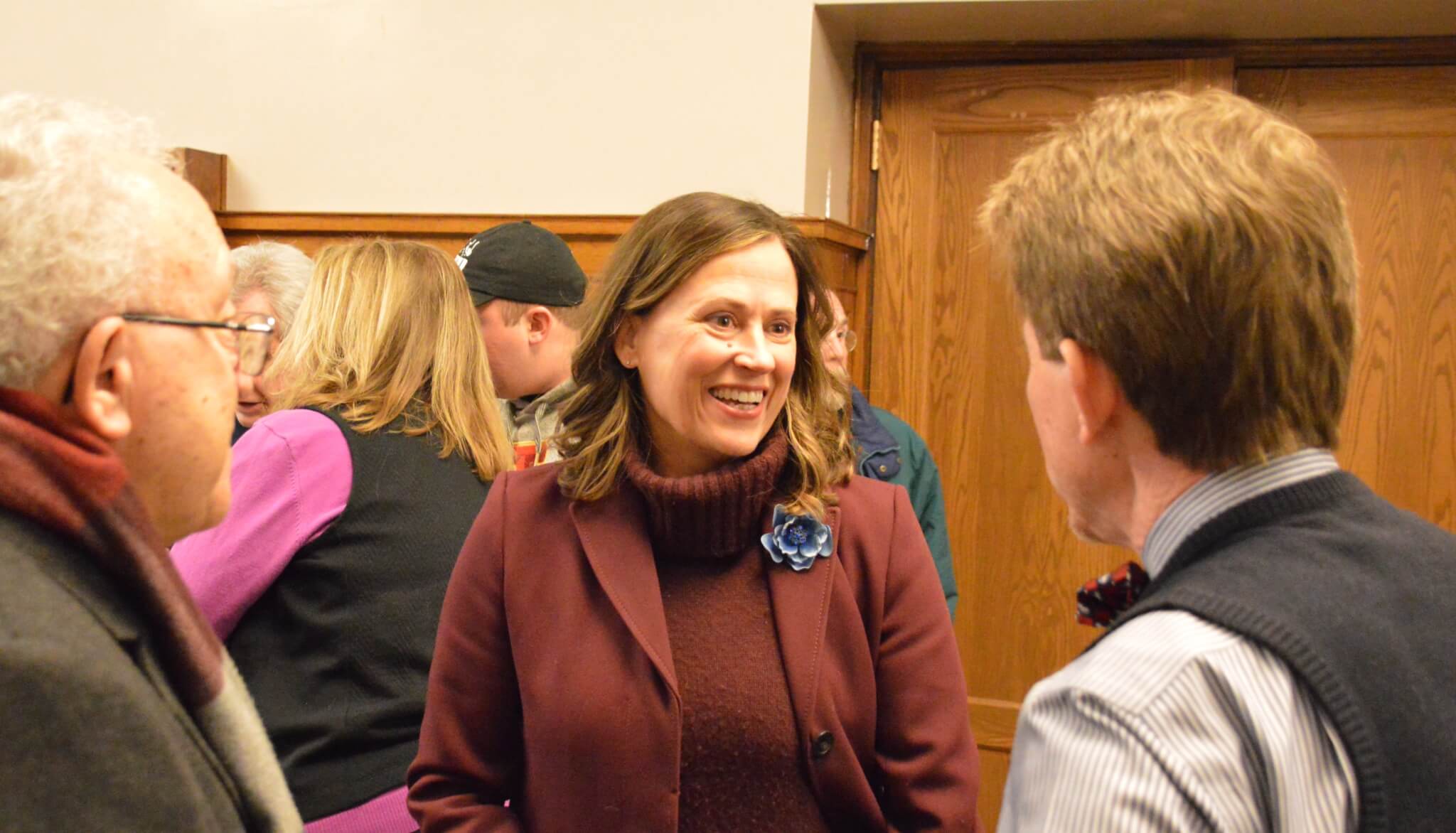 That’s where the most fascinating aspect of the night played out. Nearly every precinct saw very different tactics employed by campaigns, the precinct chairs and the attendees. That shouldn’t be a surprise, as none of the campaigns are built at this point to run a full statewide Iowa Caucus operation where every single precinct has a group of strategically-trained volunteers.

In the precinct that Hubbell and McGuire live in, just one person raised their hand when asked if they wanted to divide by preference group, causing it to fail. How things went from there depended on the precinct. In some with smaller attendance that didn’t break into preference groups, it was simply a matter of, “Okay, who wants to be a delegate?” with not much more thought than that. Any candidate may have easily gotten their people through that process. In others that didn’t do preference groups, each person running for delegate gave a short speech for themselves and made clear who they supported in the gubernatorial and congressional primaries. That sort of hybrid way of doing it still let attendees get a sense of which candidate was benefiting from their votes.

About half the precincts Starting Line saw did break into preference groups, often (though not all) with the Glasson supporters pushing to do the preference breakout. In some precincts, things played out much like a presidential caucus – two or three candidates received one or two delegates, while uncommitted only got one or two. In others, Glasson typically received a few delegates and the rest of the precinct stayed as uncommitted. 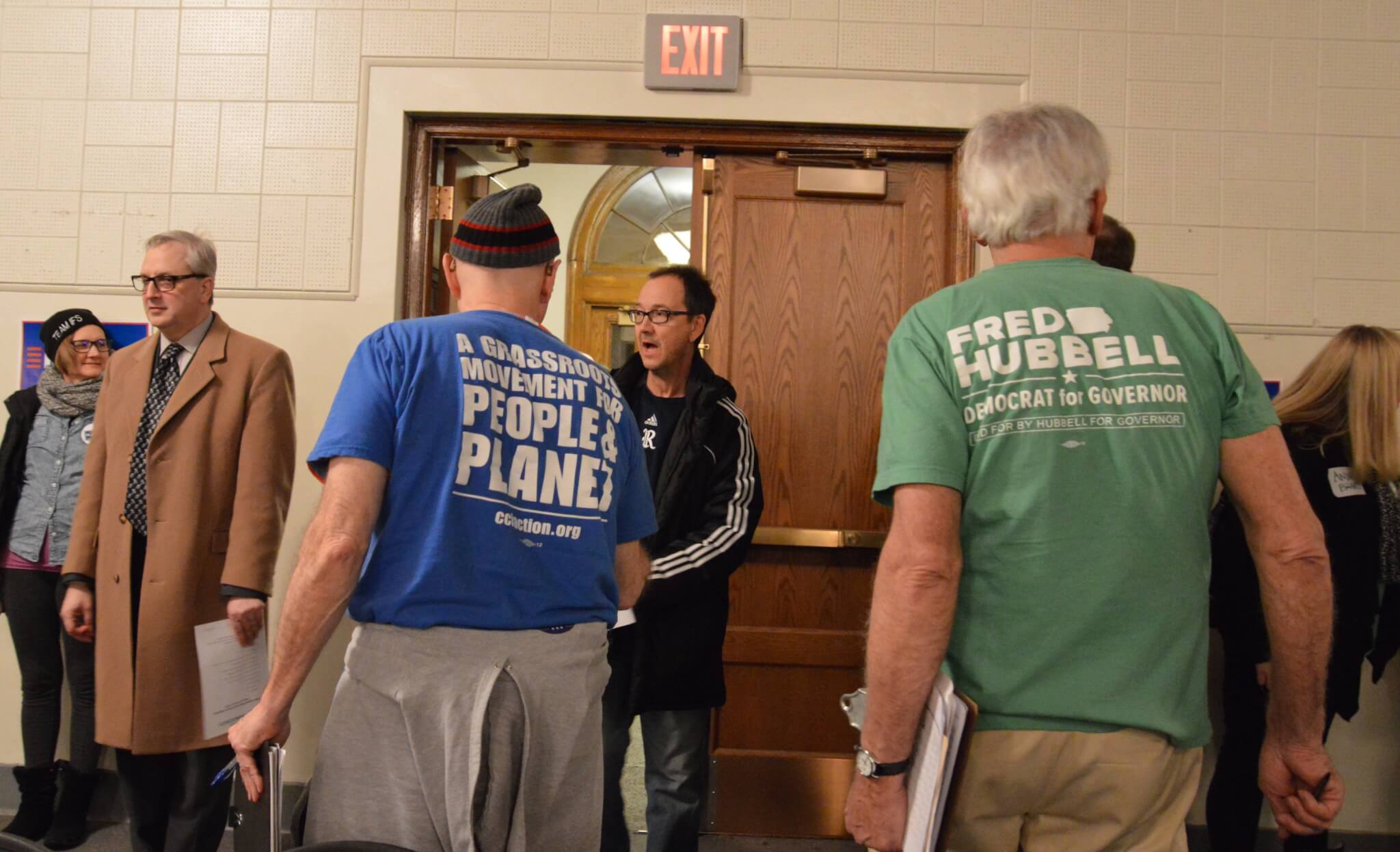 Each major campaign has their own tracking system for delegates, and they’ll get a full list of delegate and alternates’ names. They likely know internally just how well they did when they compare that to who they’ve ID’d. Even when the party releases the candidate delegate breakdown in a week or so, it will be near impossible for outsiders to figure out how well candidates did with so many uncommitted delegates and generic, non-preference group delegates. But campaigns that saw a good percentage of the preference group precincts result in delegates for them will have something to hang their hat on.

Fortunately for Democrats, most of the Roosevelt precincts had a relatively chill atmosphere to them. There were no major arguments over preference groups or harsh words exchanged (well, that Starting Line saw, anyway). There was certainly the potential for that, but the snowy conditions may have mitigated it some by pushing down turnout. Smaller groups sometimes produce more cordial interactions when there aren’t as big of fights over limited delegate positions. 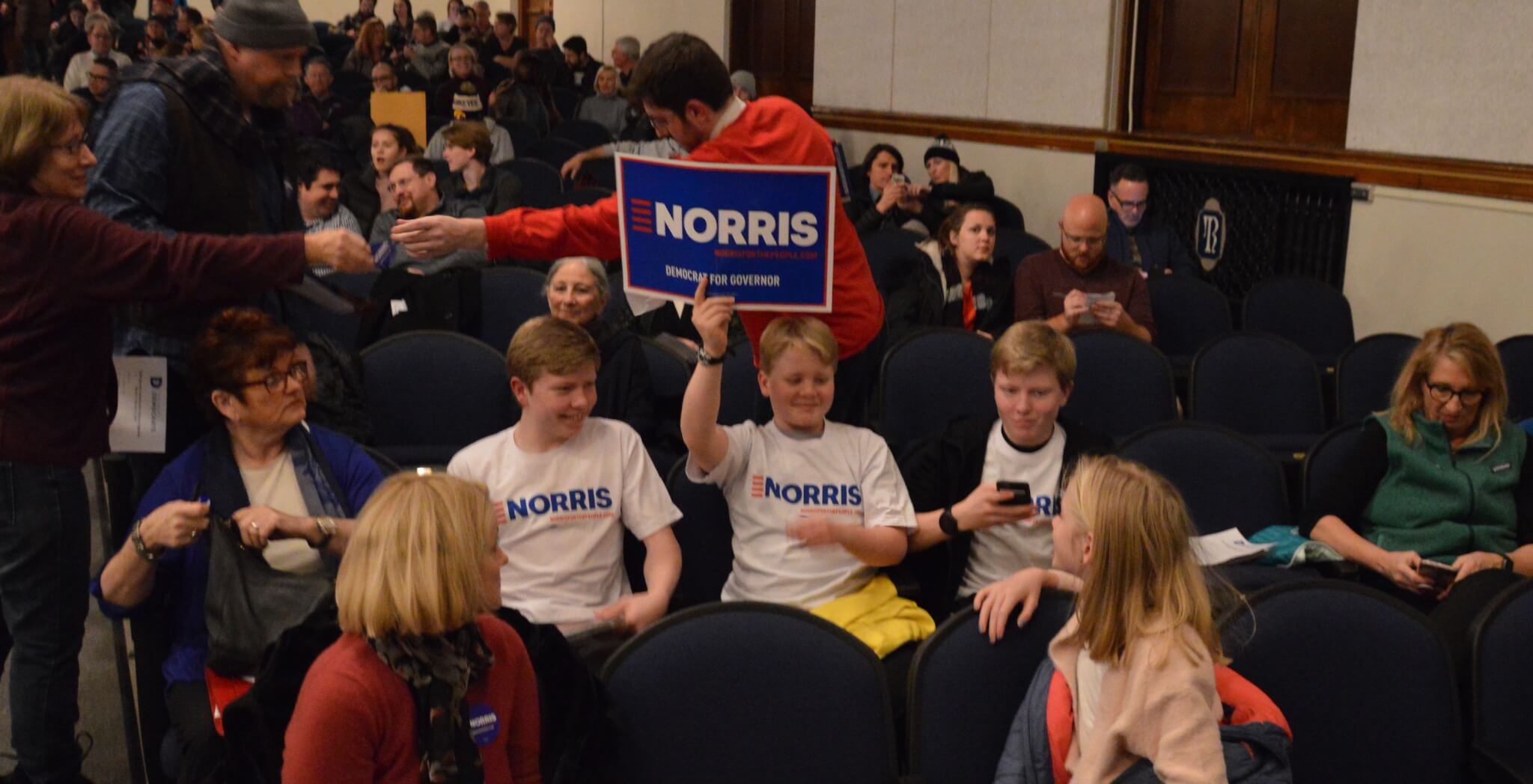 While turnout was particularly strong at Roosevelt (one precinct had over 100 people show up), that did not seem to be the case around the state. Posts from Democrats on social media showed lower turnouts in smaller towns and even parts of some cities, where there were just a few more people present than actual delegate slots. There’s not a lot of campaign strategizing to be done in those situations. Still, it’s far higher than in past off-year caucuses. 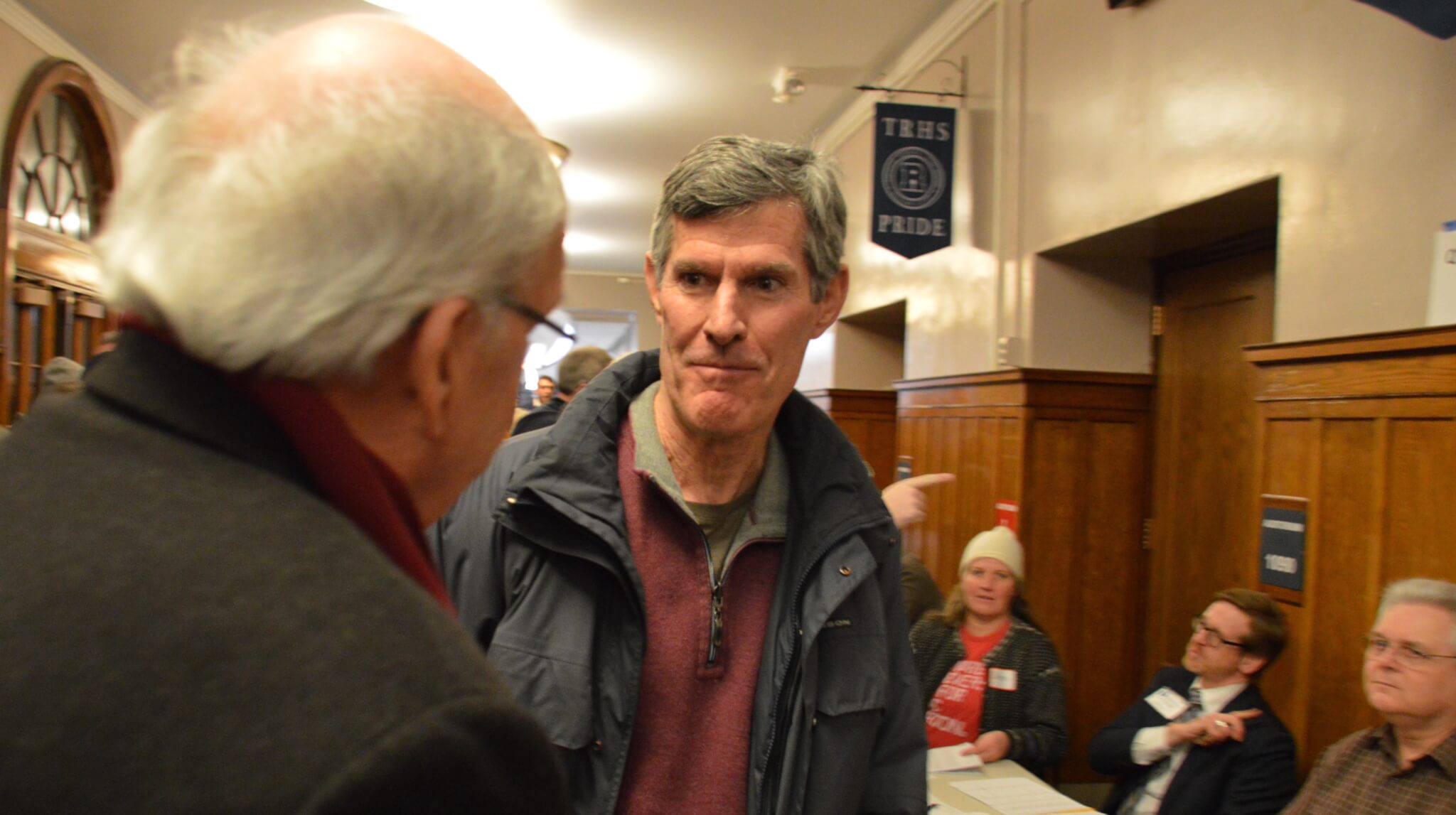 Glasson seemed to do particularly well in Iowa City and Ames, and looked to do pretty well in most places that did preference groups. Boulton seemed to almost always get on the board with delegates, either in first or second place. Hubbell appeared to pick up at least one delegate in many precincts that broke into preference groups. All campaigns proclaimed the night a success – and it certainly was in terms of party building, at the least.

Behind the scenes, campaigns gave the state party high marks for their handling of the potentially-complicated precinct caucuses. With less staff than in presidential caucus years and considerably more interest due to the gubernatorial implications, the IDP’s job of preparing volunteers to cover just under 1,700 precincts was no easy task. The weather certainly didn’t help things, but the caucuses couldn’t be postponed because of how the Iowa code is written. 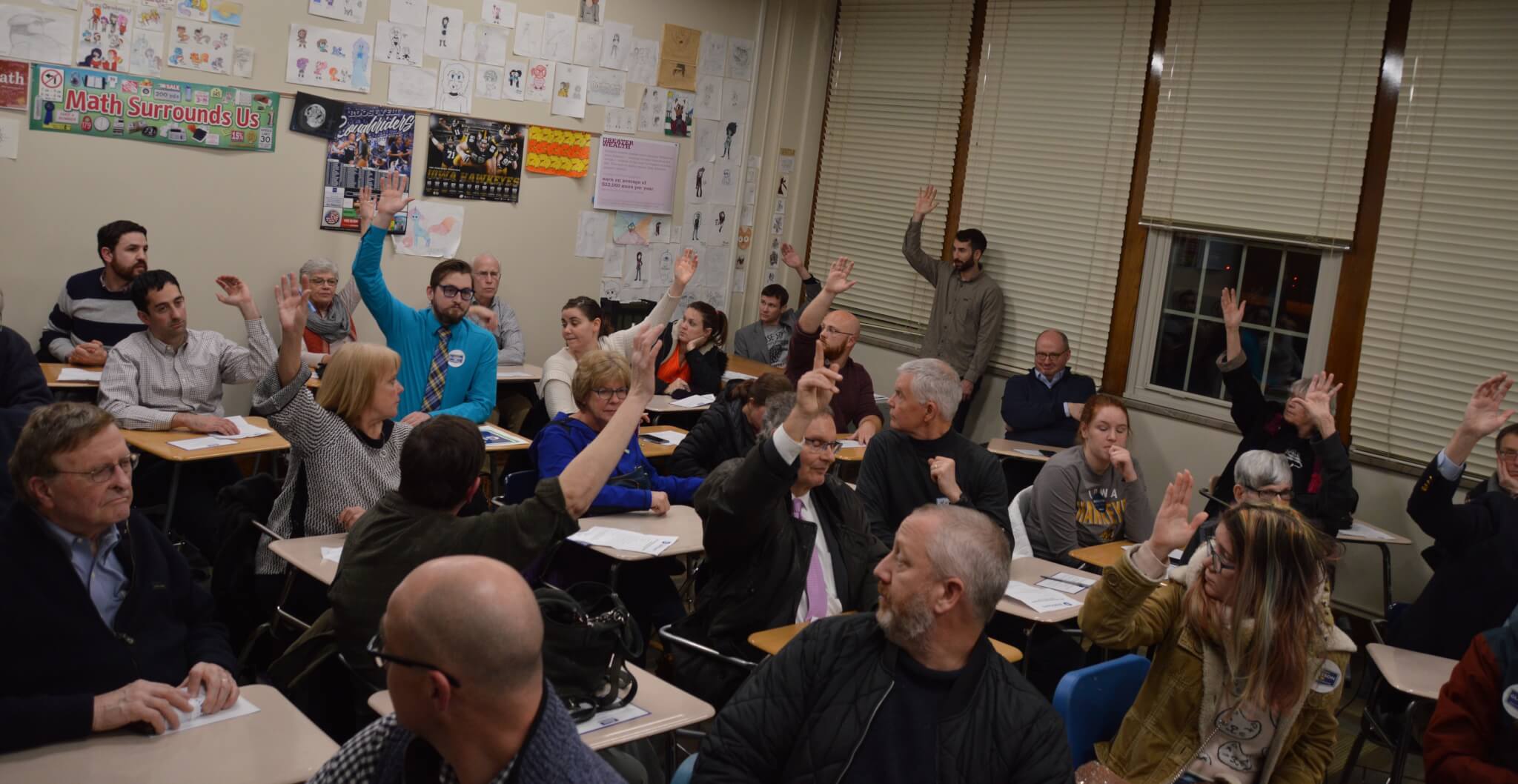 The snow may have robbed the party of bragging rights that this caucus was three or four times larger than past off-year caucuses, but they were substantially better attended than the Republican caucuses, held on the same night. That gives Democrats one more marker of momentum to point to as they head into crucial elections for governor and the Statehouse in 2018.

Delegates and alternates elected tonight will go on to the county conventions, which are held on March 24. From there, they can run to be state and district delegates.