Iowa Republicans seem rattled heading into a special election for a usually reliably-Republican Iowa House seat in Sioux City this month. Starting Line has learned they’ve placed a $35,520 TV ad buy to run from January 4 to January 9, and will likely spend even more for the final week of the January 16 election.

The Sioux City media market is extremely cheap, so that amount of money should blanket the airwaves there for one week. Republicans are spending $19,865 on KTIV, $9,910 on KCAU and $5,745 on KMEG. By the time they make their ad buy for the week after, along with costs for mail, it’s entirely likely they spend close to $100,000 to defend this seat.

That’s a lot of money to prop up Republican candidate Jacob Bossman, a Chuck Grassley staffer, in his campaign against Democratic candidate Rita DeJong, a former local school principal.

House District 6, which covers the south end/Morningside area of Sioux City and Sergeant Bluffs, has been represented by a Republican since 1992. Donald Trump carried it in 2016 by 30 points, winning 62.4% to Hillary Clinton’s 32.5%. Of 100 Iowa House seats, it’s the 29th most-Republican if you go off of Clinton’s performance. By nearly every measure, no one would have considered this a competitive seat just a few weeks ago.

But Republican Party of Iowa Chair Jeff Kaufmann called last month’s special election for Senate District 3 in Sioux City a “wake-up call.” Despite Trump winning that seat by 41 points in 2016, Democratic candidate Todd Wendt came within just nine points of defeating Republican State Representative Jim Carlin (it’s part of a trend in Iowa’s special elections – Democrats have outperformed the Trump/Clinton margin by 30+ points four times). Wendt even carried the half of the district that was Carlin’s house seat, the race now up for grabs in the newest special election.

Kaufmann specifically had that result in mind when the Republican Party sent out a letter to their voters in House District 6 a few weeks ago. The entire thing is worth a read: 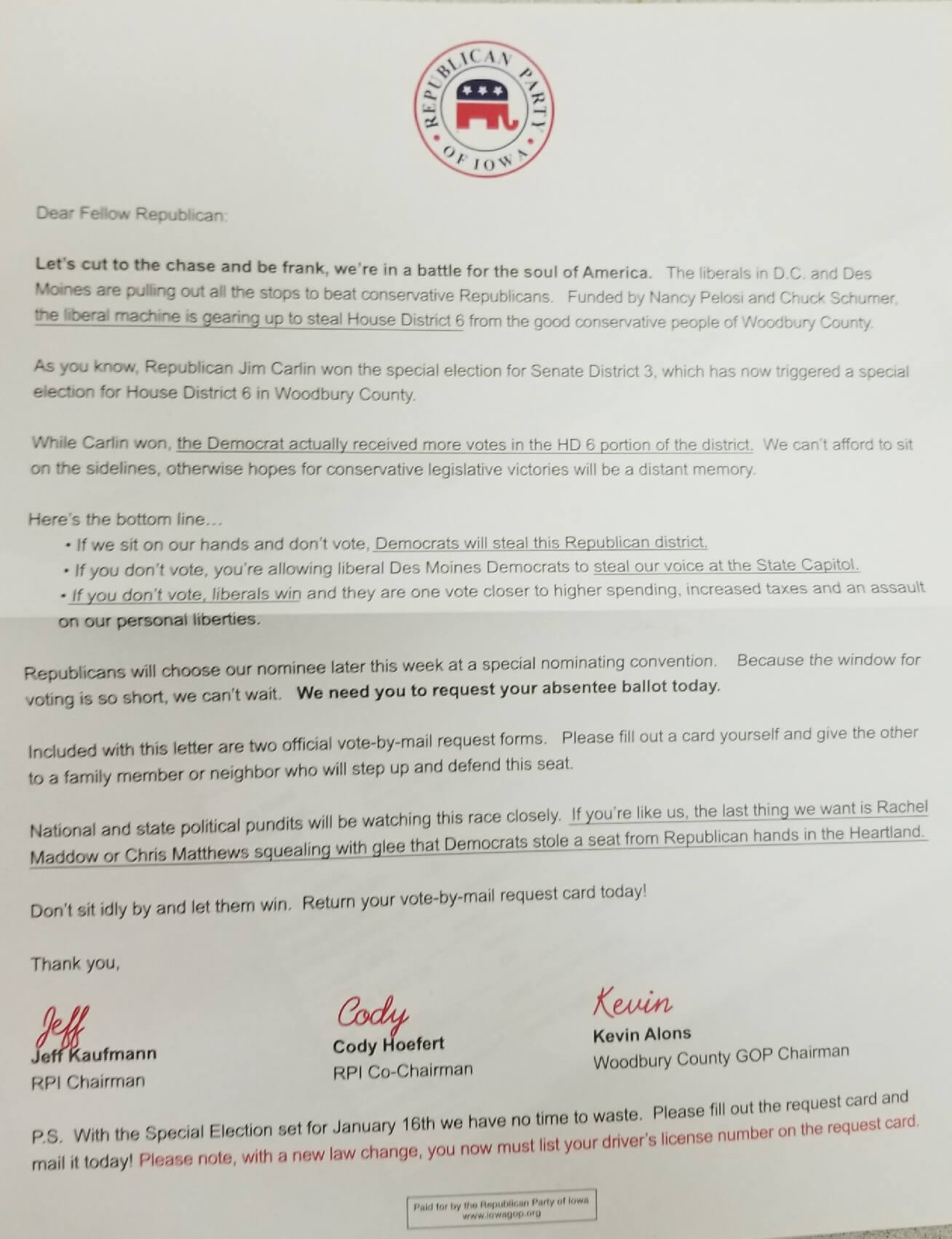 There’s a number of interesting things with this letter, including their framing of how Democrats would “steal” the district if Republicans stayed home and didn’t vote (most people just call that “winning”). But most amusing is the apparent liberal boogeymen/women that Republicans think will motivate their base to get out to the polls.

“If you’re like us, the last thing we want is Rachel Maddow or Chris Matthews squealing with glee that Democrats stole a seat from Republican hands in the Heartland,” the letter read.

Yes, apparently it is not conservatives’ steadfast beliefs on tax cuts, abortion or school choice that will motivate them to vote for the Republican, it is the dark, terrifying image of Rachel Maddow “squealing with glee” on her MSNBC show upon hearing of a Democratic victory in an obscure Iowa special election. How difficult it must be for Republicans to not have Barack Obama in office or Hillary Clinton on the campaign trail anymore to scare their voters into action.

However, the ad buys and letters do show that the GOP is taking this race seriously after being caught off guard by the senate result last month. That might be enough to get their candidate over the top – sometimes Democrats can surprise in Iowa’s low turnout special elections, but if both party’s bases are engaged, the Republican will probably prevail in areas where they hold large registration advantages.

Still, depending on what message Bossman and the Republicans put out, they may only end up angering and motivating Democratic voters in Sioux City. A big part of the reason Wendt came so close was thanks to a large turnout of teachers and public workers who are still furious over Iowa Republicans’ collective bargaining changes and cuts to public services last legislative session.

Democratic candidate Rita DeJong will have an advantage in turning out that same coalition thanks to her own background as a principal, and the local Woodbury County Democrats have been working overtime on her race since the holidays. She’s also been getting help from activists around the country, with the Postcards to Voters national organization helping send in personalized mail to Sioux City voters.

Whether DeJong is successful on January 16 or not, the race has already been a win for Democrats considering the amount of resources Republicans are spending on a seat that should be a shoe-in. That’s money that won’t be available for key swing districts in Clive or Marion or West Des Moines or Dyersville. The dynamics of a special election are obviously unique, but if Republicans have to expand their map to defend seats where Trump won overwhelmingly, they’ll be stretched much too thin to defend all their incumbents.