Specifically, they’re mad at Iowa Attorney General Tom Miller. It’s been over a week since Miller issued his decision that Kim Reynolds could not appoint her own lt. governor once she takes over after Terry Branstad leaves, but the GOP is still on a warpath against him.

One can understand the frustration – it upended the Branstad/Reynolds transition plans, and Miller had the opposite opinion in December before he thoroughly researched the matter. But that’s just how the law is written, odd as it may be.

This is one of the first times all year that Republicans have been blocked from doing something, a big change for the party that controls all levers of power at the Statehouse. They don’t seem to be taking it well.

Iowa Republicans have launched an all-out assault on Miller’s credibility, decrying him as a partisan hack who made his decision simply because he’s a Democrat who wanted to cause problems for a Republican. Both Branstad and Reynolds put out sharply-worded statements immediately afterward, the state party has sent out many press releases hitting him and party leaders have taken to the TV shows and editorial pages to blast Miller. The Republican operative network has finally been out in full force once again on social media, motivated in a way I haven’t seen since the Bruce Braley campaign. And the state party even filed an open records request for the Attorney General’s office to obtain internal communication on the matter to see how it was decided.

The anger seems to have seeped down to the rank-and-file as well. At the Westside Conservative Club event yesterday morning, a Republican audience member asked if Branstad could fire Miller much in the same way President Donald Trump had just fired FBI Director James Comey.

“We can’t fire the attorney general. He’s openly elected. You can!” Branstad said, as reported by Radio Iowa. “Let’s get a new attorney that will represent Iowa and the people of Iowa’s interests and just follow the law.”

Now a national Republican group is running digital ads against Miller in the state. 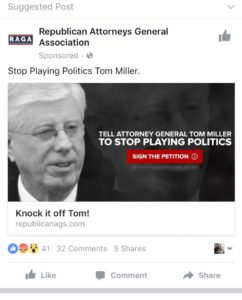 It’s all noteworthy in just how large and coordinated the effort is. It’s also amusing because it’s not going to change a single thing.

As much as Republicans would like to fantasize about capturing every single statewide office in Iowa, Tom Miller isn’t going anywhere anytime soon. First elected in 1978, he’s won reelection by 11 points in both Republican wave years of 2010 and 2014. And voters are not going to remember this kerfuffle, nor care about it come November of 2018.

Democrats in the state have mostly rolled their eyes at Republican charges of Miller being a blatant partisan. While Miller is very well-liked within the party, many still remember the times he’s been on the other side of an issue the party cares about, like his legal defense of former Secretary of State Matt Shultz’s voter fraud crusade. Miller is the furthest thing this state has from a partisan political hack.

And it’s not like Democratic leaders, donors and activists were demanding in public or behind the scenes that Miller kneecap the Branstad transition. Democrats have certainly taken some enjoyment in watching Reynolds deal with the mess, but most agree with the general idea that a governor should be able to appoint their own lt. governor and that the law should be changed in some way to allow it.

The level of fury coming from Republicans seems to be pointing to the likelihood that Reynolds actually will appoint her own lt. governor before the Miller dispute makes it way through the legal system. Her main alternative at this point would be to create a special staff position within the governor’s office, give that job to the person she wants as her lt. governor, and call him or her Reynold’s “governing partner.” The Iowa Supreme Court may yet disagree with Miller’s opinion, and she could move forward with an appointment later on. Defying Miller could create a constitutional crisis, but Reynolds really may be that upset about it.

And hey, it could be worse. As reporter Erin Murphy mischievously mentioned on a recent Iowa politics podcast, imagine if Democrats still controlled the state senate, and Miller’s decision would have meant the next person in the line of succession for governor would be a Democratic senate president (Pam Jochum most recently held that position). Right now it’s Jack Whitver. Miller’s decision is still a major headache for Republicans, but at least it didn’t threaten a change in party control at Terrace Hill. Can you even begin to picture Republicans’ reaction in that situation?