The enthusiasm and energy generated at last week’s newly formed neighborhood group, the Des Moines West Side Democrats, made it feel like the 2018 midterm is right around the corner. It’s unheard of to have this much excitement barely over 100 days into a new Republican administration, especially following an election that swept Democrats from power at all levels. Rather than commiserating and mourning their recent losses, these Democrats are reenergized and already organizing like the midterm election is at hand. Their actions confirm that Trump’s election and the Republican legislative debacle has ignited a powerful organizational firestorm among Democrats that hasn’t been seen in years.

This was the initial kickoff of the latest Polk County neighborhood group. Over the past two years Polk County has been growing the number of new regional organizations. The Des Moines West Side Democrats group brings the total in Polk County to 15.

It wasn’t just the intense enthusiasm that made this meeting so noteworthy. Nearly everything about this new group signals a big change in attitudes among many Iowa Democrats.

More than 80 Democrats packed the backroom of Zimm’s neighborhood bar and grill for the launch. A typical neighbor group’s first meeting would be considered a big success if they turned out a dozen members. The fact that this group only includes six precincts in the county is another indication of the high level of interest.

In addition, this first meeting was led by an unlikely new Democratic organizer. Bill Ekhardt is an ordained Presbyterian Pastor but not actively leading a congregation at this time. He is a stay-at-home dad, which has given him the opportunity to get involved in politics.  He confessed he had no political experience prior to Trump’s election.

“I followed and contributed to President Obama’s campaigns but had never been involved in local politics until now,” Ekhardt said. “I went from a voter to an organizer on November 9th at about 2:00 am when the election was called for Donald Trump.”

Ekhardt has been a leader in the new Indivisible movement. He has been a regular member of the Indivisible members lobbying Congressman Young to vote against Obamacare repeal.

Ekhardt said he worked to get the big turnout for this first West Side Democrats meeting but modestly credits it to being the right moment for this group. That was confirmed by the many elected officials and candidates that attended the first meeting. Both Senator Matt McCoy and Representative Jo Oldson (this group is in their Districts) were on hand to speak. Several candidates or prospective candidates for multiple offices were in attendance as well. Senator Rob Hogg stopped by briefly to wish them well. Des Moines Mayor Frank Cownie attended as well.

There are several other observations about this meeting that should give Democrats hope that the change is real and they are making long lasting commitments to organizing. It’s generally accepted that the Democrats lack of enthusiasm in the 2016 election contributed to their losses. Yet, as Ekhardt asked for volunteers for precinct canvassing, voter registration and fundraising, he had no trouble finding willing participants. It was obvious these Democrats are committed to an early organizing drive much earlier than usual. Ekhardt polled the group as to how many were brand new to political involvement. About 15 hands went in the air.

The Des Moines Westside Democrats is a solidly blue area. Democratic Representative Oldson ran unopposed in 2016. Her last Republican opponent was in 2012 and lost to her 71% vs. 29%.

Democrats understand there are two essential goals they must achieve in order to win in 2018 and beyond. They must decrease their margin of losses in rural areas and increase their margins in blue areas. Establishing an early organizational structure in a blue area like this westside neighborhood is crucial to building those margins. 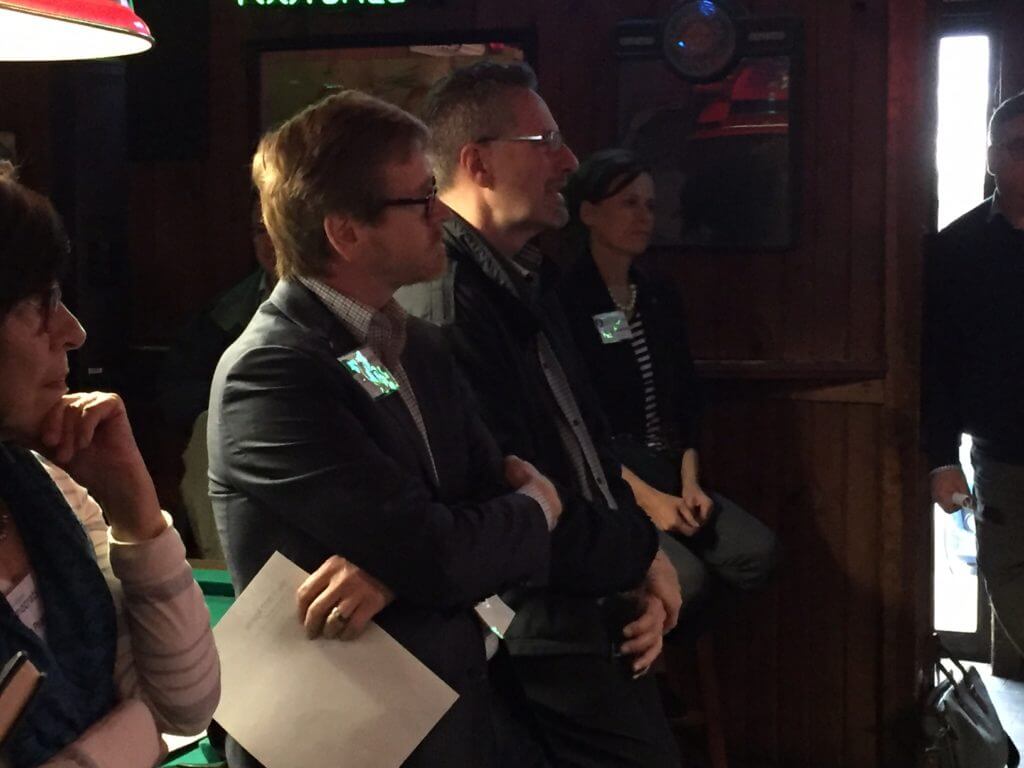 Since the election, Democrats have continually talked about winning back rural voters, but focusing on building turnout in solid Democratic neighborhoods is just as important. It’s much too easy to be complacent in a solidly blue area like this one. Democratic voters need to be reminded their votes are important and can’t take a solidly blue area like this for granted. They must increase the turnout and that requires early and dedicated organizing at the precinct level.  This new group is already beginning to build that structure.

Every indication is that this neighborhood group’s enthusiasm reflects that of Democrats all over the country. The Trump Presidency has converted millions of Democratic voters to Democratic activists.

3 Comments on "Is It May 2018? Neighborhood Dem Groups Rapidly Expand"