Minnesota Senator Amy Klobuchar’s appearance last night at the Polk County Democrats’ Spring Dinner had all the hallmarks of a pre-Iowa Caucus event. She offered up many Iowa anecdotes and connections she has to the lead-off state, laid out a national vision for the party and explained a four-point policy approach in a nearly 40 minute speech.

But even if she wasn’t rumored to have presidential aspirations, and even if this wasn’t Iowa, Klobuchar still gave a helpful addition to the Democratic Party’s continuing conversation on how to rebuild after the 2016 disaster. After a few hits on Donald Trump’s administration, she steered her talk to the future of the party.

Hillary Clinton’s name was barely mentioned, but Klobuchar made enough subtle hints as to where the party’s nominee went wrong. One clear theme was the concern that Democrats only spoke to a narrow slice of the electorate, leaving many rural voters in places like Iowa and Minnesota feeling left out.

“First we have to acknowledge the elephant – or maybe I’ll call it the donkey – in the middle of the room. That’s what happened this fall,” she said. “While there are plenty of reasons that we lost in 2016, there is at least one that we can definitely fix for next time: we can make sure that no one is left behind in where we go, in who we talk to, in what we say and in what we do. We know a little bit about how important that is in the Heartland. Minnesota matters, Georgia matters, Wisconsin matters, West Virginia matters, Nebraska matters, Ohio matters, and yes, Iowa matters.”

Although Minnesota stayed in the blue column in November, their state saw a similar, drastic rightward shift that Iowa and Wisconsin experienced. The biggest movement came in the formerly-Democratic Iron Range of Northern Minnesota, where Klobuchar’s father was once a miner.

Without outright saying it, she addressed how Democrats can seem out of touch on the issues they prioritize to many blue collar voters.

“I think as a Democratic Party we have to make an important statement: not everyone wants to go to a four-year college, and we need to respect that,” Klobuchar urged.

She laid out a series of policy ideas for better technical training and community college affordability. And she focused in on rural outreach several times.

“We know that there are many rural communities where there isn’t a doctor for miles and miles,” she said. “It is time for us to make a big commitment to our rural communities by expanding broadband, supporting our farmers, building affordable housing and taking on rural poverty. That’s how we leave no one behind.”

Most importantly, Klobuchar encouraged Democrats to get out of their comfort zone, and go talk to the voters who abandoned the party in 2016.

“We have to go where it’s uncomfortable, and we have to listen and learn from our friends at work and other people who we don’t maybe always agree with, and we have to do it everywhere in the 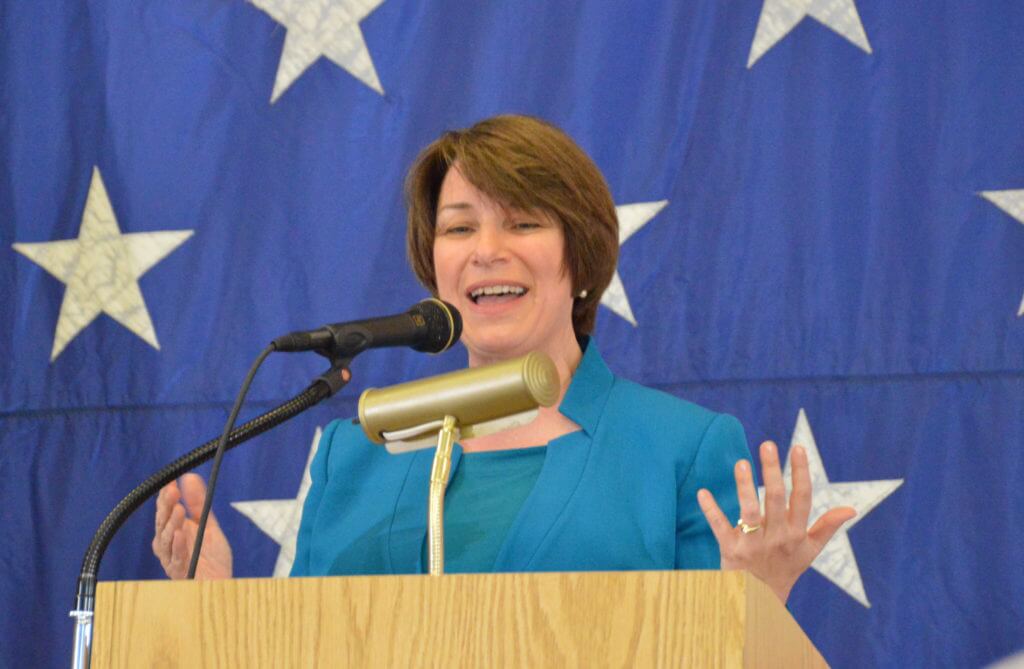 So, does it seem like Amy Klobuchar is going to run for president in 2020? While the year 2020 is far off, those campaigns could get started as early as November 2018, immediately after the midterm election. And Klobuchar has been to Iowa plenty of times before, visiting Northern Iowa several times and traveling the state for the Clinton campaign in 2016.

It certainly seemed like a Iowa Caucus-style speech, though it was focused much more heavily on policy ideas than it was personal and biographical stories that a candidate uses to introduce themselves.

But she did make more than plenty of references to how she knows or is connected to Iowa. So many that I made a full list:

“As I’ve told many of you before, I can see Iowa from my house. It is good to be back with friends.”

“Here in Iowa, you pride yourself in being first. First in corn production. First in hogs. First in caucuses.”

“Both Iowa and Minnesota have a strong tradition of grassroots politics … but we also have a lot of independent voters.”

“I’ve visited Golden Grain energy in Mason City where they’re creating jobs in the Midwest instead of feeding the coffers of oil sheiks in the Mideast.”

“I got to stop by Popcorn Heaven in Waterloo, where innovations have led to popcorn flavors like Dill Pickle and Southwest Hot Wings, which I somehow ate at ten in the morning.”

“I think of it as four corners – kind of like the state of Iowa, square but cool.”

“You know where my [sister] got her GED? In Iowa. She got a job at a plant down here.”

“As your great Iowans Tom Vilsack and Tom Harkin – who Minnesota will always be known, Tom Harkin, as Paul Wellstone’s best friend.”

“Renewable fuels have become a homegrown economic generator for Iowa and Minnesota … POET is in Minnesota and South Dakota, but their plant in Emmetsburg is churning out cellulosic fuel.”

“The Renewable Fuel Standard, a standard I fought to strengthen, has created more than 850,000 jobs in ten years.”

“What about the other bridges, what about the Charles City bridge, that partially collapsed last month in Iowa?”

“We have one of the top voting turnouts, and sometimes you do, but you just kneecapped yourself because of what the Republicans did in the Legislature.”

“You have a number of Somalis here in Iowa as well.”

That’s about as chock-full of Iowa shoutouts as an out-of-state politician’s speech can get, so Klobuchar certainly has that base covered were she to launch a presidential run for 2020.