Statehouse Republicans have mounted several high-profile legislative attacks on their political opponents this session, Planned Parenthood and public sector unions chief among them. However, Republicans are also pursuing their goals through much quieter channels, though no less devastating ones.

In some cases, poisonous measures are nestled within the text of a bill. For example, deep within SF 29 – ostensibly a bill to eliminate Iowa’s Department of Education – there is a paragraph on p. 45 that casually eliminates the institutions of Iowa Public Television and Iowa Public Radio. In other cases, the legislation is decentralized, comprising several bills that go after a single target on multiple fronts – and perhaps the biggest such target this session is Iowa’s public universities.

The University of Iowa, Iowa State University, and the University of Northern Iowa are the crown jewels of Iowa’s public education system. These three regents universities serve as economic engines and intellectual hubs for the state of Iowa, enriching the lives of citizens in countless ways.

Both Iowa and Iowa State are classified as Research 1 institutions, the highest possible ranking for research activity at doctoral institutions, while UNI occupies the highest rank among master’s-granting colleges and universities. Approximately 80,000 students from across the state and around the world attend classes and conduct research on these campuses, supervised and taught by internationally acclaimed faculty. 80 percent of the students are from Iowa, and 92 percent of those want to stay in the state after graduating.

For Republican legislators, however, the benefits provided by the state universities come with one intolerable string attached: the professors. To hear the Republicans tell it, the halls of academe are filled with wild-eyed Marxists hell-bent on indoctrinating your children with liberal propaganda (though not in the classroom, since it’s well known that they don’t actually teach anything), but only when they aren’t enjoying lavish do-nothing sabbaticals at the taxpayers expense. And of course, they have jobs for life, because these tenured professors can’t be fired.

Speaking as a professor myself – although I do not teach at one of the regents universities – I must wistfully note that we do not wield anything like the sort of power that the Republicans imagine we have. (Believe me, if I were capable of indoctrinating my students, they wouldn’t ask me questions that could be answered by reading the course syllabus.) But what they fear is our dedication to critical thinking, our insistence that arguments and opinions be based in fact, and our dedication to the pursuit of intellectual truth over ideological purity – values that we do attempt to instill in our students, so that they can go on to become informed and engaged citizens.

Moreover, while there are a few professors at the highest levels who have relatively light teaching loads – perhaps small, highly specialized seminars for graduate students, coupled with one-on-one dissertation or thesis advisement for master’s and doctoral candidates – their other responsibilities (what we refer to as “load”) will be weighted more heavily toward either research or service. This type of rarified opportunity, however, generally only comes several years after being granted tenure.

I’d like to take a moment to explain just what tenure is, because it’s widely misunderstood. Many people assume that it means professors get a job for life – that is, once you’re hired, you can’t be fired. In reality, tenure (as defined by the American Association of University Professors) is “an indefinite appointment that can be terminated only for cause or under extraordinary circumstances such as financial exigency and program discontinuation.”

It also takes a lot of time to earn tenure – usually five to seven years – and considerable effort, requiring a significant variety and amount of measurable contributions to research, teaching and service, all of which are assessed by the faculty member’s department and college at regular intervals, as well as by external reviewers at other institutions in the year or so prior to going up for tenure. It is difficult and stressful: as of the 2015–16 academic year, only 44.8% of professors at the regents institutions were tenured, with another 14.6% on the tenure track.

The practical effect of tenure is that it keeps you from being fired for doing research in areas or on subjects that people might object to. This could be for a variety of reasons: it challenges powerful political or commercial interests, attempts to address controversial issues, or may just seem irrelevant to people unfamiliar with the discipline. Consider the agronomist who studies the effects of fertilizer runoff on water quality, or the sociologist researching links between the access women of color have to birth control and their potential for socioeconomic mobility, or the economist teaching a class on supply-side economics, or the public health specialist looking into statistics relating to gun control laws, or the biologist running experiments that use embryonic stem cells, or the historian writing a biography on Ayn Rand, or the musician leading a performance seminar on music from Iran.

Chances are that you could find people who would object to aspects of any of these examples – indeed, some might argue that they shouldn’t be taught or studied at all. But tenure enables professors to continue pursuing such work without fear of retribution or termination. The fact that such topics are controversial, unpopular, or contradict the desires of the politically connected or powerful makes no difference: professors cannot be fired without cause.

As the recent debate over collective bargaining has shown, this protection is one that Iowa’s Republican legislators do not like. Having moved to strip it from public employees in general, there is another bill – SF 41, sponsored by Senator Brad Zaun (R–Urbandale) – that would prohibit “the establishment or continuation of a tenure system for any employee” at the three regents universities and for any community college in the state.

“My thoughts are obviously to end tenure,” Zaun told the Register on Wednesday. “I think the university should have the flexibility to hire and fire professors and then I don’t think that bad professors should have a lifetime position guaranteed at colleges. It is as simple as that.”

As with so many pieces of legislation filed this session, this bill is a solution in search of a problem. “Bad professors” do not have guaranteed employment. The University of Iowa, for instance, has regular post-tenure reviews that monitor the academic productivity of tenured professors. If these regular reviews indicate that they are not doing their job in line with their contractual obligations, then they can indeed be removed from their position – but again, that would be for cause.

Senator Zaun’s bill does not address any problem that cannot already be solved. What it would do is ensure that Iowa would be unable to attract the brightest, most creative, and most innovative academics to the state, as none of them would want to work someplace where their academic freedom would be so grossly infringed. It would relegate Iowa to the level of a third-world nation, academically speaking, and would cause an exodus of students and federal grant money from the state almost overnight.

This proposal, however, is not the only one filed this session intended to bring Iowa’s public universities to heel. SF 288, filed by Senator Mark Chelgren (R–Ottumwa), would require “partisan balance” among the faculty at public universities, imposing a hiring freeze until achieved. Take a look: 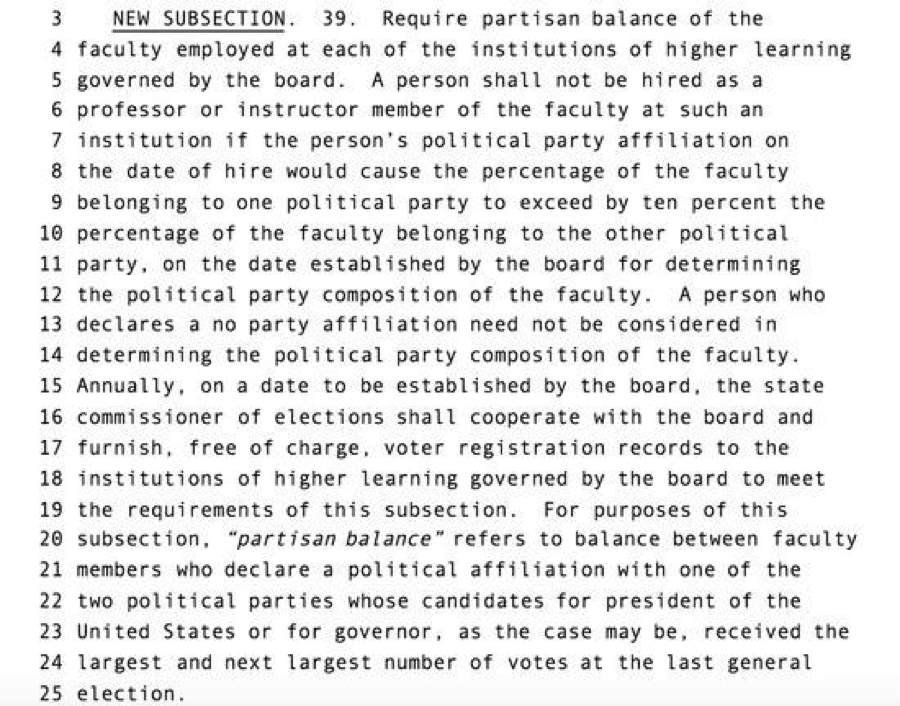 Setting aside the fact that this is nakedly and embarrassingly unconstitutional on its face, the bill as written has loopholes big enough to comfortably allow a battleship to pass through, and is entirely unenforceable.

More overtly threatening is SF 256, sponsored by Senator Jake Chapman (R-Adel), which reminds us that Republicans support local control until it interferes with their ideological hobby horses – in this case, unrestricted access to weapons. This bill, in part, would revoke individual universities’ right to restrict the possession and use of firearms and other deadly weapons on campus.

Instead, the bill states that public universities and community colleges “shall not adopt or enforce any policy or rule that prohibits the carrying, transportation, or possession of any dangerous weapon…[which] include but are not limited to any offensive weapon, pistol, revolver, or other firearm, dagger, razor, stiletto, switchblade knife, knife having a blade exceeding five inches in length, or any portable device or weapon directing an electric current, impulse, wave or beam that produces a high-voltage pulse designed to immobilize a person.”

Which is not at all insane, given that 18 to 22 year olds are renowned for their emotional stability and responsible use of alcohol, and that campus residence halls and fraternity houses are well equipped with appropriately safe and well-supervised firearms storage facilities.

On a more serious note, the legislature’s actions have real financial repercussions on faculty and students alike. On February 22, the University of Iowa was forced to reduce scholarships for over 3000 students because of $8,000,000 in cuts imposed by the legislature halfway through the institution’s fiscal year. Moreover, the sweeping changes to the state’s collective bargaining law has forced the Board of Regents to restart contract negotiations with unions for faculty, staff, and students at all three public universities, which will almost certainly result in benefit cuts. These will make the universities less competitive on a national level, making it harder to attract the best faculty and students.

I am well aware that university professors and students aren’t necessarily the most sympathetic figures I could focus on in terms of who’s getting hurt by Republican policies in the state. But they are some of the most crucial in terms of helping secure Iowa’s future. The economic, educational, creative, and intellectual contributions that the regents universities make are literally beyond price. They enrich our lives, inspire our children, grow our economy, and make Iowa a better place to live – and not just for those who live in Ames or Cedar Falls or Iowa City, but for those in Denison, and Burlington, and Mason City, and Dubuque, and all around our state.

As many others have noted, the educational reputation of this state is one that Iowans take seriously, so much so that the quarter issued to represent us in 2004 bore the motto “Foundation in Education.” The time has come to hold our Republican legislators to account for such a lofty goal, and to expel them if they fail to uphold it.