I’ve watched as Donald Trump buzzed his helicopter directly over Hillary Clinton at the Iowa State Fair, then come back for a second pass. I’ve attended a Ben Carson event that turned a downtown bridge into a lavishly expensive family fun concert complete with Disney princesses and a gigantic American flag. I’ve seen protesters rush stages, candidates fall off of them and voters get in fist fights in the crowd.

I’ve seen a lot of weird things in Iowa politics. And then I saw Ron Corbett’s final “State of the City” speech yesterday.

The two-term Cedar Rapids mayor and former Speaker of the Iowa House has been rumored for months to be contemplating a run for governor, challenging Governor-to-be Kim Reynolds in a Republican primary. Corbett all but confirmed that chatter last month, and promised a “big surprise” at his speech. Considering how he hyped it in the same interview discussing his gubernatorial aspirations, many predicted (including the woman who introduced him yesterday) that he’d make some sort of announcement of a campaign there. Indeed, his think tank, Engage Iowa, has been running online ads promoting Corbett of late.

So I headed out to Cedar Rapids to the DoubleTree convention center ballroom to see if he’d make news. Almost immediately there were signs for concern.

The "end" of Cedar Rapids' Mayor Ron Corbett's Condition of the City address. Seems like there's something missing… pic.twitter.com/QzGjwM8mKW

The “big surprise” was being played up to bizarre proportions, in a way so hokey that you wouldn’t think this is how a serious politician was going to launch his campaign for governor. And sure enough, it was not.

When Corbett got to the end up his speech, in front of a room packed with nearly 1,000 citizens eagerly awaiting his news, he announced his surprise… a musical tribute to the people of Cedar Rapids. Calling his band, Crankshaft, up on stage, he then belted out a spirited, bluesy “Sweet Home Cedar Rapids,” slightly modifying the lyrics to the Blues Brothers/Robert Johnson song.

This may be the single weirdest thing I've ever seen in Iowa politics & that's saying something pic.twitter.com/TBK75ovKEg

And that’s how the Republican who may yet challenge Reynolds in a high-profile Republican contest finished his event.

Ah, but first, let’s talk about his speech.

Before the musical performance, Corbett regaled the crowd with a nearly hour-long monologue about all the various lessons he – and Cedar Rapids – has learned during his seven years in office. Four lessons, to be precise: Get things done, be open for business, don’t throw in the towel, and the importance of community pride.

In a delivery style that seemed like a dry church sermon with the occasional parable about stonecutters, Corbett drilled through each lesson in considerable depth, relating it to various stories from what the city has experienced. When he spent about seven minutes on the importance of to-do lists in his first section, it was clear the audience was in for a long day.

There were a few moments where it seemed like Corbett was laying out early talking points for a gubernatorial run, but they ended up to be few and fleeting.

“On a daily basis, drama isn’t played out in the Cedar Rapids paper like we see now in Washington, D.C., and we see that now at the state Legislature. But we don’t see it here locally, and the council never got into pettiness,” Corbett said, setting up a contrast to his governing style to that of the now highly-partisan Legislature. 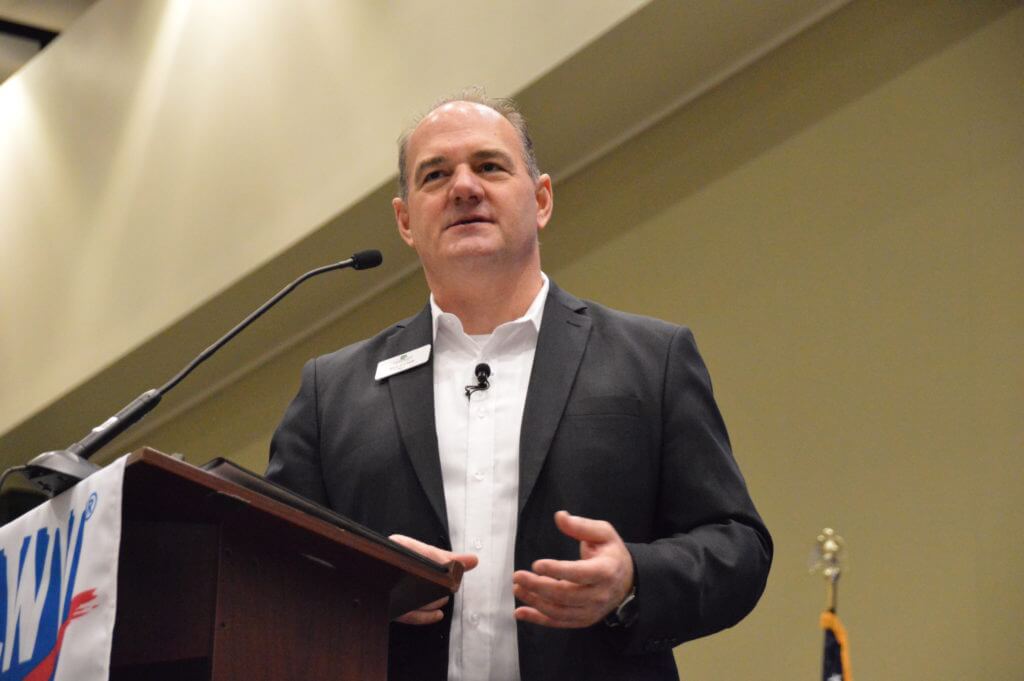 He hinted that he and City Manager Jeff Pomeranz would work together again, possibly indicating that he’d bring his friend and partner in governing to Terrace Hill. And he did get in a line that could be used as a line of attack on the Branstad-Reynolds administration in a looming campaign.

“Being open for business does not mean you open the city checkbook and give business everything they want,” Corbett cautioned, explaining the partnerships the city built with business in Cedar Rapids.

But for the most part it was a long and winding speech through the recent history of the city, from the floods to business deals to park improvements. It may have been interesting to a few of the people in the room, but it was nowhere near a compelling message that could excite primary-going Republicans.

Pieces of a useful narrative were certainly there – Corbett portrayed himself as an effective administrator, a unifier and a promoter of a community spirit. It just was packed in an overly-long, dry speech with too much technocrat speak.

Corbett actually got passionate and compelling right at the end, calling Cedar Rapids a cathedral that the community had built and protected during trying times, and promised that their future will always be bright. And he did bring up his own personal faith in a touching moment, recalling how he prayed to God during the early rains of the 2016 flood.

And then there was the song.

Perhaps Corbett has a better trick up his sleeve in the near future, because the early stages of this gubernatorial bid seem to be more self-indulgent than a serious operation that can win statewide. Were I a Kim Reynolds’ political adviser, I would not have been worried from what I saw yesterday.

But hey, the guy can sing.