The first early signs of an electoral backlash against Republicans’ plans for 2017 started to show in Iowa and elsewhere today at rallies in support of the Affordable Care Act. Iowans worried about the future of their and their family’s healthcare and lives turned out in 30-degree weather and looming freezing rain in Des Moines, Cedar Rapids, Council Bluffs and Sioux City to urge Republican members of Congress to keep the ACA intact.

The events had been organized in part by the Democratic Party, with Senators Chuck Schumer and Bernie Sanders taking the lead on it nationally. About 200 showed up outside the federal building in downtown Des Moines, where many attendees shared their stories of how the ACA had helped them.

“I just signed up for my second year of the ACA,” said Matt Tapscott, 59, of Decorah. “I own a business, I’m a veteran, I’m kind of the people the Republicans say, ‘We’re all about that.’ But ‘accessible healthcare’ is meaningless if you can’t afford it.”

Tapscott pays $340/month for his current health insurance plan, getting about $600/month in ACA credits to make it affordable. For many years prior to the ACA’s implementation, he simply went without coverage.

Healthcare rally today in CR. We need to make sure Iowa's most vulnerable have the care they need. @IowaSenate @iowahospital @RepRodBlum pic.twitter.com/YwuYmFQSEU

Oakley Cadogan, 40, came down from Ames to share her experience with the program. She was diagnosed 10 years ago with a disease that caused kidney stones to form often. At that point she was underinsured, but had to undergo a surgery regardless. It cost her $10,700. When she needed a follow-up surgery a few years ago, she was covered by a plan on the ACA exchange. That surgery cost her $300.

“I did my best to do everything I could to be healthy, but I couldn’t afford medications. I couldn’t afford to go see the doctor,” Cadogan explained. “I ended up needing a surgery again. Luckily, right at that time the Affordable Care Act went through. I was able to get health insurance through the exchange. Since then I’ve had a lot of success. Being able to stay on my meds, pay for my meds. But if preexisting conditions go out the door, I’m going to be in trouble. It’s a scary thing.” 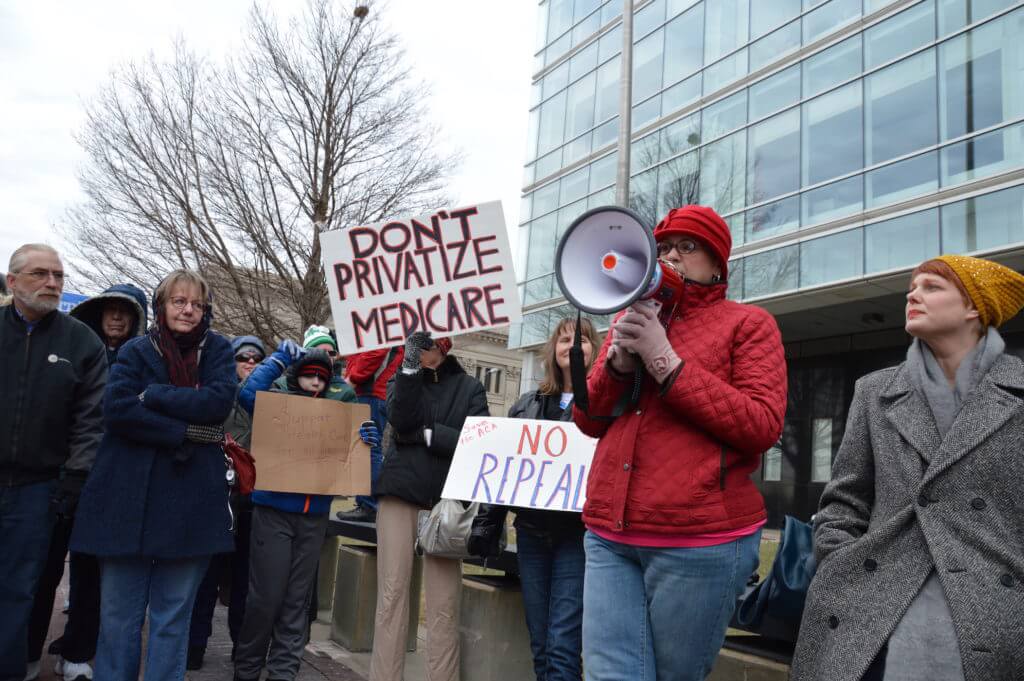 But it wasn’t just the affordable rates or coverage that the ACA plans that benefited people like Oakley. She also took advantage of the preventative screenings she got through the expanded Medicaid coverage. That helped her afford a sleep study to diagnose her severe sleep apnea, as well as get help to treat it. And her doctor diagnosed her pre-diabetes condition, which helped Oakley address it early.

“If I hadn’t been getting my regular screenings, my check-ups, there’s no way I would have caught it so early,” she noted.

Organizers at each event encouraged attendees to contact Senators Chuck Grassley, Joni Ernst and Congressmen David Young, Rod Blum and Steve King. Iowa’s one Democratic Congressman, Dave Loebsack, held a roundtable on the benefits of the ACA in Iowa City on Saturday.

Big turnout to hear about why affordable health care is important to all Iowans! #OurFirstStand pic.twitter.com/AXdoREgUdK

Many rally-goers expressed their determination to make their voice heard, and some noted the incident of the Colorado congressman who left his forum after a massive turnout of people concerned about the ACA.

“I’m a childcare provider. I make $40,000 a year before taxes. Insurance executives make in one hour what I make in one year,” said Tapscott. “I can never afford to buy the product they’re selling on what I earn … To hear some Republican Congressman saying he’s heard hundreds of bad stories [about the ACA], I thought I need to come tell my story and hopefully people around the country will tell their story.” 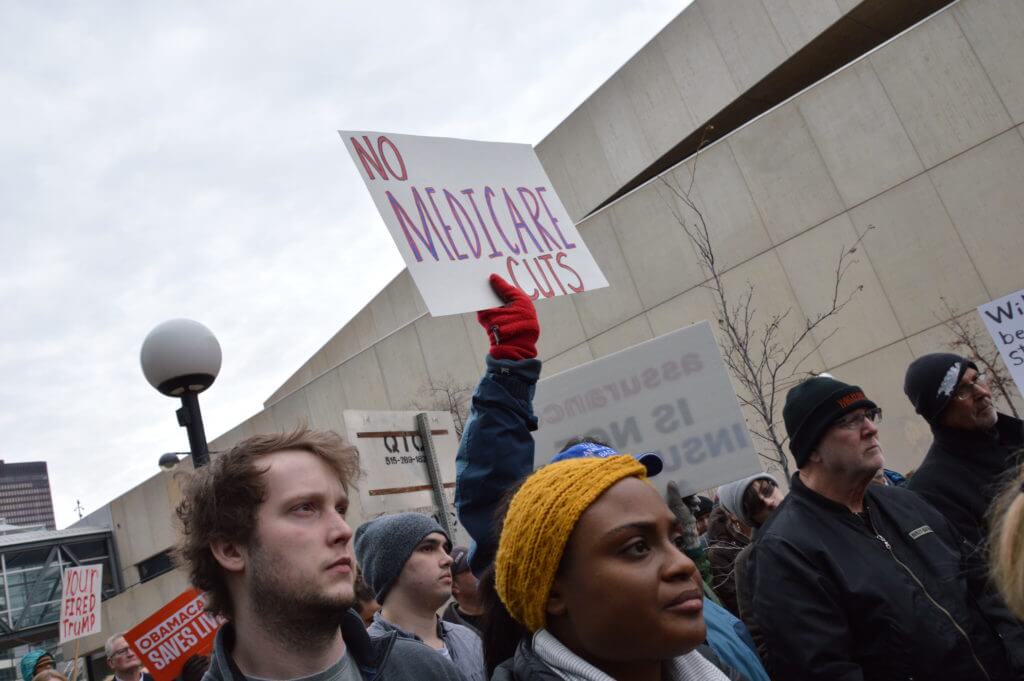 But while many were there to share their positive stories of the ACA, others were extremely worried about what would happen to them after a repeal. As Mike Tramotina explained at an ACA press conference last week, the people he helped the most to get coverage were Iowa women who husbands passed away or lost their family healthcare.

“In May, my husband came home looking yellow. We found out he had pancreatic cancer,” said a woman named Jolene, who took the bullhorn to address the crowd. “Now we found out the other day, [his chemotherapy] is not working at all, and he has three to six months to live. I am on his insurance, and so is our 23-year-old daughter. What is going to happen to us? Under the ACA, I would be able to go in and get insurance … They say they’re going to repeal, but they’re also going to replace? We know that’s crap.”

Organizers encouraged ACA supporters to inundate Iowa Republicans’ phone lines over the next few weeks, and distributed the contact info: 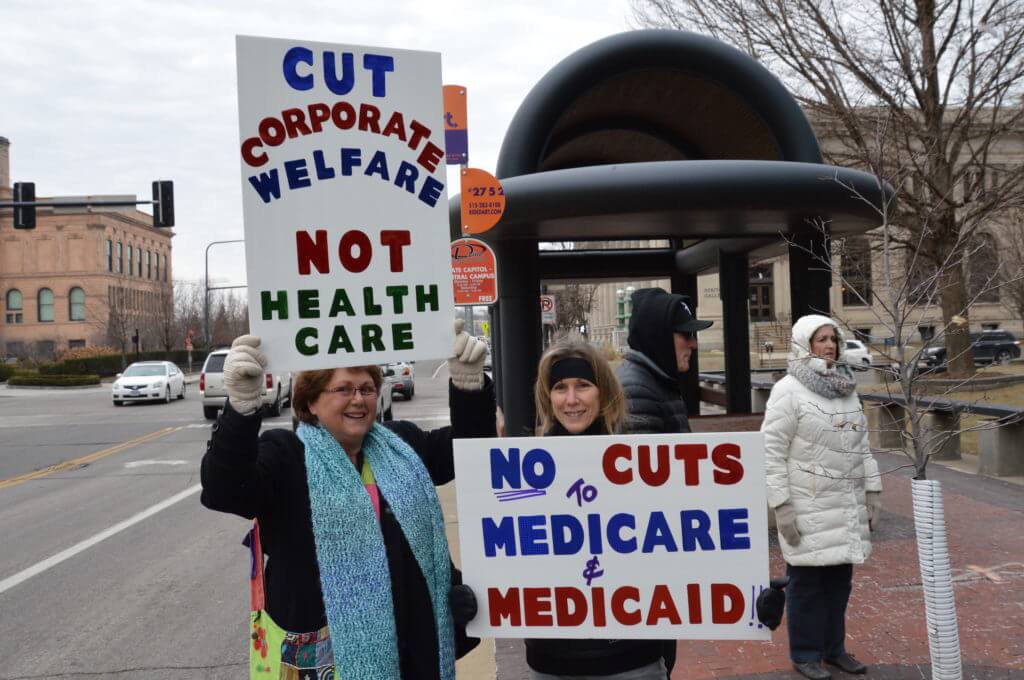