NextGen Climate, the national climate change group, announced this week their new secret weapon to turn out millennial voters: their staff and volunteers will be bringing their pooches to events. They noticed, apparently quite by accident, that when their volunteers brought their puppies with them to events, the group had greater success at getting students to register and commit to vote.

NextGen Climate is driving a massive get-out-the-vote effort on college campuses. They have increased their presence on nearly 300 campuses in swing states in the final days of this campaign. Their target is millennial voters, especially college students. Tom Steyer, the retired California billionaire investor funding NextGen Climate, is known for testing unconventional methods to get-out-the-vote. The “doggy day” promotion is their latest unique attempt to reach younger voters.

The Iowa chapter of NextGen Climate reports they are active on 23 campuses from Dubuque to Sioux City. Early voting on Iowa campuses is strong and their supporters are enthusiastic. While advocating about climate change is central to this group’s efforts, they point to a menu of issues that are driving students to the polls. 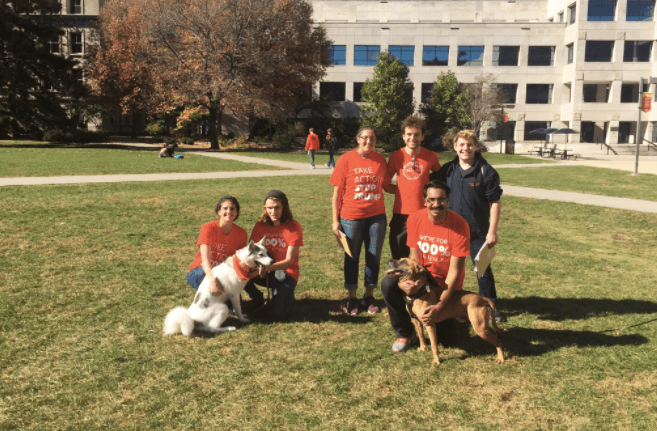 No one has explained the reasons behind the seeming puppy magnetism for millennials. One can only speculate. Why do politicians always grab any available baby for a photo op? Probably because every politician knows any baby will be more popular than they are, and they hope voters will see them as human by embracing a baby. If this hound promotion is effective, just wait for 2018. Every politician will be calling out the dogs to fetch voters to their campaign.

Every promotion needs an enticement to motivate action. Why not offer a puppy interaction. Who doesn’t like puppies? Who would turn down a chance to see or pet some lovable little mutts? Puppies are non-threatening (at least most puppies) and unleash the barrier to conversation. Having worked registration tables on college campuses, it’s often difficult to engage students in conversation. If it takes going to the dogs to get their attention, so be it.

Some may think NextGen may be barking up the wrong tree with their novel approach. You can be critical but in this toxic election season, a transparent appeal at puppy love can’t be all bad. We should all be rejecting the negative advertising used by our opponents to diminish voting. Embracing man’s best friend may prove to be a much healthier motivator to encourage voting than screaming negative insults at opponents. Could a puppy intervention be just the tonic to soften the rhetoric?

Every political campaign watches what the competition is doing. If they see an opponent’s promotion doing something that threatens their campaign, they usually react and criticize. Based on that observation, Brietbart News has picked up on NextGens puppy promotion and are howling about it.

“Anyone stupid enough to choose the next president of the USA based on … looking into the adorable eyes of a juvenile dog is 99.99% likely to be a natural Hillary voter,” they wrote.

Brietbart is likely mad because millennials are turning their back on their defective candidate, Donald Trump. They would love to muzzle all the positive messages about Hillary.

NextGen founder Tom Steyer has focused much of his organization’s efforts this year on reaching those millennial voters, highlighting climate change messages with them.

“You’re looking at the largest age cohort in the United States right now — bigger than the baby boomers — that is passionate about energy and climate, and doesn’t participate at levels that are commensurate with its numbers,” Steyer has said. “It makes total sense to try and talk to them on the issues, get them involved, try and get them to understand the true significance of their vote, and encourage higher participation.”

Nick Ellis, the group’s “National Puppy Coordinator” explained, “We want every young voter to make it to the polls by election day, so we’ve enlisted our most loyal companions to help during this historic election, we are excited about this new approach to voter outreach.” 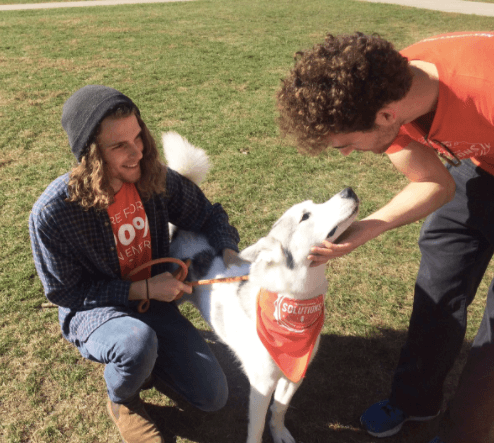 Ellis is in an ad for the campaign along with his lovable puppy, Petey. They’re bringing puppies to events in Iowa, North Carolina, Pennsylvania, Nevada and New Hampshire this week. In addition, they will be using a digital campaign to recruit more puppy volunteers.

Democrats desperately need millennials to vote. NextGen Climate is filling a critical role in motivating them to vote and elevating climate change as a priority in this election. Hopefully, NextGen Climate will be successful in bringing millennials to the polls to vote for Hillary. Because dog-gon-it, Americans and their puppies will be better off with President Hillary Clinton.

2 Comments on "A Secret Weapon For GOTV: Puppies?"