When politicians spend money to run negative ads that lack substance and the entire truth, they usually do so out of fear of their opponent. So, one can conclude that Iowa House Majority Leader Chris Hagenow is running scared, much as he should be because the four-term Republican legislator has a formidable foe in Democratic challenger for Iowa House District 43, Jennifer Konfrst.

It speaks to the character of Representative Hagenow that, rather than discuss the challenges of legislating solutions to Iowa’s most pressing issues, the Hagenow campaign has decided to try and lob some mud pies against his opponent, all over a very basic, and long-rendered moot, point. To top it off, when given the opportunity to clarify his campaign’s ad on The Insiders, he was a no-show; good strategically from a political standpoint, but markedly lacking the moral integrity to either retract his spurious claims or the fortitude to stand behind them.

However, his negative attack actually presents a good opportunity for Konfrst to continue to discuss a good talking point: how the costs of childcare and lack of paid family leave affects working families and what she can do in the Iowa legislature to help.

As a mother of two and a university professor, Jennifer Konfrst knows her first priority is to ensure her kids’ and every child’s future is secure. Part of that is advocating for high quality education in Iowa’s schools. This means Iowa legislators must make room for allowable growth when deciding how much education funding to dole out every year, something that has not occurred in recent appropriation battles and has already begun to affect students. Iowa ranks 24th in the nation for K-12 education and the current trend seems to outline a slow decline if something isn’t done. 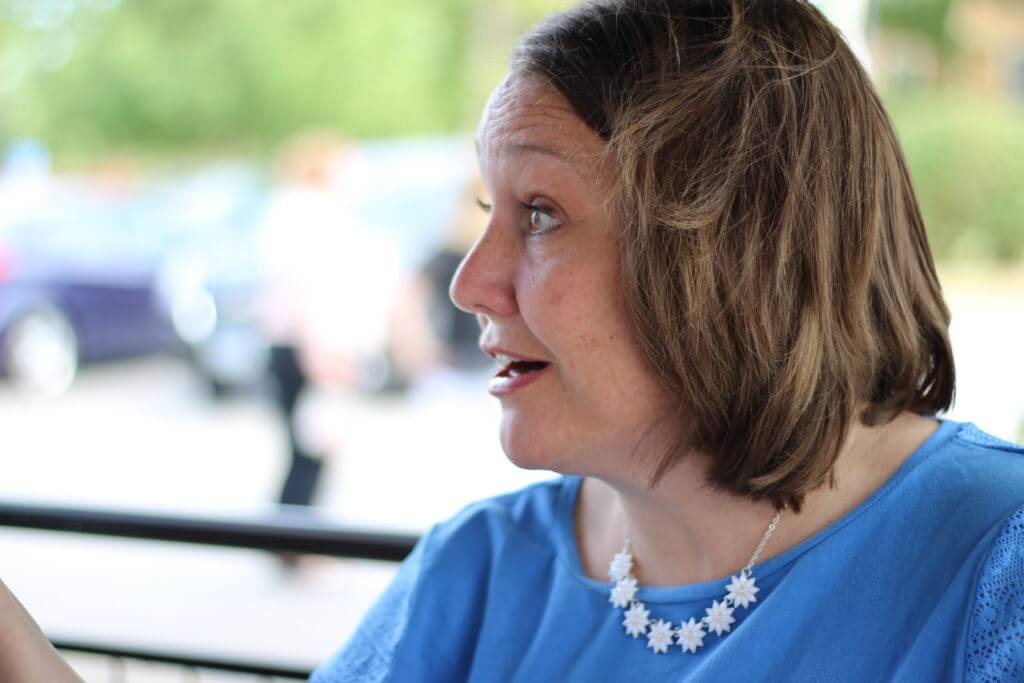 A number of battles for education funding were waged in the Iowa Legislature the previous year led by Senate and House Democrats to no avail. Democrats and local community leaders fought for an increase for 6%, 4%, then 2.45%, and then 2%, while Republicans refused to budge for more than a 1.25% increase to K-12 education. A compromise of a one-time cash infusion of $55.7 million with a 1.25% overall budgetary increase was finally reached by Republican and Democratic legislators, but ultimately Governor Branstad line-item vetoed the one-time increase, seemingly angering legislators on both sides of the aisle. The result is that even less was allotted for this past year than anyone anticipated — certainly not enough to help over 70 struggling public school districts. And at least $1 million dollars of the vetoed funds were slated for House District 43.

As House Majority Leader, Representative Chris Hagenow had a substantial role in this poor outcome. Hagenow and his Republican peers claim to want to protect Iowa’s quality of education, but have consistently failed to meet the changing landscape of Iowa’s schools, having allotted an average of less than 2% in increased funding over the last eight years, giving way to the lowest allowable growth rate in school budgeting in decades. They have said that school districts are receiving too much money and that public spending in this area is wasteful, yet all of the available data indicates otherwise. Hagenow and his colleagues have repeatedly prevented education funding from going to public schools and instead advocate for privatization and tax cuts to businesses. The truth is, if Republican leaders considered public education as a priority, they would find a way to make the budget work rather than spouting meaningless platitudes and allowing the governor to destroy months of bipartisan policymaking.

Jennifer Konfrst is sick of it.

“This is why I’m running. We can’t afford to go down this path any longer. We have to do it right,” she says.

And Konfrst’s credentials in this area are not lacking. Before running, Konfrst became familiar with the school system as a past board member and past-president of her local Parent Teachers’ Association and is currently a professor at Drake University. Konfrst knows what universal challenges parents, instructors, and students face from an administrative level, but also a personal level as a proud mom of two, Ellie (16) and James (14). Ellie has even begun following in her mother’s footsteps taking a prominent leadership role in the High School Democrats of Iowa as chair.

Outside of running for office, Konfrst also manages a small business. Konfrst’s candidacy in House District 43 is refreshingly simple in that it is based on values that benefit all Iowans: fully funding schools, improving mental health services, paid family and sick leave, ensuring equal pay for women, freezing college tuition, and promoting skills training so Iowa can grow its small business economy.

These are topics worth discussing and one a four-term legislator should have little to no issue addressing. Instead, Hagenow has not only chosen to spread distasteful misinformation, but he doesn’t even have a platform for this election cycle to let his constituents know where he stands. His record as House Majority Leader speaks for itself, though. If Iowa’s schools are to be represented by someone who cares, it is time for new representation for House District 43. In less than three weeks, those of you who live in Windsor Heights, Clive, and West Des Moines will have a great opportunity to elect Jennifer Konfrst into the Iowa House.

1 Comment on "Year Of The Woman Candidate Profile: Jennifer Konfrst"