At times during Jill Stein’s Des Moines rally yesterday, you could have closed your eyes and imagined you were right back at a Bernie Sanders caucus event. All the old hallmarks were there: income inequality, marijuana laws and oil pipelines were the big themes of the day, old Sanders t-shirts adorned many in the crowd and the attendees were the same mix of young and old progressives, many with colorful hair, that flocked to the Vermont Senator’s campaign. But giving the speech at the end of the rally this time was Stein, the Green Party’s presidential nominee, the new voice of the disillusioned and disappointed far-left progressive activists.

A little over 150 gathered at the steps of the Iowa Capitol on a sunny and pleasant Sunday afternoon, many of which brought re-purposed Sanders signs. Practically everyone present was a former Sanders supporter, leading one to wonder whether the Green Party would have gained any traction this year had Sanders prevailed as the Democratic Party’s nominee.

“After the Democratic convention and Bernie endorsed Hillary, the two major party nominees do not represent me,” explained Jessica Butler of Sioux County, a former national delegate for Sanders. “So the closest person to me who will get my vote is Jill Stein. She essentially has the same platform as Bernie Sanders.”

“Jill Stein’s the only progressive candidate left in the race,” said Fred Trujilo, a constant presence on the Iowa trail with Sanders during the caucus as his bodyman. “I support the vast majority of the Democratic candidates, just not Hillary.”

Trujilo would have preferred the primary ended differently, but his concern with the Clintons goes back to their days in Arkansas (where he also lived during Bill Clinton’s time as governor) and particularly to NAFTA. A past union president himself, Trujilo called the trade deal “the single-worst labor legislation in the history of the United States.”

Others expressed their doubts over Clinton’s honesty and ties to Wall Street and big corporations. But one steadfast belief that unified the entire crowd was that Clinton and the DNC stole the primary from Sanders. Nearly everyone Starting Line spoke to, as well as most of the speakers, insisted that Sanders actually should have received more votes than Clinton (who won with about a 3.6 million vote margin).

“There was the proof that the exit polling was off, that Sanders really did get more votes without any of the cheating,” said Courtney Claire of Cedar Rapids, who hadn’t voted or caucused before Sanders’ candidacy.

“The Wikileaks came out days before the convention and it was proof that the Clinton Foundation, the Clinton campaign and the DNC was working together, colluding against Bernie Sanders,” agreed Butler. “I believe that if they weren’t to have lied and stolen and purged so many votes that Bernie would actually be the nominee.”

Others thought that Sanders was cheated at the DNC convention as well, including Michael Florhaug of Lakewood, Minnesota, a 40-year Democrat who left the party this year.

“From what I understand and read, Bernie won the roll call at breakfast, so they decided to change the rules and add delegates in at the next roll call,” Florhaug said, though such an incident appears to be more rumor from a handful of delegates at the time, and wasn’t confirmed by any credible news source.

And Florhaug himself was cognizant of the potential misinformation out there.

“I don’t know. I just read that, maybe it’s false, maybe some delegates didn’t make it to breakfast. Everything you hear, everything you read, it’s really hard to believe,” he said. “I have been reading mainly a lot of progressive websites, which of course are going to favor Jill Stein and Bernie Sanders. I also have Occupy Democrats and all the other websites.” 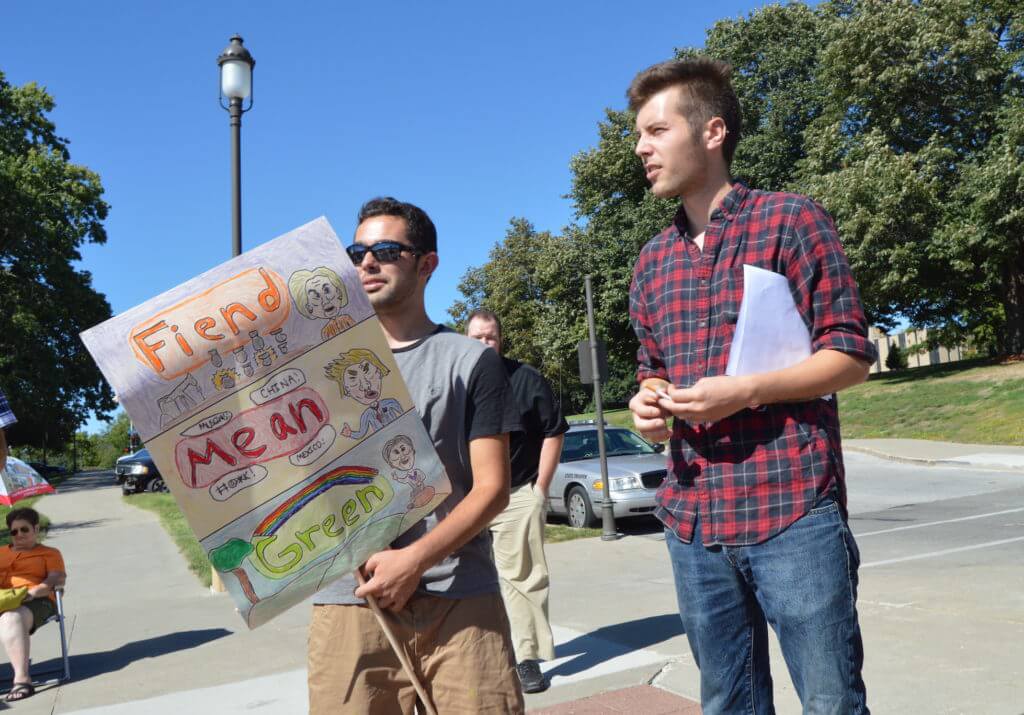 Democratic strategists have been concerned this year about how all this lingering frustration could eat away at Clinton’s vote totals. Moreso, they worry about what it means for the future of the Democratic Party – will any of these frustrated progressives be moved to support Democrats in the future? Many of those at Stein’s events weren’t Democrats to begin with, but many of the younger ones could easily have become a new generation of Democratic voters in the same way Obama won them over in 2008.

“They’d have to completely transform the party from literally the inside, out,” said Claire. “The reason I think it got this way is we allowed money in politics. So getting rid of Citizens United would be a good first step. But I think it’s totally corrupt all through it right now.”

“Until their words follow their actions, I can never see myself identifying with the Democratic Party again,” said Butler, who doubted the progressive additions to the party’s platform would be acted upon. “So no, there’s nothing they can do.”

Those feelings permeated most of the speakers’ remarks, and there were a lot of speakers. Well over a dozen activists, issue group leaders, former Iowa Green Party candidates, musical guests and even a stand-up comic drew applause from the crowd during the 2 1/2 hour-long program. An interesting addition was a write-in candidate opposing Debbie Wasserman-Schultz in her Florida house district, deciding to campaign in Iowa. She yelled rather enthusiastically for most of her speech and at one point disconnected the microphone from the speaker after some enthusiastic hand gestures.

Most speeches were half-policy, half-criticisms of Clinton and Trump, though Clinton received much more invective and boos from the speakers and audience than Trump. There was also a notable amount of profanity – not to mention several obscene Monica Lewinsky jokes – for a political rally, one that included many young children in the crowd. But most stuck to key progressive issues.

“We must protect our land and our water from big oil companies!” exclaimed Daniel Clark, a 25-year-old Sanders delegate from Mt. Pleasant, who said he was a Clinton-backing Democrat before learning more about her. “We need to stop endless wars! We need to get big money out of politics! And, last but not least, we need to raise the minimum wage to a living wage of $15/hour!” 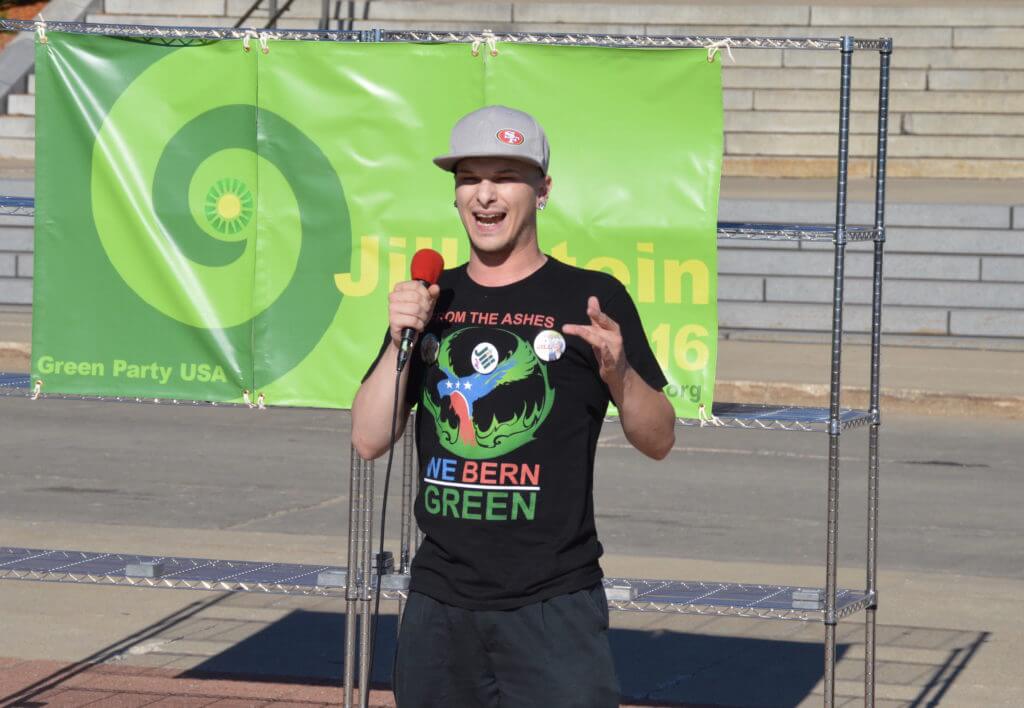 Finally, Stein, who actually arrived relatively early and sat to watch the full event, began her remarks. In the news last week for being charged for vandalism of a pipeline section in North Dakota, she recounted a Native American prophecy she was told recently and how it related to the current struggle against the Bakken and Keystone pipelines.

“We are facing down a crisis of human rights, a crisis of our water supply,” Stein said. “We are standing up to stop a crisis of our climate. We cannot afford not one more pipeline. It is the time to be dismantling our pipelines … We need to begin to phase out fossil fuels so we have zero fossil fuels by 2030. A Green New Deal is how we fix it.”

Part of that solution was through industrial hemp. She related other cannabis topics to issues like immigration.

“To fix the crisis of immigration, the most important thing we can do is to stop causing it in the first place. We say to Donald Trump, we don’t need no friggin wall, we just need to stop invading other countries. And to stop NAFTA, and to stop the war on drugs,” Stein said.

For an event held on September 11th, there was no mention of the terrorist attacks 15 years ago, but Stein did lay large parts of the blame for the creation of ISIS and Al Qaeda at the feet of the United States’ foreign policy.

She and many attendees were also very aware of the arguments made against people voting Green Party this year and looked to counter them. 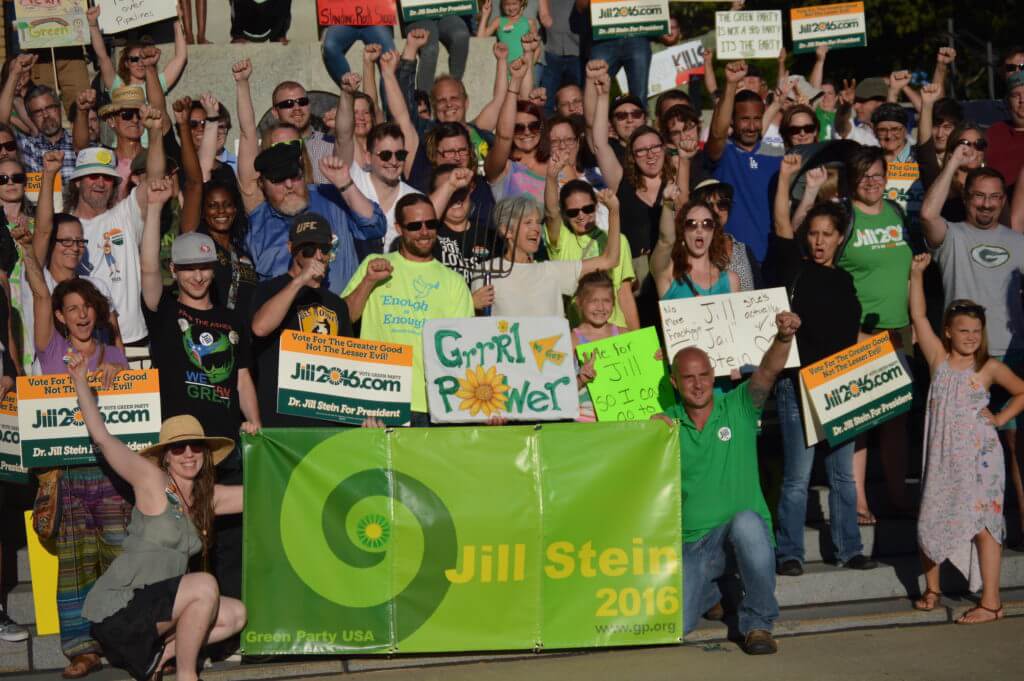 Stein finished up the event by taking a large group picture in front of the Capitol with her supporters. Afterward she met briefly with the press, and Starting Line asked if she had any advice for her supporters on how to vote down-ballot, since Stein is the only Green Party candidate on the ballot anywhere in Iowa.

“Where there’s green, vote green, where there’s not, vote for the most progressive you see without regard for the party label,” she replied.