Many major candidates doing the mandatory Iowa State Fair visit often just do a quick in-and-out, hitting up the Butter Cow, Pork Tent and maybe one other location before leaving. Not so for Mike Pence.

Donald Trump’s running mate spent a little over two hours at the State Fair on Saturday afternoon, hitting up eight different locations in a long and winding tour across the fairgrounds. A large contingent of local and national media followed Pence’s journey, and the Indiana governor was joined by his wife, Karen, and Iowa Republican leaders like Terry Branstad, Kim Reynolds, Bill Northey and Paul Pate.

Like Tim Kaine’s appearance on Wednesday, Mike Pence’s visit to the State Fair wasn’t widely publicized beforehand. Most fair-goers were surprised when they saw all the commotion, and many tried to take pictures and shouted words of encouragement. Some others, though, didn’t know who Pence was. 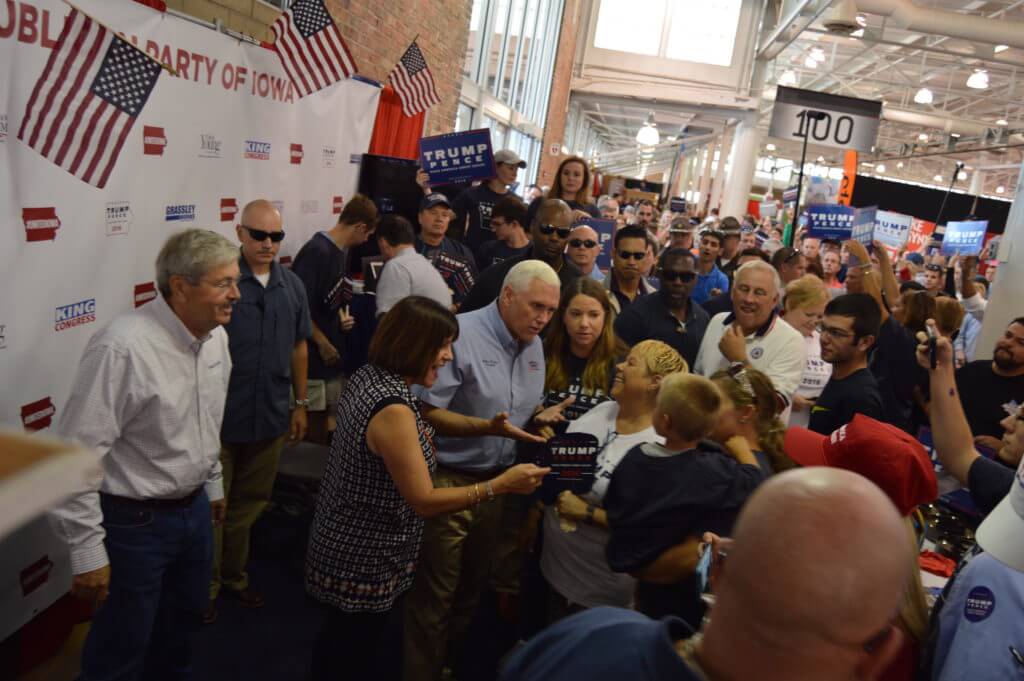 Pence met privately with top Republicans before entering the fairgrounds at the western entrance, walking down the main concourse to the Varied Industries Building. There he greeted excited Republican activists at the Republican Party of Iowa’s booth near the entrance, then stood on a chair to give a brief speech as supporters chanted “We like Mike!”

Mike Pence talks to a gathering of Republicans at the Iowa State Fair pic.twitter.com/EGGcpg5rcI

“This is a bucket list day for me, we’re at the Iowa State Fair with Terry Branstad!” Pence shouted with Branstad standing next to him. “Iowa always plays such an important role in the choice that America makes, but I know that Iowa will lead the way when we elect Donald Trump as the next President of the United States of America!”

On his way to the beer tent, Pence stopped at WHO TV’s “Cast Your Kernel,” where he, Branstad and his wife added to the Trump total (he was currently outpacing Clinton in the unscientific poll by 12%). He held up the Trump jar of kernels to the crowd when asked who he voted for. Branstad explained that he’s been in a few of these kernel contests himself, and that the results are “pretty accurate” (they typically skew Republican with the more-rural makeup of the Fair crowd). 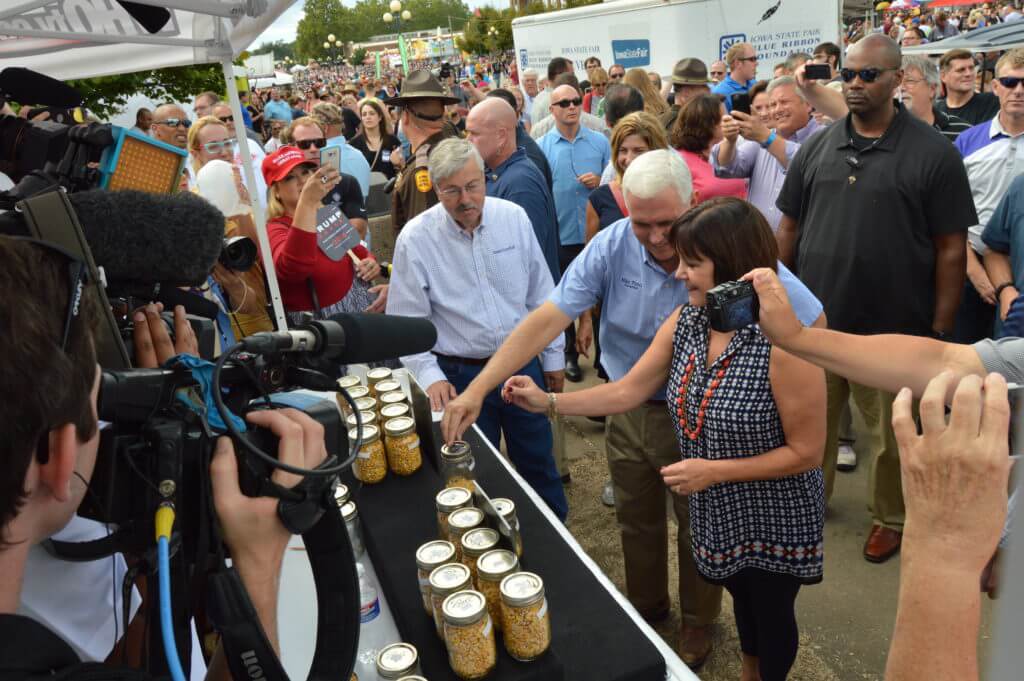 The group made their way over to the beer tent, shaking hands with some local patrons there as Tana Goertz, the Trump campaign’s Iowa co-chair, introduced Pence to the crowd. Not everyone there was too happy, though, as a table of people watching Branstad and Pence enter complained about the music getting shut off and shouted “we don’t care” as the politicians passed by.

Then Pence and company made the long stroll south to the Cattlemen’s Beef Quarters and stood in line for food. Pence picked up a Hot Beef Sundae before sitting down for a chat with Branstad, Northey and others.

Finally, he made the much-anticipated pilgrimage to the Butter Cow. He took a selfie with Branstad, his wife and the Butter Cow in the background. Unlike Kaine, Pence did not seem as impressed with the butter Star Trek Enterprise sculpture.

Pence grabbed some lemonade on his way out of the Agriculture Building, stopped for a quick TV interview, then went to flip some pork chops over at the Pork Tent. At that point he encountered some protesters from the Democrats and NARAL. One person was dressed up as a duck with signs reading “Donald Ducks Releasing His Tax Returns.” NARAL volunteers had signs reading “Make Misogyny Great Again.” Pence has been a big target by pro-choice groups for vastly restricting access to abortion in Indiana and slashing Planned Parenthood and family planning funding. 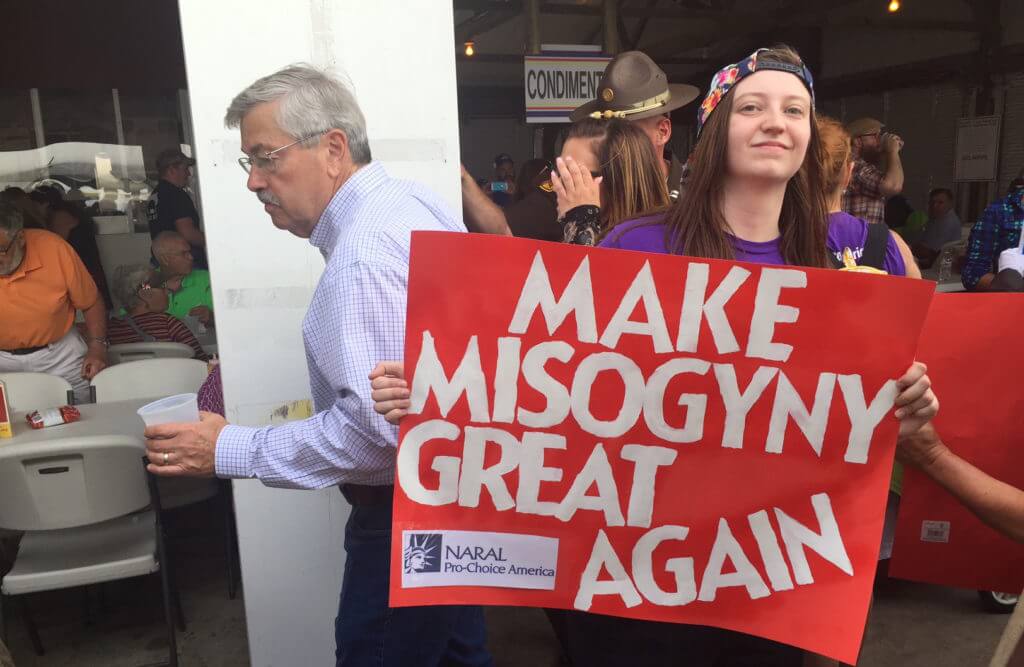 Many in the pro-Trump crowd that surrounded Pence near the Pork Tent began chanting “Lock Her Up!” when the protesters got near to press Pence on Trump’s tax returns. 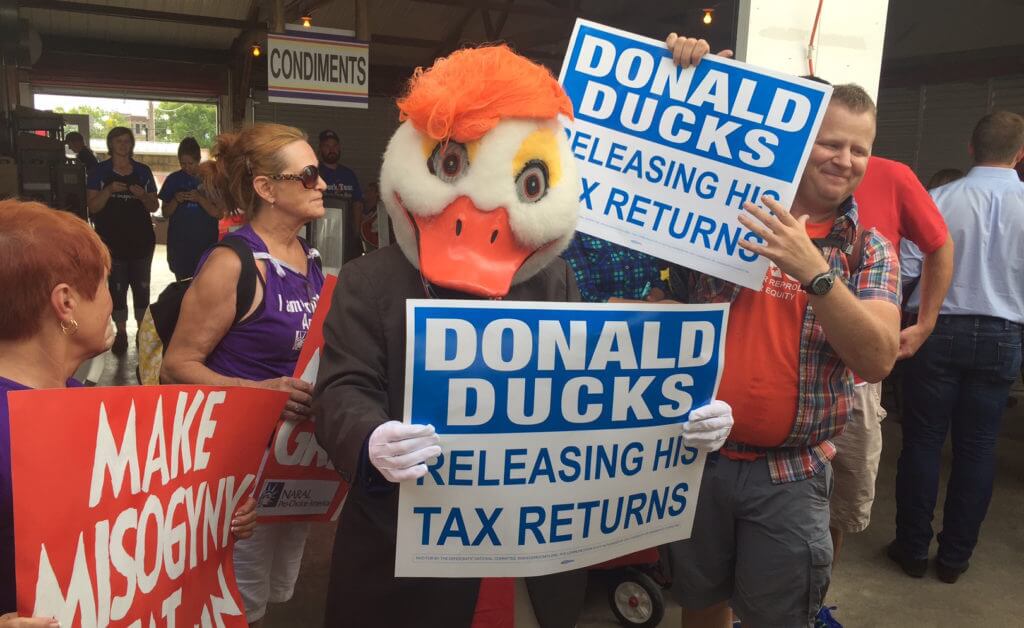 After a walk through the back of the Pork Tent, Pence was off, headed back to Indiana for the evening. Both vice presidential candidates had now visited the Iowa State Fair, one more sign as to just how close the fight for Iowa is expected to be