In the year of Donald Trump, Democrats are increasingly looking to make inroads into independent and Republican-leaning suburban voters, typically those with higher education and higher income. So that’s exactly where Democratic Senate candidate Patty Judge was this weekend, going door-to-door with State House candidate Jennifer Konfrst in West Des Moines.

If Judge is to pull off an upset win against six-term incumbent Chuck Grassley this November, she’ll need Trump’s poor poll numbers to pull down Grassley’s, who has aligned himself closely with the bombastic nominee (though Trump is in an essential tie in Iowa in recent polls). Grassley has already seen his reelection numbers look much weaker than usual, in part due to his refusal to hold Supreme Court hearings. And there appears to be no better place for that opportunity than in the Des Moines-area suburbs in Polk and Dallas County.

In the most recent Suffolk University poll this month, Clinton’s best region of the state came from the Central Iowa/Polk County region. There she bested Trump 50% to 33%. Barack Obama beat Mitt Romney by a 12-point margin in Polk County in 2012, so Clinton’s current 17-point advantage is likely thanks to unusually strong support in the suburbs.

Grassley still holds the advantage around Des Moines in his matchup with Judge, according to the same Suffolk poll. He leads her 50% to 41% in Central Iowa/Polk County, better than his lead in Northeast Iowa, 49% to 47%, and much better than in Southeast Iowa, where he trails 45% to 49%. So it seems like there’s some room for Judge to tie Grassley to Trump’s poor standing in Central Iowa.

On Aspen Drive in West Des Moines, Judge and Konfrst went up and down a street to targeted houses to meet some hopefully-persuadable voters in person. As lawnmowers buzzed in the background, the pair hit doors of Democrats, Republicans and independents. 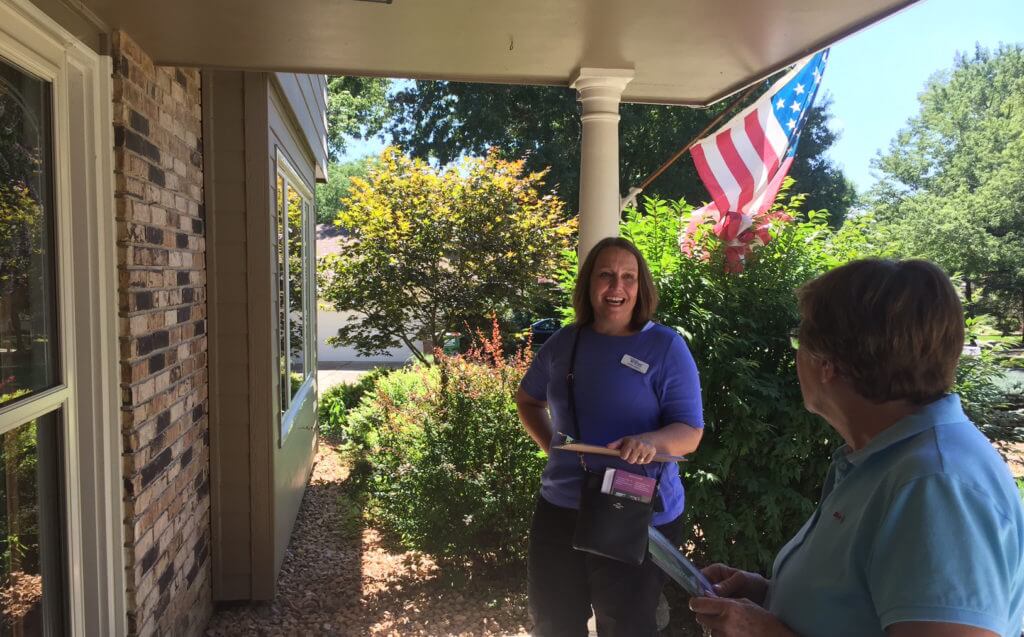 “Yes, I hear about it everywhere we go,” added Judge.

The first several doors they go to already have fliers on them from Chris Hagenow, Konfrst’s Republican opponent and the State House majority leader. Konfrst points out the notepads he leaves at each door, and Judge and Konfrst agree there’s better things Democrats can spend their campaign cash on.

“Hi, are you Thomas?” Konfrst asks the man who appears at the door of their third house. “My name’s Jennifer Konfrst, I’m a candidate for the Iowa house, and this is Patty Judge. I’m running because of mental health and education funding issues. I live over in Windsor Heights and I teach at Drake University.”

“Eh, you know, I don’t really have anything important to me,” the man replies when asked what major issues he cares about.

“You’re telling me you weren’t sitting on your couch, waiting for me to come by?” Konfrst jokes.

“I now live in Albia, but I used to live in the area up until about 2 or 3 years ago, just over on Pommel Circle,” Judge says in introducing herself. “I feel like I’m just up and down the neighborhood.”

It’s nice weather out for once, and one voter tells the two that she already had two campaigns come by earlier in the day. Most houses they stop at have dogs, large and small, that greet them and occasionally interrupt their conversations.

“I used to knock doors and they’d sometimes be a quarter of a mile apart, and they’d have angry dogs,” Judge notes of her time when running for local office. “That’s the worst. I can take the walking.”

“One of the things I’m getting out of this is how cute you can decorate your door,” Konfrst says as they appreciate the well-adorned houses on their route. 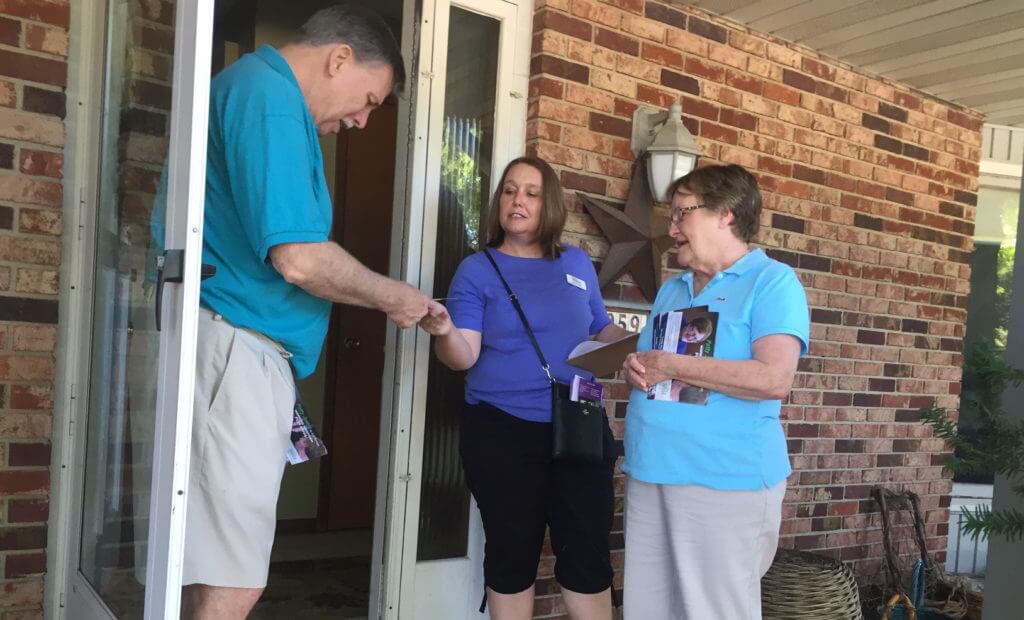 While Konfrst is facing a well-known Republican who enjoys a hefty $222,913 campaign war chest, she has hope in the past results and current trends. She mentions that there are 941 fewer Republicans in the district than in 2012, when Hagenow won by a mere 22 votes. His win in 2008 was only by 93 votes. So in another presidential year, this one where the Republican presidential nominee is tanking in places like Hagenow’s suburban Windsor Heights/West Des Moines/Urbandale-based district, Democrats believe they can finally knock him off.

“I had a couple that was two no-parties in West Des Moines who have never voted for a Democrat in their life and they’re going to vote straight-ticket Democrat,” Konfrst recalls from some of her past door-knocking sessions. “They said that if a party’s going to nominate Trump, that means they think like he does, and they’re done … Everyone else has been unsure who they’re voting for at the top, but they’re open to voting for me.”

And that’s about how the afternoon knocking doors with Judge goes – a lot of people open to support, few ready to commit yet at any level. As long as that continues in these suburban precincts that used to be solidly Republican, Democrats like Judge and Konfrst stand a decent chance at beating well-liked incumbents. But there’s still a lot more doors to be knocked – on both sides – between now and November.