It seems the effort of many top Iowa Republican elected officials and leaders to ingratiate themselves with Donald Trump has succeeded. At the rally in Des Moines yesterday, Trump pledge to keep the Iowa Caucus first in the nation, even if he has some reservations about the caucus process.

“Now, you know that Iowa, they’re talking about putting you at the back of the pack, you know that, right?” Trump told the crowd of about 2,000. “Not going to happen if I win, believe me. You’re going to stay right where you are. Because there’s a great history to it, there’s a great beauty. Iowa is an amazing place, you’re going to keep your place in history, that first state.”

Trump, who lost the vast majority of the caucus states, still pointed out his reservations with the process, and also seemed to joke about his stunts in Iowa to win over caucus-goers.

“I don’t love the caucus system, by the way, I could do without, I like to vote, I like where you walk in and vote and leave, not when somebody takes your people and they wine them and dine them,” he said. “Let’s go have dinner, let’s take a flight – you like to see Iowa from a helicopter, right?”

But the efforts of top Iowa Republicans, including Jeff Kaufmann, Terry Branstad, Kim Reynolds, Chuck Grassley and Joni Ernst, to win over Trump’s affection for the Hawkeye State seem to have overcome the nominee’s misgivings. Trump even mentioned how much he likes many of the Iowans he’s met, likely referring to Branstad and his son, Eric Branstad, who runs his Iowa operation.

“I’ve developed so many great friends in Iowa, and I learned a lot about the world of politics from Iowa,” Trump said. 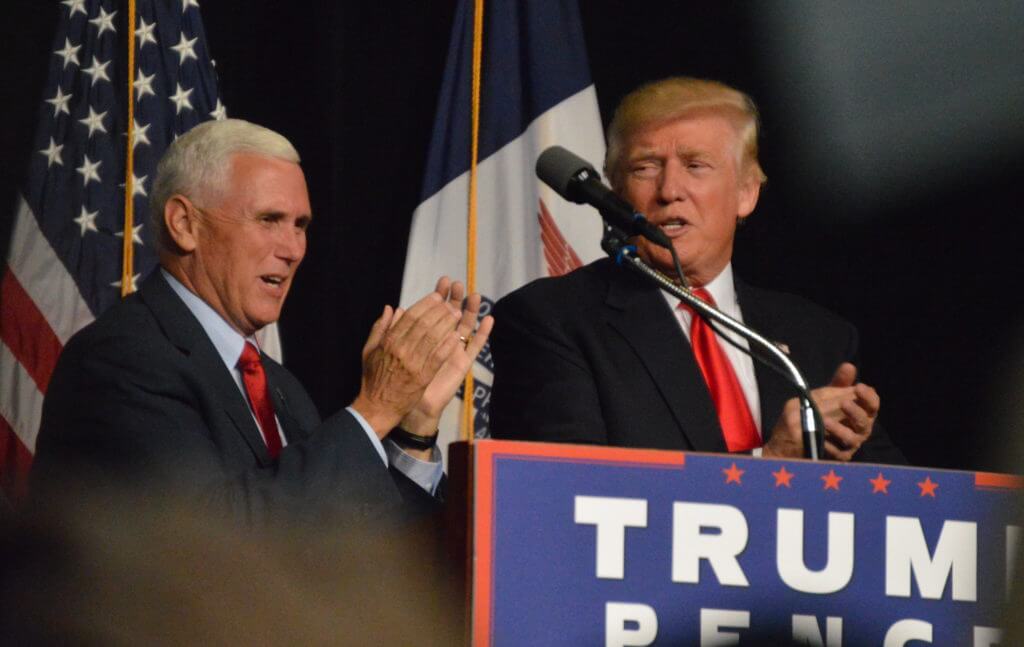 Compare yesterday’s reception in Iowa to the one Trump got in Wisconsin later that day. In Iowa Branstad and Reynolds gave energetic speeches in support of Trump. In Wisconsin Trump dealt with the fallout over his refusal earlier in the week to endorse Paul Ryan, in a bit of revenge for Ryan’s earlier hesitancy to fully embrace Trump. The Republican Speaker of the Wisconsin House welcomed Trump with an op-ed saying he was “embarrassed” that Trump was their nominee. There was a lot of extra drama in Wisconsin that distracted from the day’s message.

However, despite the success, there’s two major long-term dangers that remain for Iowa Republicans’ embrace of Trumpism.

The first, of course, is if Trump goes down to spectacular defeat in November. The national polls this week show him down anywhere between seven and fifteen points. That’s entering disaster territory if he doesn’t turn it around, and Democrats (and fellow Republicans in primaries) will gleefully tie Reynolds and Ernst to Trump in their future campaigns. 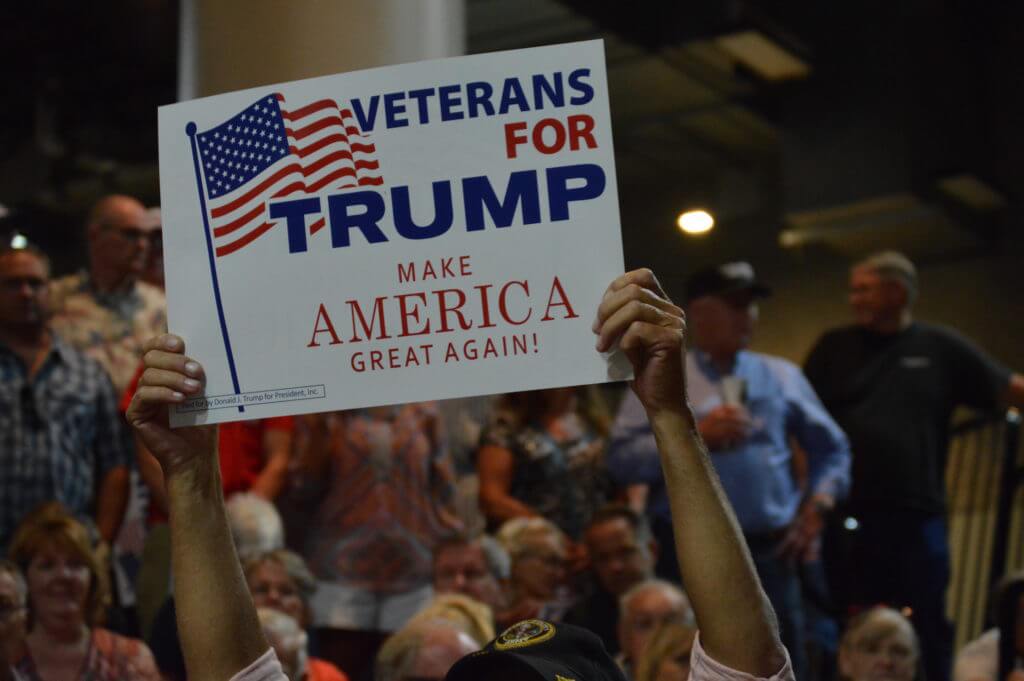 The other danger lies with the type of people and anger that’s coming into the party. Branstad stood awkwardly silent as the crowd erupted into a chant of “lock her up!” during his speech. And a few dozen people bought t-shirts with the words “Trump That Bitch,” along with a crude reference to Monica Lewinsky, outside the venue and wore them at the rally. That’s not something you ever see at any other type of political event. And it wasn’t just a bunch of ya-hoos wearing them. A couple volunteers for the Trump campaign bought some on the way out. 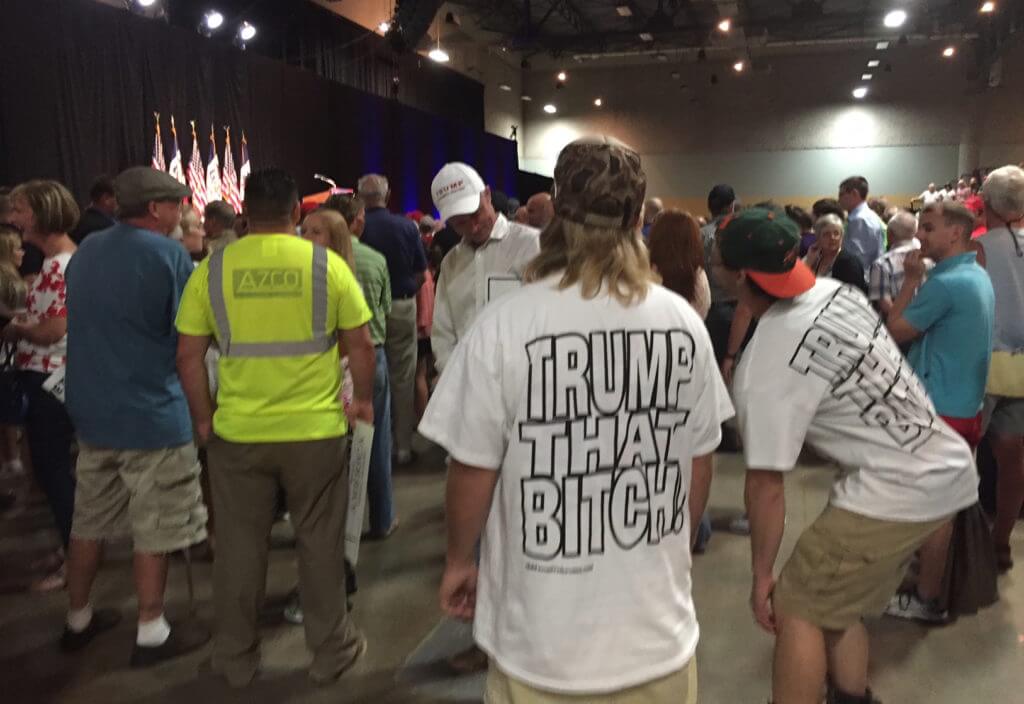 Unfortunately, we’ve gotten to a point in this cycle where that type of rhetoric and nastiness toward Clinton has become par for the course. Many Republican leaders seem to just accept it at this point and turn a blind eye. But imagine if Republican activists started showing up to rallies for their Iowa candidates with signs calling Liz Mathis or Andy McGuire or Pam Jochum a “bitch.” How much fallout would even one instance of that cause in the Iowa press and among voters’ perception of the Iowa Republican Party? That might seem far-fetched, but they’re opening the door to this type of anger and these kind of people – it might not be too easy to close it later on.

Iowa Republicans have achieved an important victory in wooing Trump, after he easily could have held a grudge over losing the Iowa Caucus. But they’ll need to keep a close eye on how this embrace of Trump – and everything that comes along with it – could fundamentally change their party for the future.