Iowa Senate candidate Patty Judge put out a new TV ad today two weeks in advance of the June 7 primary. It highlights her leadership as the Homeland Security advisor for Iowa during the 2008 floods. It’s a little heavy on the “let’s work together” rhetoric, but seems to lay the foundation for her eventual contrast with Chuck Grassley as a creature of D.C.

It’s a pretty decent TV ad, well-shot and does a nice job of framing Judge’s past leadership in her role as Lt. Governor. I can’t help but think it’s not quite impactful enough, however, in a race where she’s really going to have to take it to Grassley, and where she still has a problem with progressive voters in the primary. This seems more like a spot to shore up her past record than to define why voters should abandon Grassley. I think Democrats might be more energized to turn out for her in the primary if she ran on a very anti-Grassley message in her paid media.

Regardless, it’s still a nice spot that should help her in both the primary and general. And yet, sadly, due to my peculiar sense of humor, I can’t just watch a political ad and not overthink it.

So let’s break down this ad, Starting Line style. Here’s the full ad:

First off, where is she? It seems her campaign team has created a simulated disaster control room, complete with staff and flood-specific imagery. 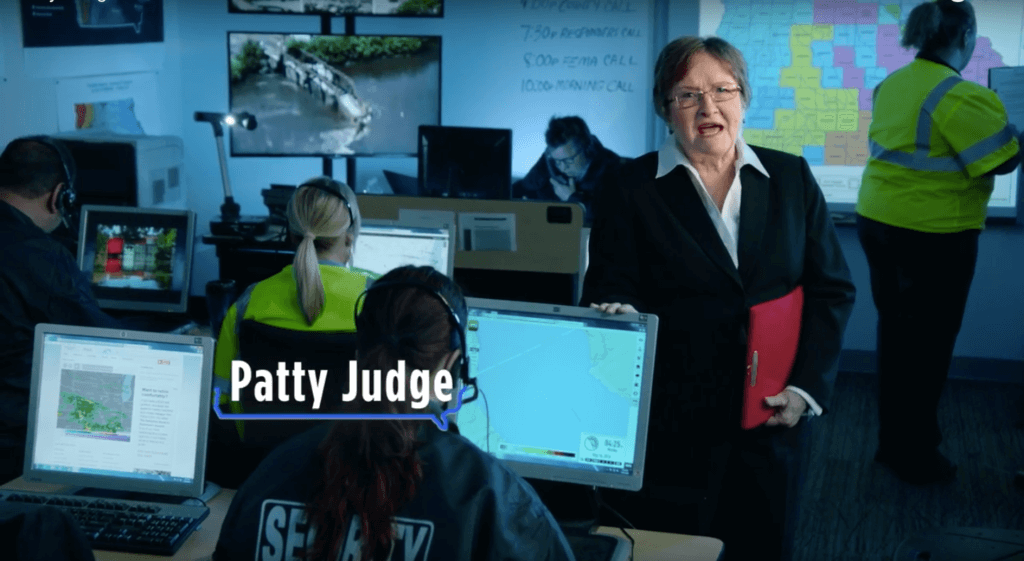 I have to hand it to her TV consultants. The attention to detail here is very nice. I believe that’s an Iowa floodplain map up on the back wall. The computer screens show a flooded Cedar Rapids street and a weather tracker. I’m not sure what the screen closest up is showing. On the back wall there’s a list of supposed conference calls with county and FEMA officials.

I may have spent a lengthy amount of time trying to identify which Des Moines consulting firm’s office this was shot in by trying to figure out where I’ve seen that carpet pattern before. I think I have a good idea. [Update: my sources tell me it was at DMACC]

But here’s the thing: what are we, as viewers, supposed to make of this? Is Judge in an actual emergency response headquarters? Has she time-traveled back to 2008 and is speaking to us from the past? 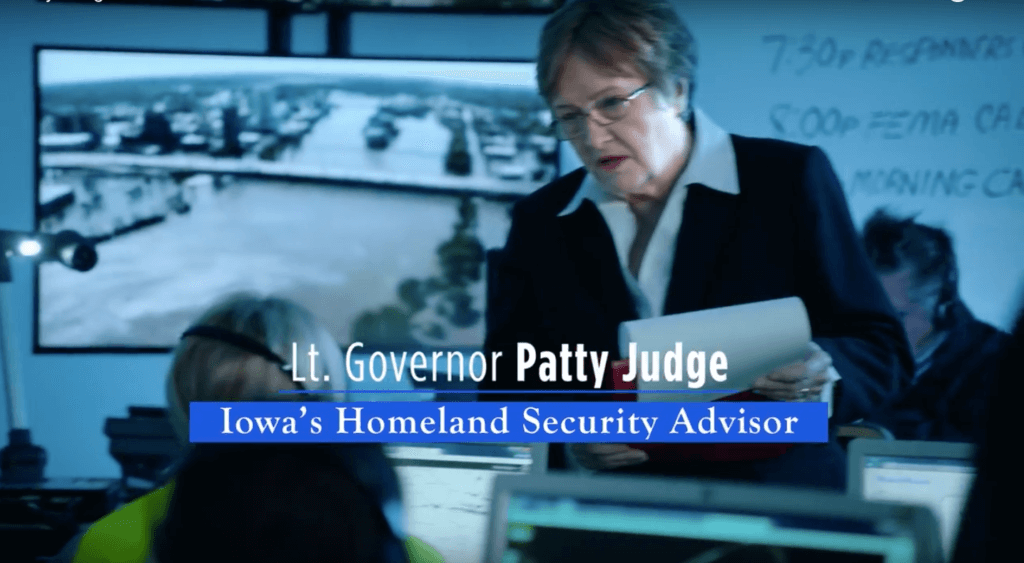 What is she saying to this worker? Is she giving her orders of where to send flood relief supplies? And why is she interacting with these people when she’s also shooting a television ad for her current Senate race? If we’re supposed to believe this is a real emergency response center in the present, why is Patty just going around, picking up phones? She’s not the Lt. Governor anymore. What kind of security does this government facility have that they allow random politicians to waltz right in and start shooting a TV ad?

“Yes, director? This is headquarters. That Patty Judge woman is here again and she has a camera crew with her this time. What should we do?”

And is that Cindy Pollard in this shot? Apparently one of Iowa Democrats’ best volunteers in the state also moonlights at Homeland Security. So what are we supposed to make of this ad? Is Judge in the past or the present? There sure are a lot of continuity and time-space problems with this whole setup. Perhaps it’s an homage to Sunday’s time-traveling Game of Thrones episode where events in the present affected the past.