Iowa Democrats gathered at four district conventions around the state on Saturday to select national delegates from the Iowa Caucus. The results mirrored what happened back on caucus night, with Hillary Clinton maintaining her one-delegate lead from the Congressional district level. Other votes taken yesterday will likely shape the Iowa Democratic Party long into the future.

Bernie Sanders supporters were elected to about half of the state central committee posts, many of whom are relative political newcomers and considerably younger than those currently serving. That committee has a big impact on how the state party is run, what projects it takes on and – most importantly – chooses the state chair. Andy McGuire may run for Governor in 2018, likely leading to another open and competitive race for state chair in January of 2017.

To get to that point, however, the delegates at the conventions had to vote.

And vote some more.

The time between those votes grew long throughout the day, as rules committees sometimes took 45 minutes to count a vote. The party’s new attempt to simplify the process by voting with a barcode that could be scanned seemed to do little good, if any. 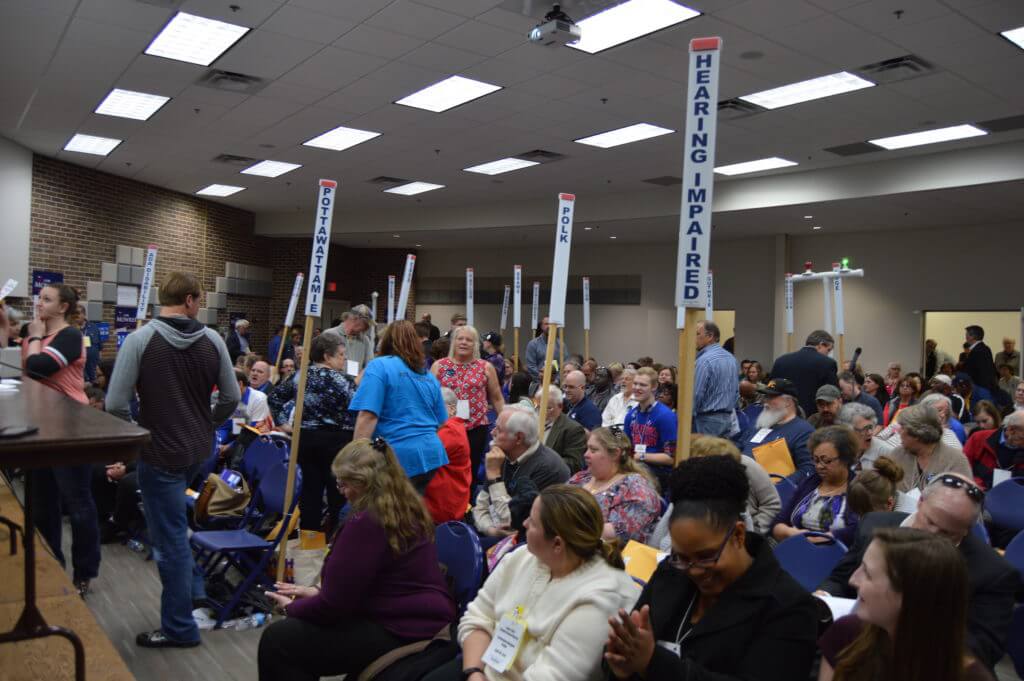 The 3rd District convention in Creston technically spanned two months since the calendar rolled over to May at midnight, and there were times where it felt that long. Many tried to fill the dull gaps.

The Sanders room played the White House Correspondents’ Dinner on a screen.

A 12-week-old puppy training to be a service dog spent the day at convention and was introduced to the crowd.

A Sanders supporter sung a song she made about the Vermont Senator.

The 3rd District Convention began check-in at 8:00 AM (with many volunteers arriving much earlier), and did not officially finish until 12:54 AM early the next day.

The good news, however, is that the overall mood remained cordial between the Clinton and Sanders camps. Unlike the contentious confrontations that plagued the Polk County convention, both sides largely played nice and were happy and patient throughout the day. Communication over the rules was vastly improved, the Clinton and Sanders sides spoke with each other much more beforehand, and everyone seemed to appreciate convention chair Bill Brauch’s deliberate and even-mannered demeanor.

The voting took an exceptionally long time, but it was explained that they were simply being extremely careful and thorough, which kept most happy. A rumored motion by some of the more radical Sanders delegates to throw out the Polk County delegation never materialized.

The day began with speeches from the three Democrats running for Congress in the 3rd: Desmund Adams, Jim Mowrer and Mike Sherzan. All their campaigns had large teams on hand. Adams spent over a half hour doing an impromptu Q&A in the room where the alternate delegates waited several hours until it was determined if they would be seated.

Patty Judge visited early as she made her round of the district conventions across the state.

“I’m a farmer, I have political experience, I have high name ID, I have the ability to network across this state,” Judge said at the end of her speech. “I can’t promise you anything about this race, except this: I will work very hard for you every day. I am not afraid of Chuck Grassley. He will be in for the fight of his life.”

Fellow U.S. Senate candidate Rob Hogg arrived to Creston with an extra bounce in his step, fresh off the new endorsements from AFSCME Council 61 and the Iowa Federation of Labor, two of the biggest allies you can get in an Iowa primary. Hogg gave a stem-winder of a speech – notably much improved over his time in the race – and jumped off the front of the stage after finishing, shaking hands on his way out.

Gronstal entertained the crowd with a rallying speech about the November election and what Democrats accomplished in the Legislature. He noted he was running on only seven hours sleep from the last two days. Still, he made the drive to Creston from Council Bluffs and stayed there until after midnight, remaining to cast his vote for his good friend Linda Nelson’s bid for the state central committee.

The morning largely consisted of platform debate as the rules committee determined which alternates were seated. A contentious discussion over opposing super-delegates took a while, and failed by just one vote. Other discussions and votes centered around very exciting things like changing “or” to “and/or” in a platform plank sentence.

Both the Clinton and Sanders sides made organizing efforts to ensure all their delegate slots remained filled throughout the day. The Clinton side’s operation was certainly larger, with several staffers on hand who had been organizing for the district conventions for weeks. A bus brought in some of their delegates and hotel rooms were reserved in case the night went long. Clinton leaders stood at the exit doors during lunch to insist any delegates leaving that they come back.

The Sanders group held together quite well throughout the day. They brought in alternates from nearby towns later in the day to replace their pool of alternates. One even arrived to replace a delegate around 11:00 PM.

Still, by about 7:00 PM both sides had exhausted their groups of alternates to replace delegates who got tired and left. The Clinton group maintained its lead through the important realignment period that determined the national delegates, ensuring Clinton still got a 4-3 split out of the 3rd District.

The Sanders group elected Ingrid Olson, a government inspector, Barb Kalbach, a longtime leader of Iowa Citizens for Community Improvement and Joel Potter, a probation officer, as their national delegates.

Interestingly, the women running for Sanders national delegate all focused largely on why they support Sanders. Almost all the men made a specific point to talk about how they “can’t be swayed” for any other candidate. No one explicitly talked about the “Bernie or Bust” movement in Creston, but they did in the 2nd District.

The Clinton group elected as their national delegates Representative Ako Abdul-Samad, Priscilla Ruhe, Ora McQueen and Sean Bagniewski, who took a lot of heat from defending the Clinton’s delegate count at the Polk County convention.

It wasn’t until nearly 9:00 PM when all the national delegate selection finally ended. The voting process took an excruciatingly long time, odd considering America has a bit of a history with voting, and one would think we could’ve learned some best practices by now of how to efficiently count votes. The Republicans’ 3rd District convention had all of their delegates and committee members voted on by 6:00 PM; it took the Democrats almost seven hours longer.

Attrition made its mark, and eventually the Sanders camp outnumbered Clinton’s slightly by the time the two groups reconvened to elect state central committee members.

The Sanders group began with a slate of four candidates for the eight spots, though other Sanders supporters ran and the group largely voted for them as well. Clinton began with a larger number, but they whittled it down to eight people.

After a couple rounds of balloting, Clinton backers took five spots on the state central committee while Sanders supporters obtained three. The four men were all Clinton backers, while three of the women were with Sanders, all rather young. In a rather notable upset, political newcomer Holly Herbert defeated longtime Pottawattamie County chair Linda Nelson for the last female slot.

The members from the 3rd District are:

While much was made over how many central committee members Clinton and Sanders got, it’s not like either side was explicitly trying to run the tables to run the party solely in their image. Both just seemed to want to make sure they had decent representation. It will be interesting with a closely split contingent of Clinton and Sanders backers. Both will have to work closely together, which could provide a great mix of fresh ideas and institutional knowledge.

The Clinton-Sanders central committee split was 4-4 in the 4th District, but it’s unclear exactly what happened in the other two. Initial reports from some suggested a relatively even split in both those places as well.

The thing to watch is how it could impact the election for the next state chair, which comes with it very serious implications. With McGuire unlikely to run for reelection, a smart person would start planning their run today.

Finally, perhaps the most noteworthy event to come out of the 3rd District convention was the election for the National Elector. That’s the person who officially casts Iowa’s vote in the electoral college, bound to vote for whomever won the state. Delegates selected Jack Schuler, a transgender Democrat whose legal name is Elyse. Schuler’s election is Iowa’s first transgender person to serve as a national elector, and quite possibly the first in the nation.