Most politicians typically advocate for more jobs and economic development. Unless you’re Rod Blum, apparently. The Iowa Congressman from the 1st District set off a small firestorm of controversy and criticism on Tuesday evening when he tweeted out from his personal account that he hoped the city of Washington D.C. would suffer an economic recession.

Why would he wish such a thing on American people? Because apparently he was upset by some construction cranes he saw in the D.C. area, and figured that economic success there was bad and only caused by misspent taxpayer dollars.

There’s more than one problem with that statement, first among them that the construction site he was using to demonstrate D.C.’s growth isn’t some massive new federal bureaucracy, it’s the new wharf. That’s D.C.’s new large private development of shops, restaurants and housing along the waterfront, meant to improve that area of town and provide a new tourist destination area. Those kind of urban revitalization efforts that bring new jobs and opportunities are usually praised no matter where in the country they’re built. 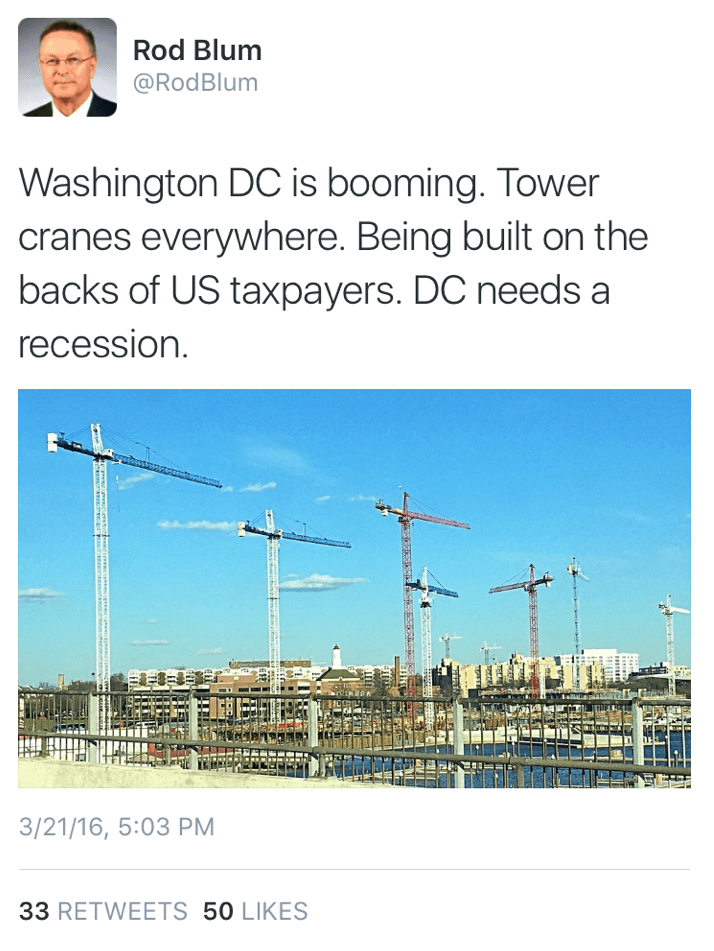 Well… it turns out wishing that a “booming” American city goes through the pain and suffering of a recession isn’t all that wise of a thing to do. Criticism was swift and harsh of Blum’s attack. Blum’s personal Twitter account may have less than 1,000 followers, but his Tweet was quickly picked up and widely shared around D.C. and beyond. So much so that “Rod Blum” actually topped the Twitter trends in D.C. for part of Tuesday evening. 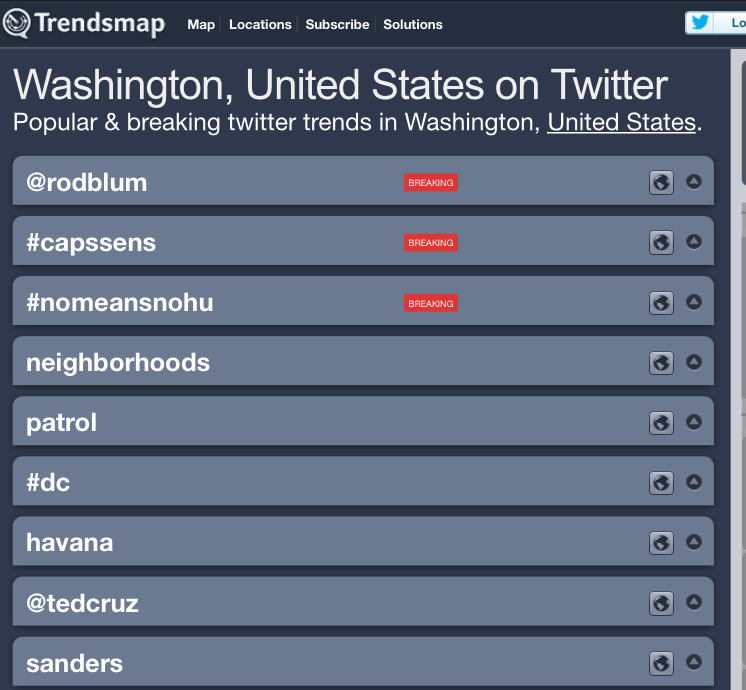 Politicians often rail against Washington D.C., portraying it as the embodiment of big government that wastes taxpayers’ money. But most are smart enough to make a distinction between the political class or the simple metaphor that is D.C. and the actual everyday people who live and work there.

Over 670,000 people live in the District of Columbia, along with plenty more in the surrounding Maryland and Virginia suburbs that are a part of the metro area. It might surprise Representative Blum to hear this, but they’re not all politicians or lobbyist fat cats. It may also come as news to Blum that federal employment is actually down in the D.C. area during President Obama’s second term – the recent growth in the nation’s capital has largely been from the private sector.

So all of that didn’t sit too well with D.C. residents, who started replying to Blum’s tweet… in an overwhelming negative fashion. 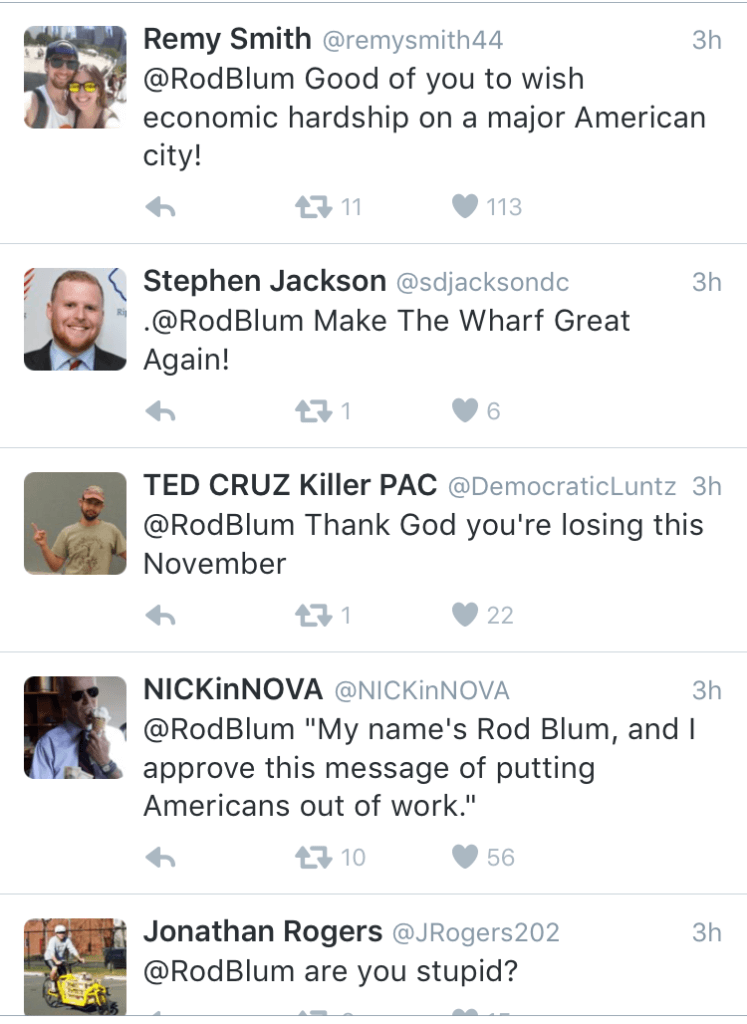 Actually, they were really, really unhappy. 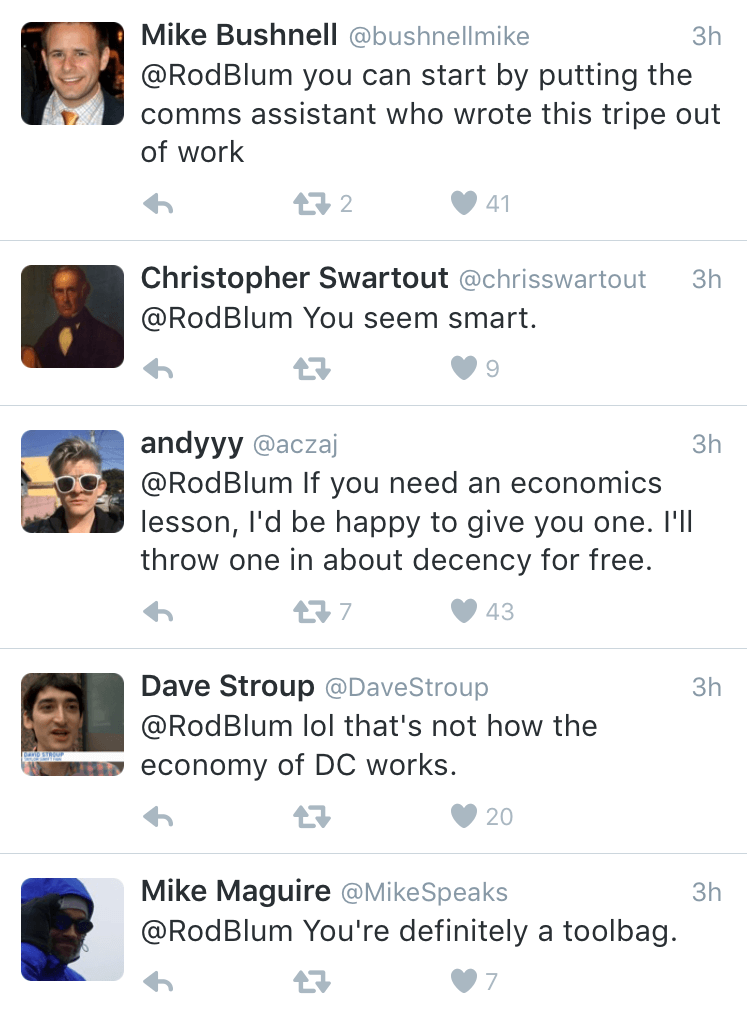 In fact, Rod Blum should probably watch carefully the next time he orders a coffee in D.C. to make sure the barista doesn’t spit in it. 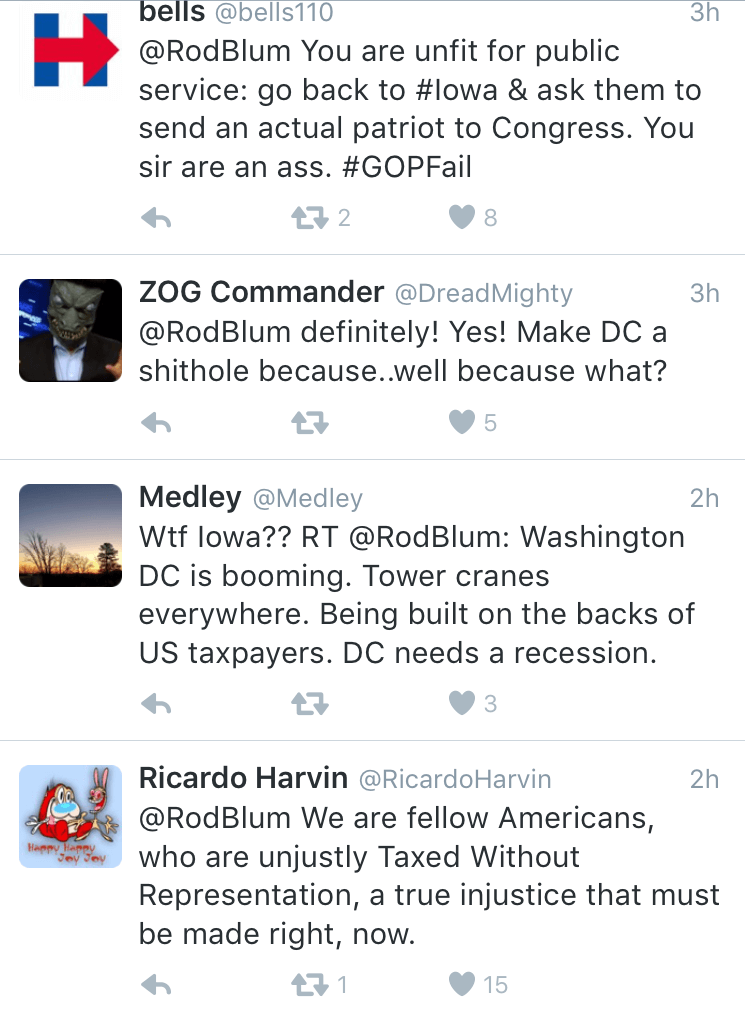 Blum is considered one of the most endangered House Republicans in the entire country, a first-termer in a D+5 partisan index-rated district. House Republican leadership have a lot of seats to defend in 2016, especially with Donald Trump likely to be at the top of the ticket. Unforced errors like these make it more and more likely that the national party could abandon Blum, who’s already a bit of an outsider after voting for Steve King’s pick for Speaker in the House election over John Boehner.

Blum will face either Pat Murphy or Monica Vernon in the general election.