A crowd of over 50 Iowans formed a rally outside the federal building that houses Chuck Grassley’s office in Des Moines on Monday. They were there to implore the Senate Judiciary Chair to hold hearings and a vote on Merrick Garland, President Barack Obama’s nominee for the Supreme Court vacancy.

While “Do Your Job” protests have been going on for several weeks in Iowa, this one saw NextGen Climate Action, the League of Conservation Voters and MoveOn.org join the cause. Each one helped organize some of its members to attend the noontime demonstration. Their addition added to the many Iowans who have been coming out to various actions put on by the Why Courts Matter group, which has pressured Grassley to fill other court vacancies as well since last year.

“NextGen Climate is really committed to holding politicians accountable for standing in the way of progress and building the clean energy economy we’re working to create across the country,” said Tessa Lengeling, the communications director for NextGen Iowa. “Senator Grassley, Iowans expect a lot more from him and to be above political games. And to fulfill his constitutional duty to fill a full Supreme Court bench.”

Progressive groups are ratcheting up the pressure on Grassley while the Senate is on recess and the Senator is back in the state meeting constituents. The current recess lasts until April 3rd.

“If we don’t talk to him now, when he goes back to Washington he’ll be stuck in his own echo chamber just like before,” Vince Martinelli, an organizer with NextGen, told the crowd. 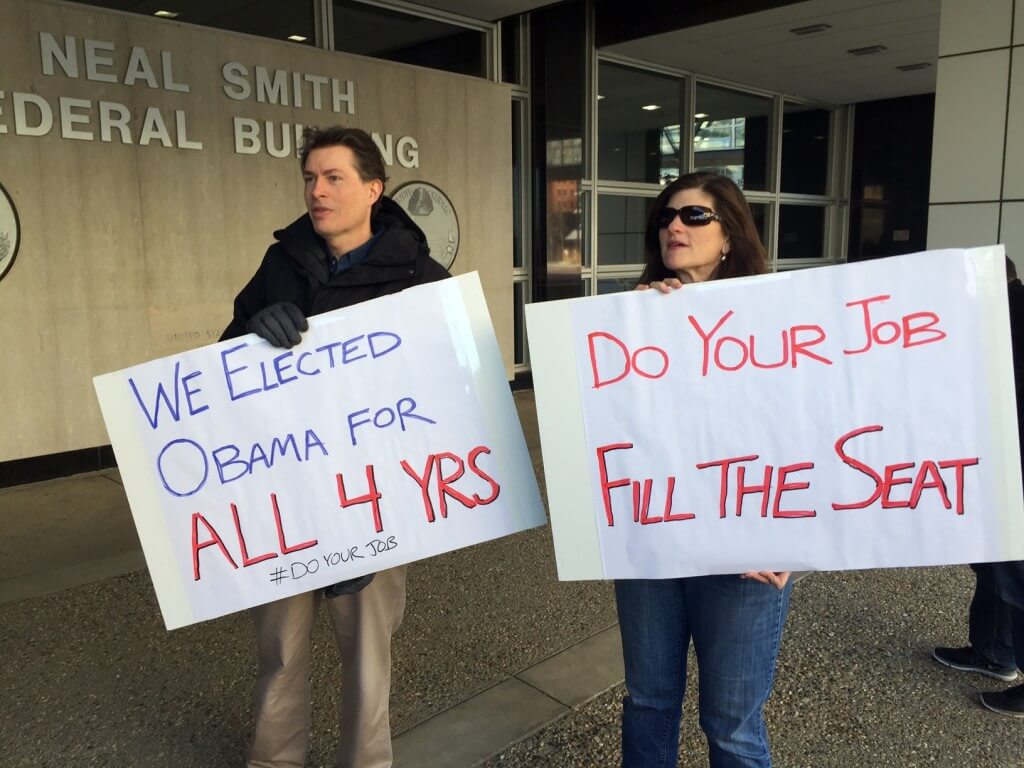 One of Grassley’s potential Democratic opponents, State Senator Rob Hogg was also on hand at the event. He and a campaign aide chatted with attendees and talked about Grassley’s obstruction.

“I think the overwhelming sentiment from Iowans is that it’s time for Senator Grassley to step up and do his job and fill the vacancy on the Supreme Court,” Hogg told Starting Line. “President Obama did his job by nominating somebody, now it’s Senator Grassley’s turn to do his job and hold an up-or-down vote.”

The addition of organizations like NextGen, LCV and MoveOn indicated how widespread the frustration over the Supreme Court nomination has become on the left. All have some sort of stake in issues brought before the court and are finding their members mobilized by the issue.

“The fact that it’s being held up for political reasons is not acceptable to a lot of our volunteers and our members,” said Tim Mahern-Macias, the field director for the League of Conservation Voters. Their organization was delivering a stack of petitions signed by Iowans asking Grassley to move the nomination forward.

A plane sponsored by MoveOn.org flew over downtown Des Moines carrying a banner with a message reading “Senator Grassley, Do Your Job.”

“Refusing to fill the vacancy is a direct assault on the ability of the judicial branch to function independently,” Democratic activist and writer Rick Smith of Urbandale said to the group. “Grassley is putting the country at risk by engaging in another tactic of government shutdown by crippling the Supreme Court.”