With the South Carolina primary complete, the first four primary and caucus states are finally done for Democrats. Now eyes turn to the Super Tuesday states, but a collection of contests a few days later on March 5th could mark a Bernie Sanders comeback or solidify Hilary Clinton’s delegate dominance.

The Kansas Caucus offers an opportunity for Sanders to notch another statewide win in his belt with the state’s largely white demographics and caucus format that in theory benefits a progressive challenger. Clinton’s team, even after their large South Carolina win, is taking nothing for granted and is looking to win or at least mitigate delegate losses. Starting Line spent three days in Kansas last week to bring you this preview of the state’s March 5th caucus:

There wasn’t much time for rest after the Iowa Caucus for many of the campaign staffers that were soon redeployed to March states like Kansas.

“We woke up, and then at noon the next day [after the Iowa Caucus] we got our redeployment assignments and then I was writing the state plan,” says Shelby Iseler, Sanders’ Kansas state director and the former deputy field director for Iowa.

Six of Sanders staff from Iowa were sent to Kansas, joining a political director here that’d been working for a few weeks. The Clinton campaign shied away from giving specific numbers of their Kansas operation, but Starting Line counts at least a dozen staffers on the ground, and they may have as many as twenty. Several staffers had been placed here months ago.

“When this campaign first launched, we made sure we weren’t focused just on the early states,” says Lauren Brainerd, the state director for Clinton who served as a regional field director in Iowa. “So back in April is when the first organizing happened here in Kansas. We had one of our staffers get here late in the summer. The staff has changed a little bit since we got started, but we have been making sure we’ve been building an organization here since day one. It’s just a sprint to make sure we can turn out as many Democrats for Hillary Clinton as possible ‪on March 5.”

The sprint is now on in earnest in Kansas, with both sides doing everything they can to identify, inform and activate their supporters to turn out to the caucus many don’t know much about.

“It’s a shorter amount of time,” explains Iseler. “We don’t have the ability to be everywhere. In Iowa, by the end of it, we were everywhere. We have to go where the support is. Find the support and harness it. Given the short time frame, we won’t be as spread out as we were in Iowa.”

“The biggest thing we are working on is that we are literally covering every part of Kansas,” Brainerd claims in contrast, noting they have two staffers deployed to deep-red and rural western Kansas. “We are making sure not to ignore any part of Kansas. We are literally fighting for every single vote, every delegate we can.”

Both sides appear to be taking slightly different approaches in their quick efforts in Kansas. The Sanders team is harnessing their large standing volunteer base (read more on that in our previous post) to encourage their less-likely voters to actually make it out to the caucus.

“It’s a challenge. You know, we don’t have the upper hand,” Iseler says. “We have people that may be big Bernie supporters, it’s just a matter of letting them know, you want Bernie in office, this is what you have to do. It’s super easy, you just have to show up on March 5th and stand in his corner. It’s a matter of reaching those people, spreading that message.”

The Clinton campaign has an advantage in that most of the elected officials and party establishment are already lined up behind her bid. They’re also taking a more traditional and strategic angle on organizing for what happens in the actual caucus rooms.

“The Clinton folks have reached out to me on what the rules are, how the room will be set up, and all of the details,” observes Representative Jim Ward of Wichita, who chairs his own local caucus. “Haven’t heard anything from the Sanders campaign.”

How The Kansas Caucus Is Organized

Kansas has four congressional districts, with 22 delegates selected for the national convention at that district level. 4 come from CD 1, 7 from CD 2, 6 from CD 3, and 5 from CD 4. 7 more at-large delegates are assigned proportionally based on statewide results. 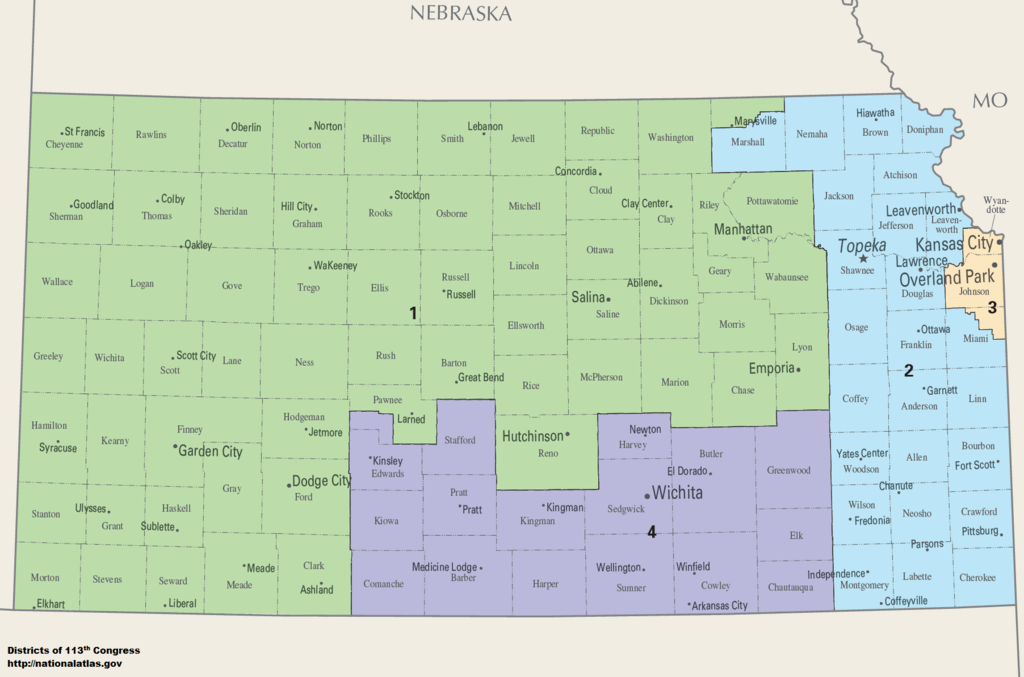 Kansas’ caucus sites are divided up by state senate districts. There’s 40 of those in the state, but since some cross Congressional districts, there will be 47 separate caucus locations.

“It took a little bit of time to figure out the math on that,” State Senator Marci Francisco of Lawrence says with a laugh, who developed much of the party’s caucus rules.

Francisco believes the last time Kansas held a primary was 1992, though everyone’s memories on the subject are a little unclear.

“The concern is that it’s really expensive to have a primary,” Francisco says of why the Legislature hasn’t switched back to a primary after concerns from 2008. “But essentially what we’ve done is we’ve made it an expsense to the party … It is a significant amount of work. When the date was announced the Douglas County Democrats started immediately looking for venues. But there was a lot going on. The best places is the fairgrounds, where we had the caucus in 2008. It’s not available, so we’re at Liberty Memorial Middle School. We’re going to be suggesting people walk or ride their bike or carpool.”

Still, there’s a lot of excitement in Kansas to once again be an important part of the process. Party leaders are particularly looking forward to seeing new Democrats come out to get involved in the party.

“We are full-steam ahead, we have all of our caucus locations set and all of our caucus trainings done,” says Kerry Gooch, the executive director of the Kansas Democratic Party. “I’m expecting us to have a really great tunrount. The longer this race stays competitive, the more people we think will come out.”

“It’s really interesting to participate in a caucus,” says Francisco. “In a community, you’re going to know people who are supporting the different candidates. So all of a sudden you get to the caucus, and you want to be with your friends … If you’re caucusing, you’re really making a choice, and people are making arguments over why a particular candidate is better.”

Memories Of An Exciting And Chaotic 2008

Barack Obama, whose mother was born in Kansas, won the Sunflower State handily in 2008, defeating Clinton 74% to 26%. It was one of his largest margins of victory in that nomination race and is still reflected in how Kansas activists and elected officials remember it. Everyone Starting Line spoke to simply referred to 2008 as “when we caucused for Obama.”

The night of the 2008 caucus itself was certainly one to remember. Thousands packed caucus sites only large enough to hold hundreds, and a blizzard blanketed much of the state.

“The night of the 2008 caucus was cold and rainy and icy,” recalls State Representative Jim Ward of Wichita. “It was out the back door, all around the corner, it took twenty minutes to get in, it was freezing, but people stayed.”

“It was big and loud and it was fun,” adds Ben Cohen, a law student at Washburn University in Topeka who caucused for Obama. “It was packed wall to wall with people. There were people I saw go and sit in the caucus seats for the smaller candidates that were still in the race at the time, literally because there was room to sit down.”

There’s some lingering concern, however, about bad experiences some caucus-goers remember from the overly-packed, unprepared caucus sites in 2008.

Due to the overwhelming turnout, one problem from 2008 was figuring out who was actually there to caucus and who was simply there to observe.

“One of the simplest solutions we’re doing, anybody who shows up to participate at the caucus will get a blue wristband,” Gooch explains. “That way we know you are an actual caucus attendee, you’re allowed to vote.”

Gooch himself spent the last three days of the Iowa Caucus in the Iowa Democratic Party’s warroom to gather ideas of how to run things more smoothly in Kansas.

A Competitive – And Increasingly Testy – Race In Kansas

“There is nobody who captures the enthusiasm that Obama had in 2008,” says Cohen, who is supporting Clinton this year. But the fight between Clinton and Sanders will be a much closer one than the Obama blowout in 2008.

Chelsea Clinton headlined an event for her mother in Kansas two weeks ago, while Bill Clinton attended a private fundraiser in Kansas City last year. Bernie Sanders held a rally last week in Kansas City on the Missouri side of the border, drawing over 7,000 attendees for a midday rally. Judging from the crowd’s cheers when Kansas was mentioned, about 40% were from that state. Sanders took particular aim at despised Republican Governor Sam Brownback to the delight of the audience.

“Especially on social media, there’s a lot more Bernie enthusiasm,” notes Tobias Schlingensiepen, a pastor in Topeka and Treasurer for the Kansas Democratic Party who ran for Congress in 2012.

“I think it’s going to shake out very narrowly,” Cohen believes. “Whoever does win is not going to win by more than a few points, just a few delegate difference. Both have a lot of very enthusiastic supporters”

How Kansas plays out may depend heavily on the states that go before.

“What happens on Super Tuesday?” wonders Ward. “If Secretary Clinton has a big night, will that stifle Sanders enthusiasm and momentum? Why would they go spend two hours on a Saturday afternoon if the candidate’s probably not going to win?”

While the spirited competition between Clinton and Sanders could spur good turnout on March 5th, some also worry about the heated and nasty debates they’re seeing it cause online and in person.

“I’m not sure I want to be in either of these camps in advance of it because I have so many friends on both sides and I’d like to help bring them together in the future because it’s been so vitriolic,” says Schlingensiepen. “In 2008, I didn’t sense this sort of vitriol at all. It’s kind of hard to figure out what’s going on right now … It’s taking on a kind of a religious zeal, kind of strange for even a pastor to see.”

Most hope that’s simply the passion for Clinton and Sanders playing out, and that the party will come together afterward.

“That’s exactly why I’m excited about the caucus,” says Gooch of the enthusiasm generated by the campaigns. “It’s a great time for our county parties to recruit new volunteers. It’s also a great time to find potential local candidates … If you take time out of your Saturday to come to this caucus, there’s potential to do more things in your day to help out.”

1 Comment on "The Battle For March: Previewing The Kansas Caucus"