While the large majority of national union endorsements have gone to Hillary Clinton this cycle, Bernie Sanders does have some very active, very visible labor groups on his side. National Nurses United was the first labor union to back Sanders. They’ve been a constant presence in Iowa since. Their red bus often shows up around the state, they’ve put up billboard ads supporting Sanders and you often see a group of red-shirted nurses at most of his events. Their members have also been working hard on the ground in Iowa in the last weeks.

Starting Line sat down with National Nurses United president Jean Ross yesterday to interview her about their work. She was at the office of Iowa Citizens for Community Improvement, where she and other members were making calls for Sanders. The following has been edited slightly for clarity and brevity.

What are some of the activities you’ve done in Iowa to help out Sanders?

I myself, as well as some of my nurse friends, neighbors and relatives come across the border [from Minnesota] every weekend and phone bank and canvass door-to-door for Bernie. We’re also just encouraging people to talk to one another about why we think it’s so important to have Bernie as a president. 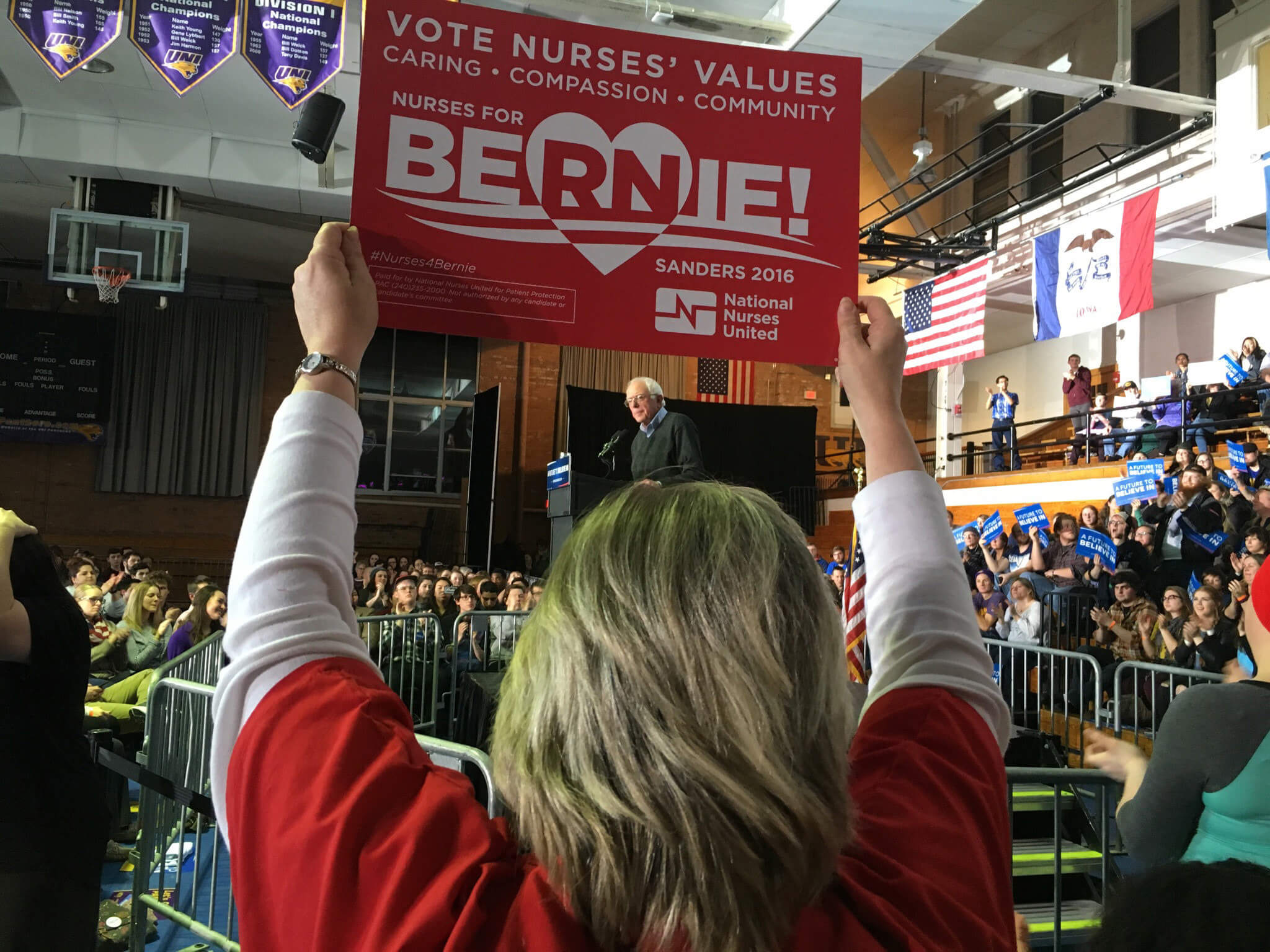 What was the main motivating factor to endorse Sanders?

It was easy for us to endorse him. We have our values: caring, compassion and community. And Bernie Sanders typifies, he embodies that for us. We know from our his history with him what he can do. He’s supported us in legislation that we know is really important. We have a “Main Street Campaign For Healing America,” so we look at the public as our patients, because they are. So if we’re looking out for public health we need real, bold policies that are going to change things back to the America we were promised.

We can see from our patients and family members how things have changed over the years. I’m not a young, new nurse anymore, and I will tell you that the kind of things that are occurring to our patients and their families now just shouldn’t be happening on the wealthiest country on earth.

The incidence of asthma in children, for example. Anxiety and stress on your mental health, we’re seeing on younger and younger children. If you talk to them, they’re worried about mommy and daddy losing their job. When I was little, that didn’t occur to me. They shouldn’t have to. That puts a lot of stress on little kids, and it doesn’t need to be. Not to even mention that if you’re an adult it’s very stressful too. So we find younger and younger people ending up with high blood pressure and stress-related disorders, a lot of gut problems, and stress will add to any tendencies for gut issues.

We didn’t see as many people without insurance. Even with the ACA – which we were very careful not to criticize it even though we never wavered form Medicare-for-all – it did insure more people. But we said from the beginning that our interest is not in insuring more individuals, our interest is in getting everyone care. Quality care.

How do you think Sanders’ Medicare-for-all or single payer system and how you think that can improve healthcare for everyone?

You just have to look at any country that’s got it, and you can see. Top on our list is to have care, and this is a system that will do that. There’s a reason you call it Medicare-for-all. People are comfortable with Medicare. If you remember the Tea Partiers who stood with the big signs of “Hate government, but don’t you touch my Medicare.” So we all laughed, those of us who understand that it is a government program. But people trust it, they like it, and it works.

So why can’t you have that for everybody? We started with 65. It was always meant to be improved upon, just like Social Security. Now is the time to do it, it can be done. And there is a will among the American people to do this. We know that. Even before Bernie we were going across the country talking to people. People like the idea of Medicare-for-all. I have been in front of some groups that were rather pro-Republican, I have been in front of groups that were pro-other candidates. Whenever I talk Medicare-for-all, big applause.

It can be financed. Bernie has a way to finance it. He’s been with us on Robin Hood tax, the Wall Street tax, that can bring in a lot of money for all of the issues we care about to make society well. What are some of the stories you’ve heard from Iowans here on the ground?

A lot of them are already Bernie supporters, “feeling the Bern,” they love the hashtag “feeling the Bern.” We jokingly say, yeah we’re nurses, we work in the burn unit right now, that’s where I work. I am amazed at the number of people who say they voted Republican their whole life. This year they are going to go caucus and register as a Democrat just so they can vote for Bernie. And they mention the things that I think are meat and potato issues. Jobs, a real plan that invests money into our crumbling infrastructure. These are not pie-in-sky ideas. We have done this before, and we can do this again.

You are one of three national unions that have endorsed Sanders, the first one in fact. Are you surprised more didn’t endorse him?

Not really. I would love to say that I’m surprised, but different unions have different ways of doing things. I think even for those of us in unions there is a disagreement on what really works in this country for getting folks elected that will really do us good. In our union we have already believed in movement politics. We know it’s the only thing that ever worked for the American people. If you get the buy-in of people who believe as you do, and for us it’s quite simple too – we’re always looking out for the good of the public. So we get a lot of support.

There’s a reason the bus says “the most trusted profession trusts Bernie.” There’s a reason. We’re with them 24/7, they trust us. That’s good, they should, we are looking out for their welfare.

I think some unions have bought into the status quo, the establishment, and you got to stick to a party and the candidate’s that being pushed by a party. Bernie believes in movement politics. He knows it will take a revolution, we do too. We’ve been trying to move one for some time.

Some groups have criticized Sanders for having a Super PAC supporting him. Describe a little more about the Super PAC that Nurses United has.

We of course don’t call it that because it’s so different. Some people can give unlimited sums of money and have it be nothing. To me, if I could write out a $1,000 check, it wouldn’t be for a campaign I believe in, like Bernie. We just don’t have it. But I think it’s so impressive to us that our nurses recognize the value of things we believe in, and the candidate like Bernie is one of them. So you take small donations, and I mean small. Sometimes they give five, twenty-five, sometimes they give it monthly, sometimes it’s a one-time donation. But they know what they’re putting their money toward. Things they believe in.

To me they’re two very, very different things. If they want to call it that because there’s a definition, which I guess there is politically, go ahead and call it that. But I see Wall Street bankers and the very wealthy far differently than I see working nurses. Where have most of the volunteers from Nurses United come in from? Where do you have members at?

It depends. Right now for Iowa, it’s Minnesota, Illinois, Missouri. In Nevada, it’s California members helping. We’ve got members in Texas, Florida who actually are phoning into citizens from Iowa. We recognize this is the first caucus and it’s really, really important. We have members in Iowa too. We have Spencer, Council Bluffs and Marshalltown, and the VA in Des Moines.

How do you think caucus night will turn out for Sanders?

I just think that people have underestimated Bernie Sanders from the get-go, and then made fun of him and us. He’s been attacked, especially for Medicare-for-all. Which, by the way, is not a good practice because that means you attack us. Shouldn’t do that. I think people should just listen to the message, people who don’t already get it. He’s serious, and we’re very serious, and we’ll get our people out for that caucus, which is what we’re working for and determined to do, he’s going to win.