Campaign staffers around the state rose bright and early this morning to finish up final preparations for the launch of GOTC (Get Out The Caucus). Normally called GOTV in most elections (Get Out The Vote), the final four day stretch leading up to the Iowa Caucus is filled with non-stop activity in field offices in major cities and small regional towns. Volunteers stream in to pick up walk packets or make calls, usually during shifts starting at 9:00, noon, 3:00 and 6:00. Well, on the Democrats’ campaigns side at least.

For the most part, efforts to persuade caucus-goers are largely over. If staff and volunteers find undecideds at the doors or on the phones, they certainly try to persuade them, but the focus now is ensuring the people you’ve already identified as supporters turn out. That means knocking on their doors, even in the most rural of precincts, and calling through lists of supporters. The scripts used ask people how they plan on getting to the caucus, as a way of making the voter think about whether they have childcare or transportation lined up.

Starting Line bounced around the Des Monies metro today to bring you some scenes from each of the Democrats’ campaigns, as well as a stop by Citizens for Community Improvement, where they and Nurses United were organizing for Sanders

A brightly-decorated Clinton field office in a strip mall in Waukee was manned by two Clinton staffers early this morning. Michael Kimmelman, a field organizer who has covered Dallas County since the very first wave of staff in April, chatted with volunteers as they came in about Clinton’s recent appearance on Wednesday at a local bowling alley. 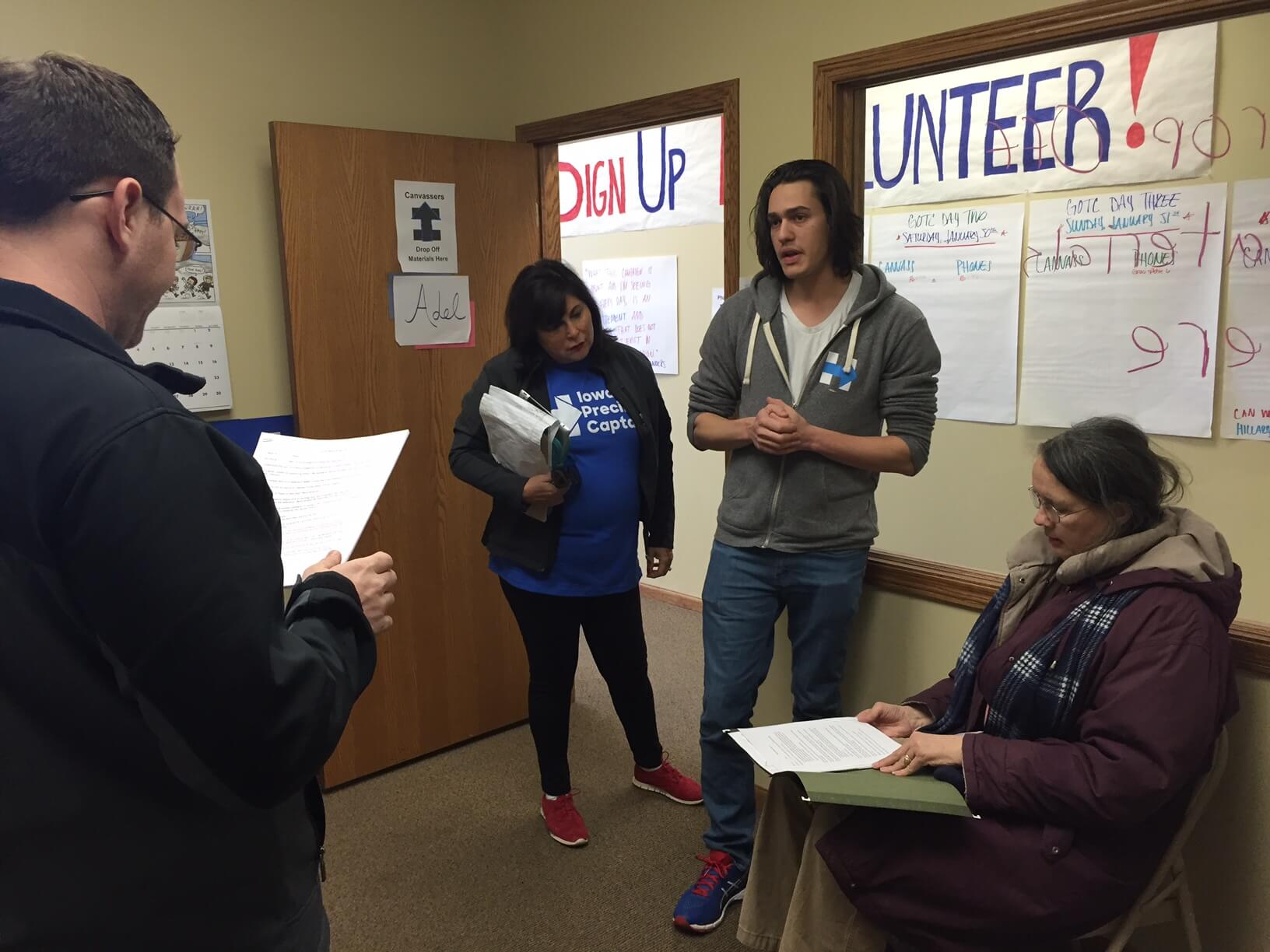 Eight volunteers arrived to the office to split up calling and canvassing duties, most of which were experienced volunteers. Kimmelman trained several for a few minutes on the new GOTC script, encouraging them to emphasize to voters being on time and to make it sound like a fun and very important experience. 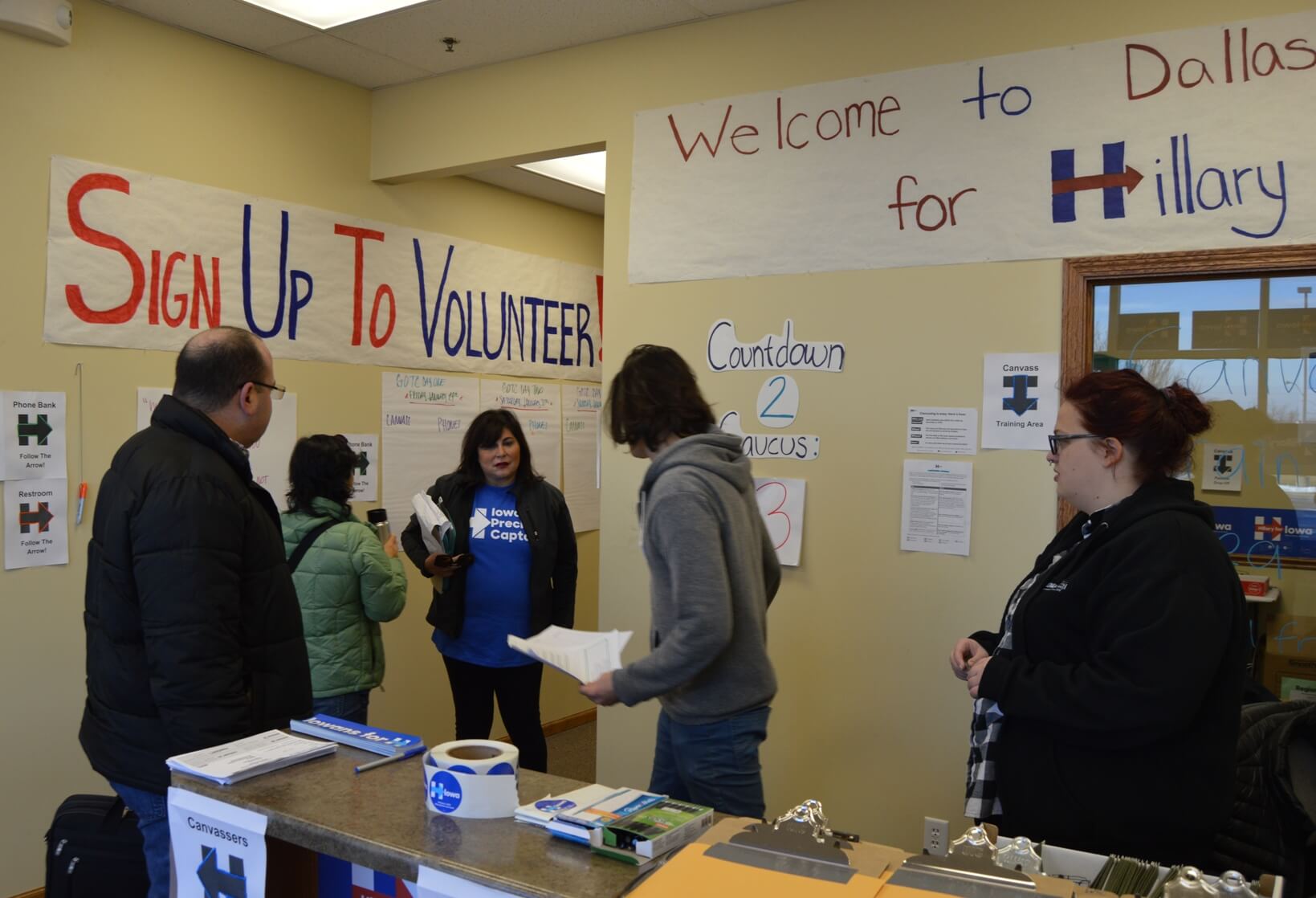 Sanders’ campaign headquarters in Des Moines was sending volunteers out and bringing others back in from the first shift around the noontime hour. Several groups of phone callers huddled around round tables, and some college students were cutting out fliers. Close to ten reporters were there to get b-roll of volunteers and conduct interviews, including journalists from two European outlets, a sign the media sees Sanders as a potential upset winner here. 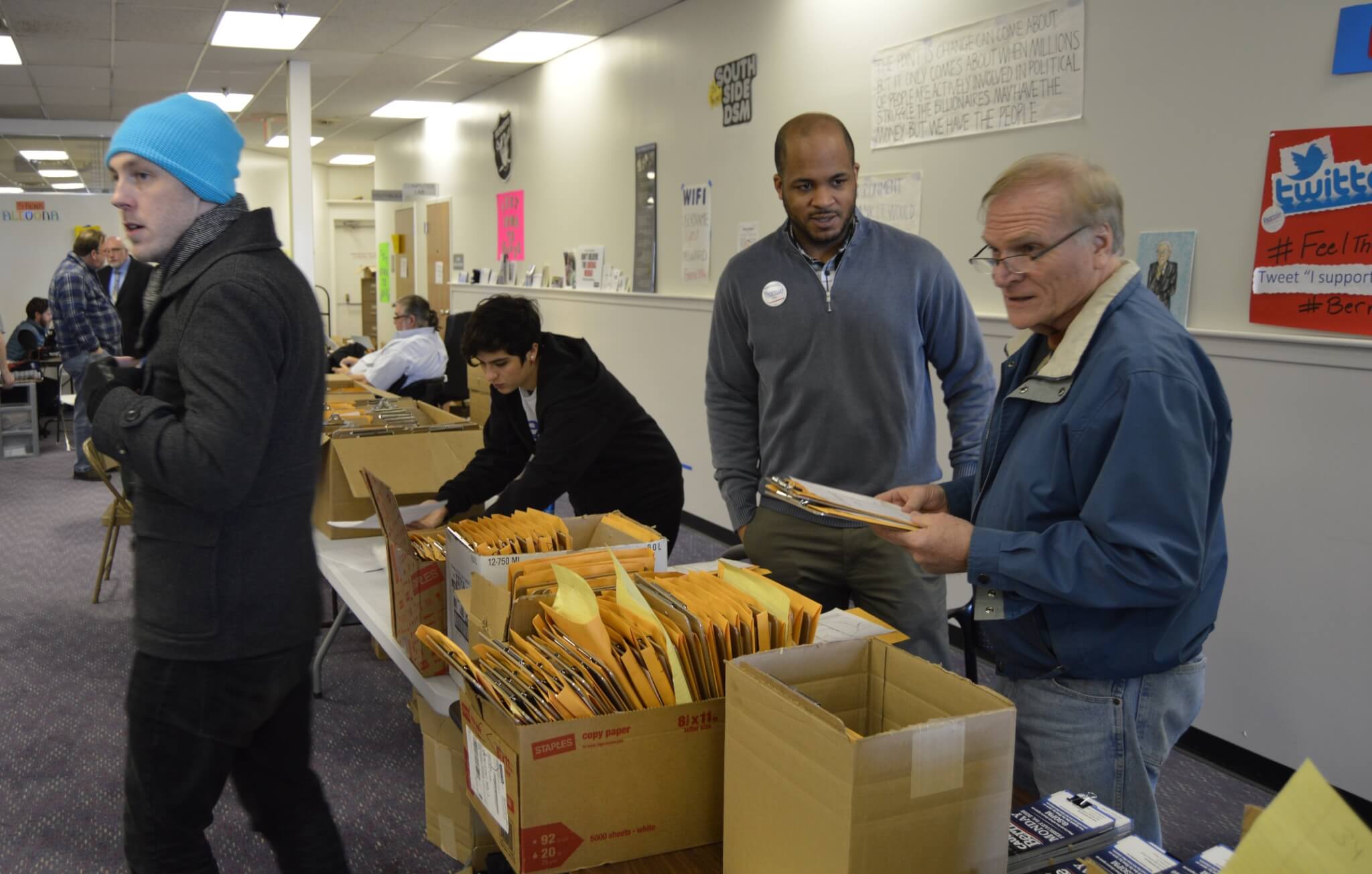 Two women who hadn’t met each other before were paired up by a local organizer to head out to the doors. They were joined by one other companion – one of the women’s dogs, who was dressed appropriately in a Bernie shirt. Also decked out in Bernie attire was local Des Moines activist Max Knauer, working the phones at a table, wearing Raygun’s “Feel the Bern” shirt that sports hundreds of images of Sanders’ face. 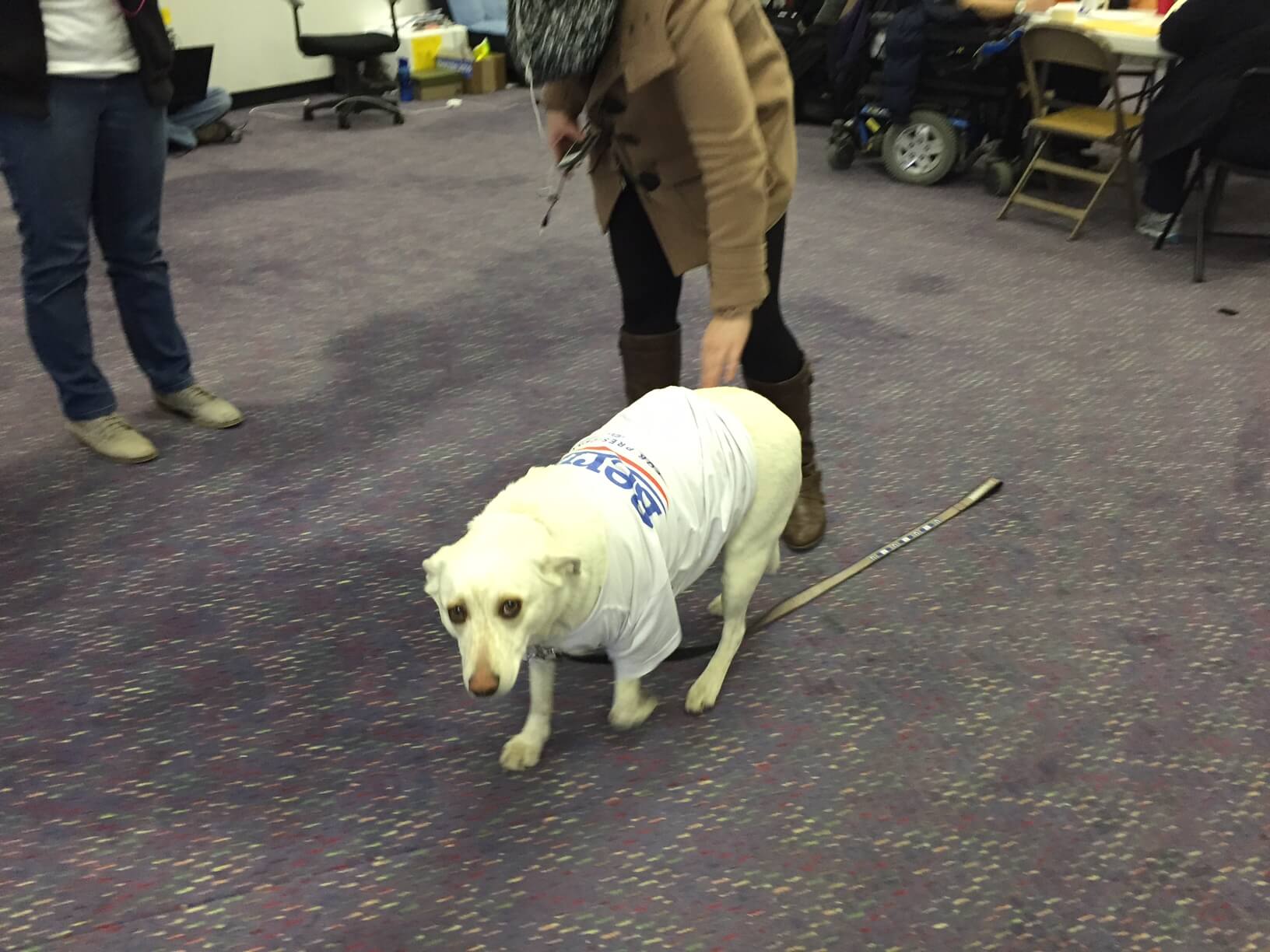 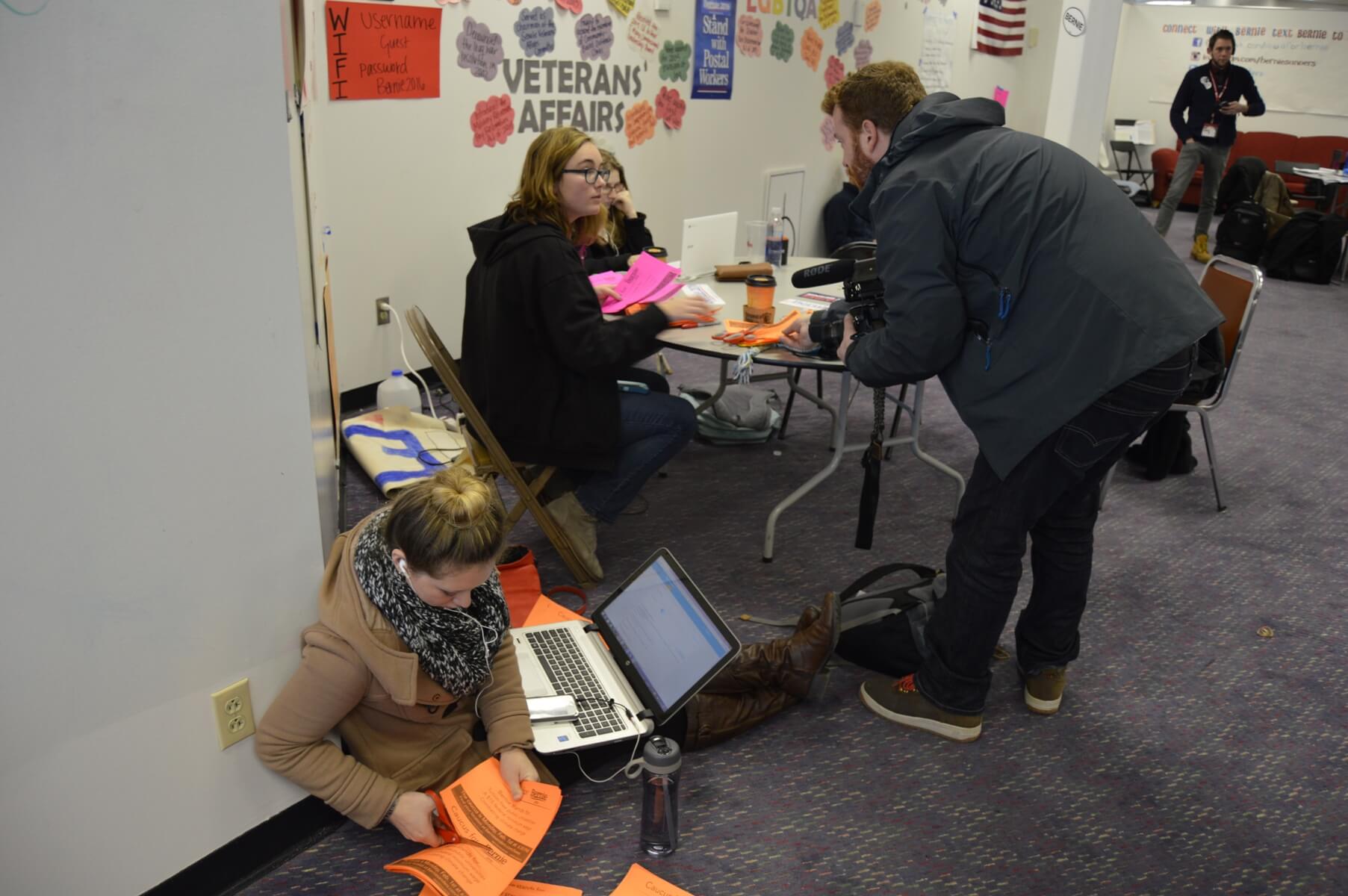 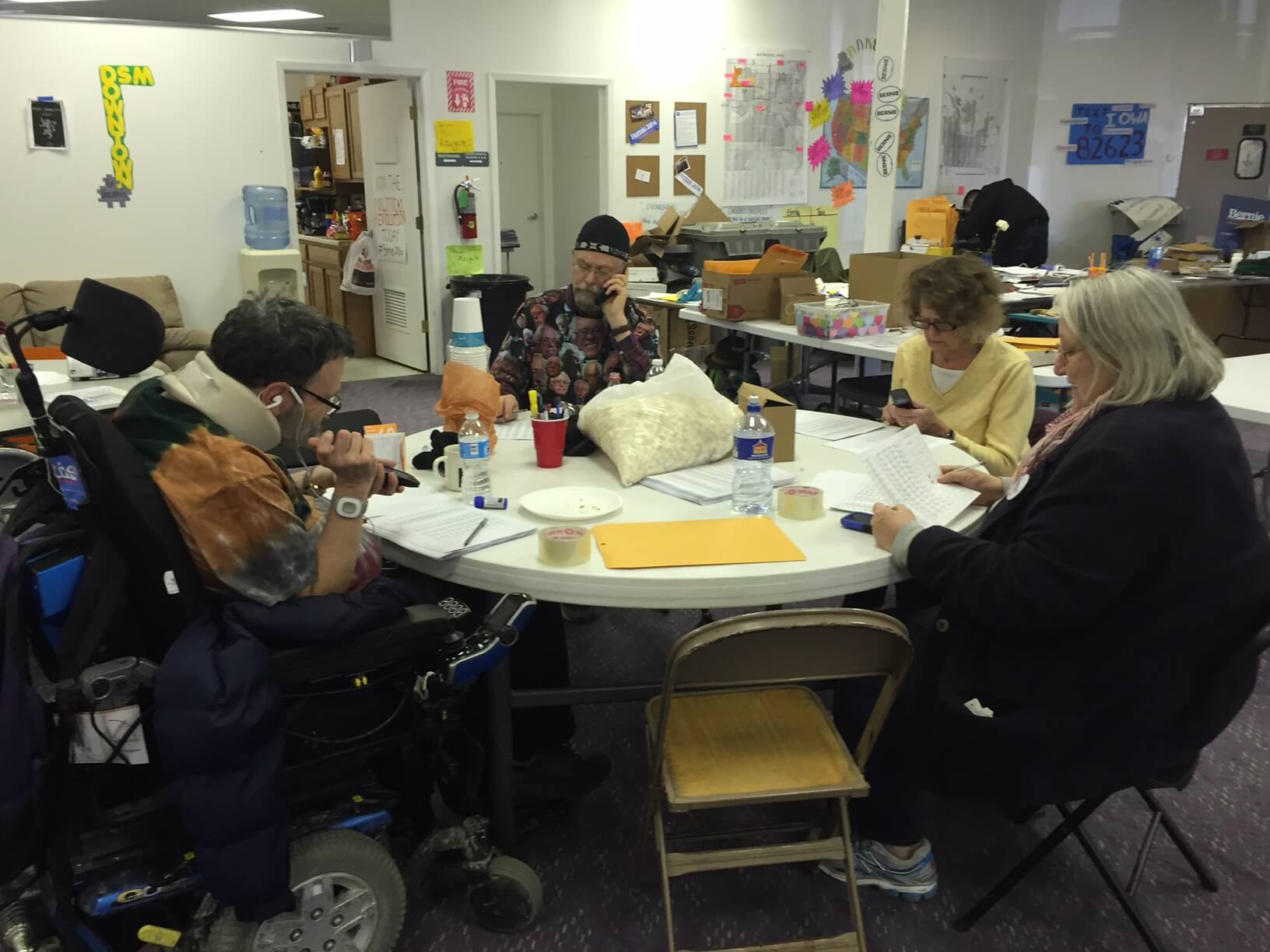 The progressive organizing group of CCI was hard at work on Friday, making calls in their office for their endorsed candidate of Bernie Sanders. They instructed their volunteers to ask what issues people care about, to make a more personal appeal in their calls, but to move on if the voter is committed to Clinton. 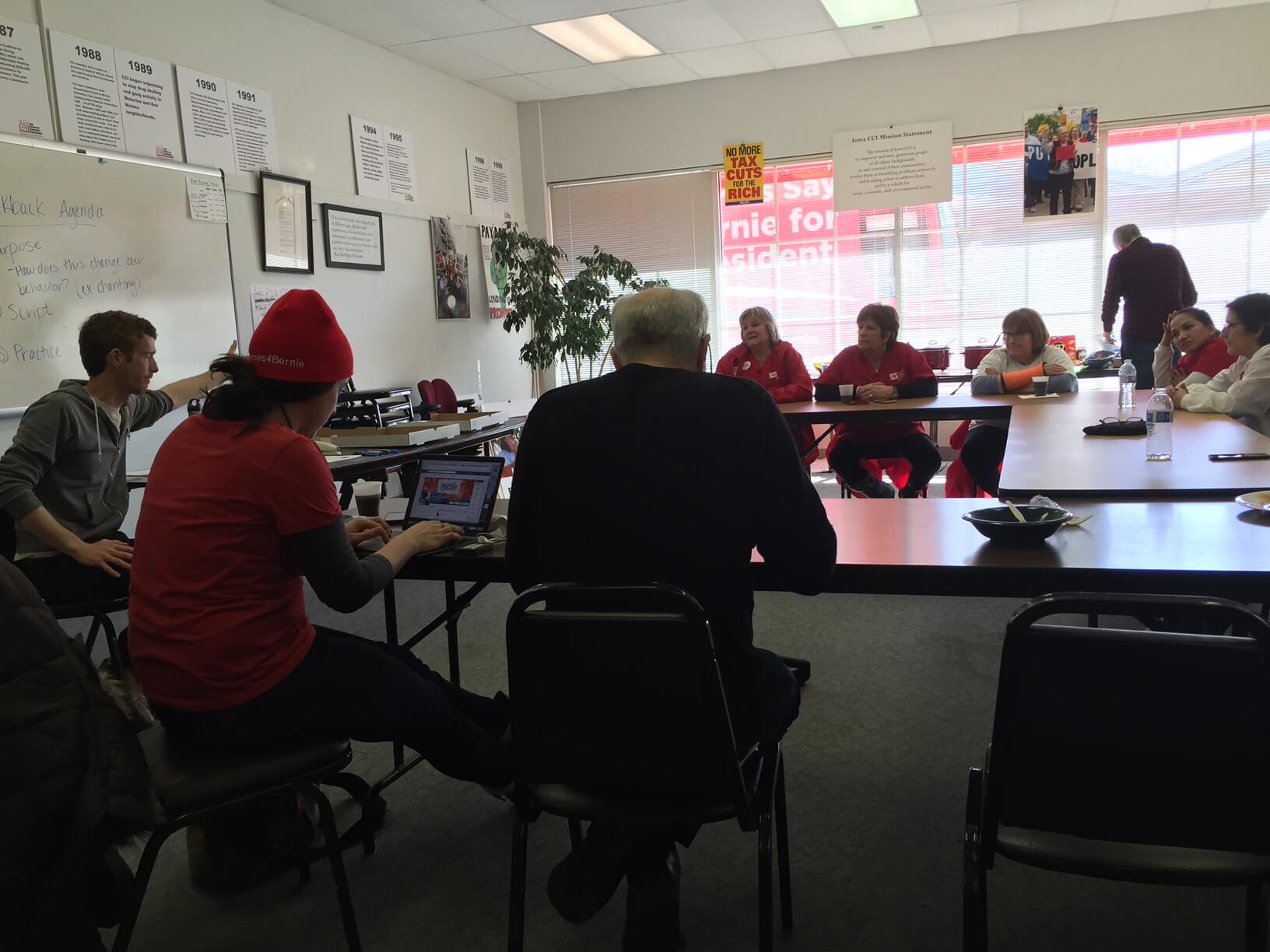 Also in the building was several of the top leadership from Nurses United, the union backing Sanders. Parked outside was the “Bernie Bus,” the red vehicle the nurses have traveled down to Iowa from Minnesota on often. Starting Line interviewed their national president, and you can check back tomorrow for that story on how Sanders’ healthcare plan motivates their members.

O’Malley’s downtown headquarters was the busiest stop of the day (though you do typically get more volunteers in the afternoon), with Des Moines field organizer Jordan Sabine instructing a large group of volunteers on their final caucus script for voters. The afternoon canvassing shift was being spearheaded by O’Malley’s three children, Grace, Tara and Will. Will had just come from an interview on MSNBC, where he told the host his father was going to hit Trump “like a freight train” in November. 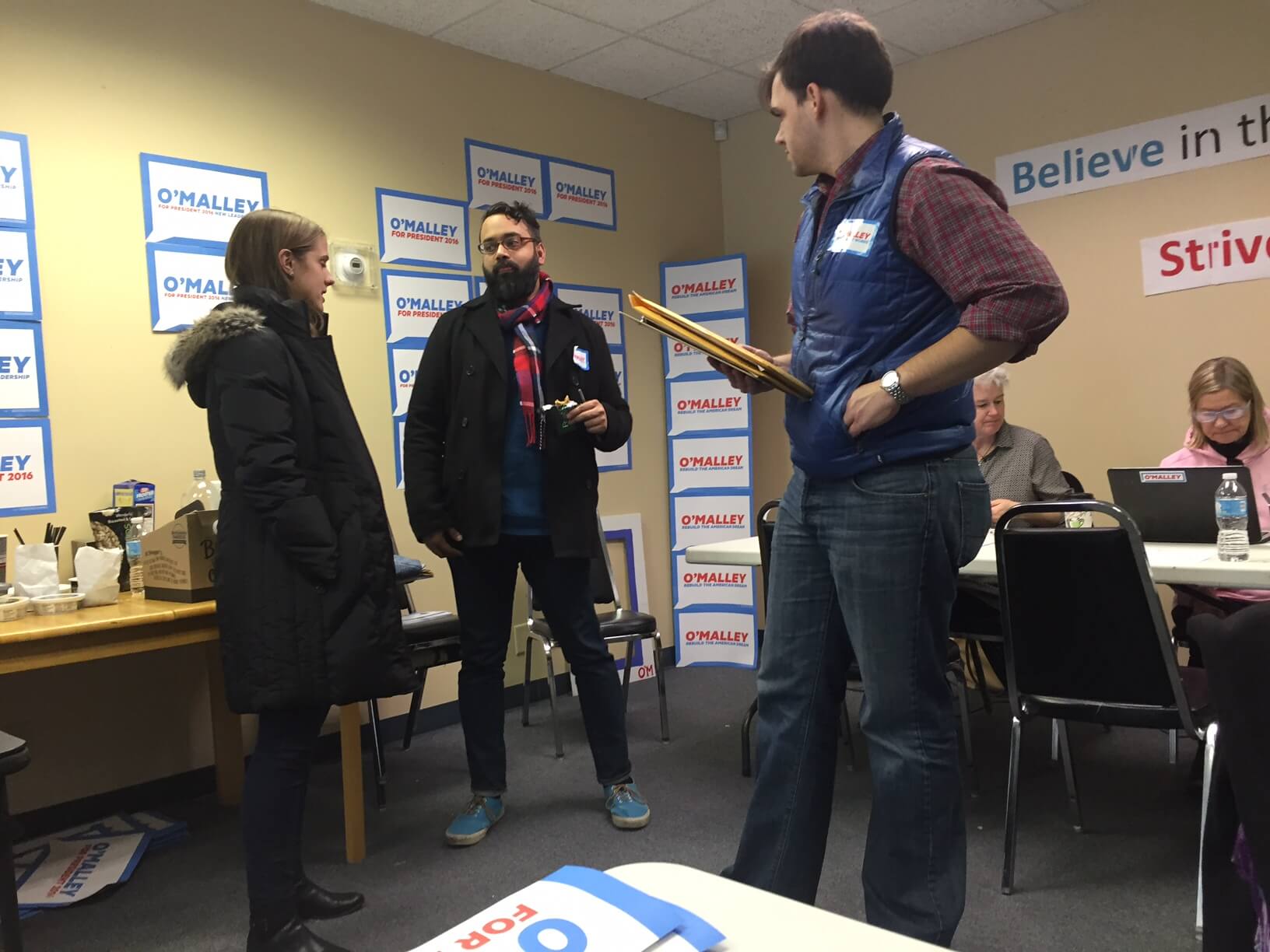 “I feel really good, and some people may call me crazy, but I’ve seen a lot of momentum here in the last few days, especially among Latino activists,” Will O’Malley told Starting Line. “We’ve been seeing a windfall of support coming from people who are undecided. Even people who committed to precinct captains for Bernie or Hillary back in July, I’ve gotten them on board the last few days.” 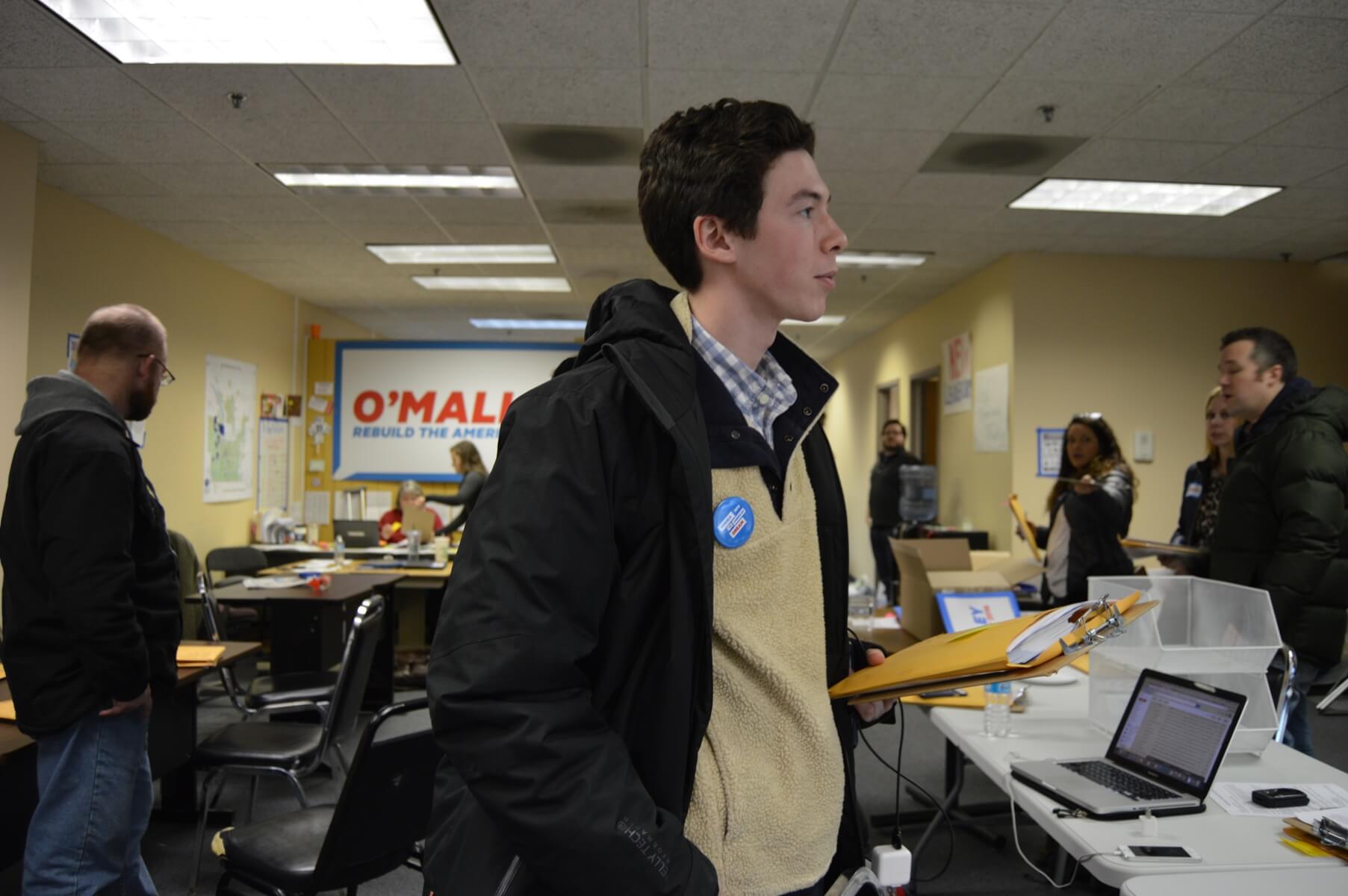 “There’s a lot of people coming out of the woodwork, and I think we’re going to really surprise people in some key precincts,” he added. “We have our caucus math ready to go, and I think February 1st is going to be a really good night.” 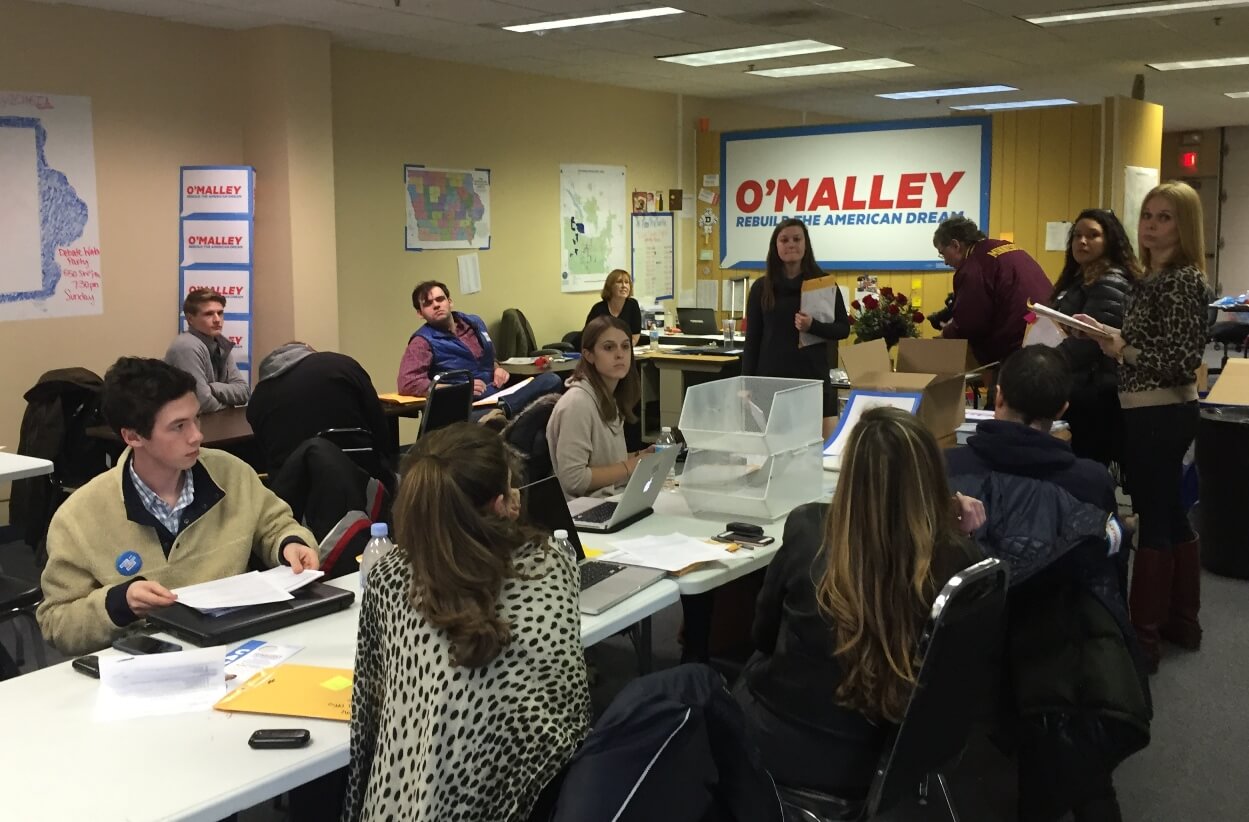 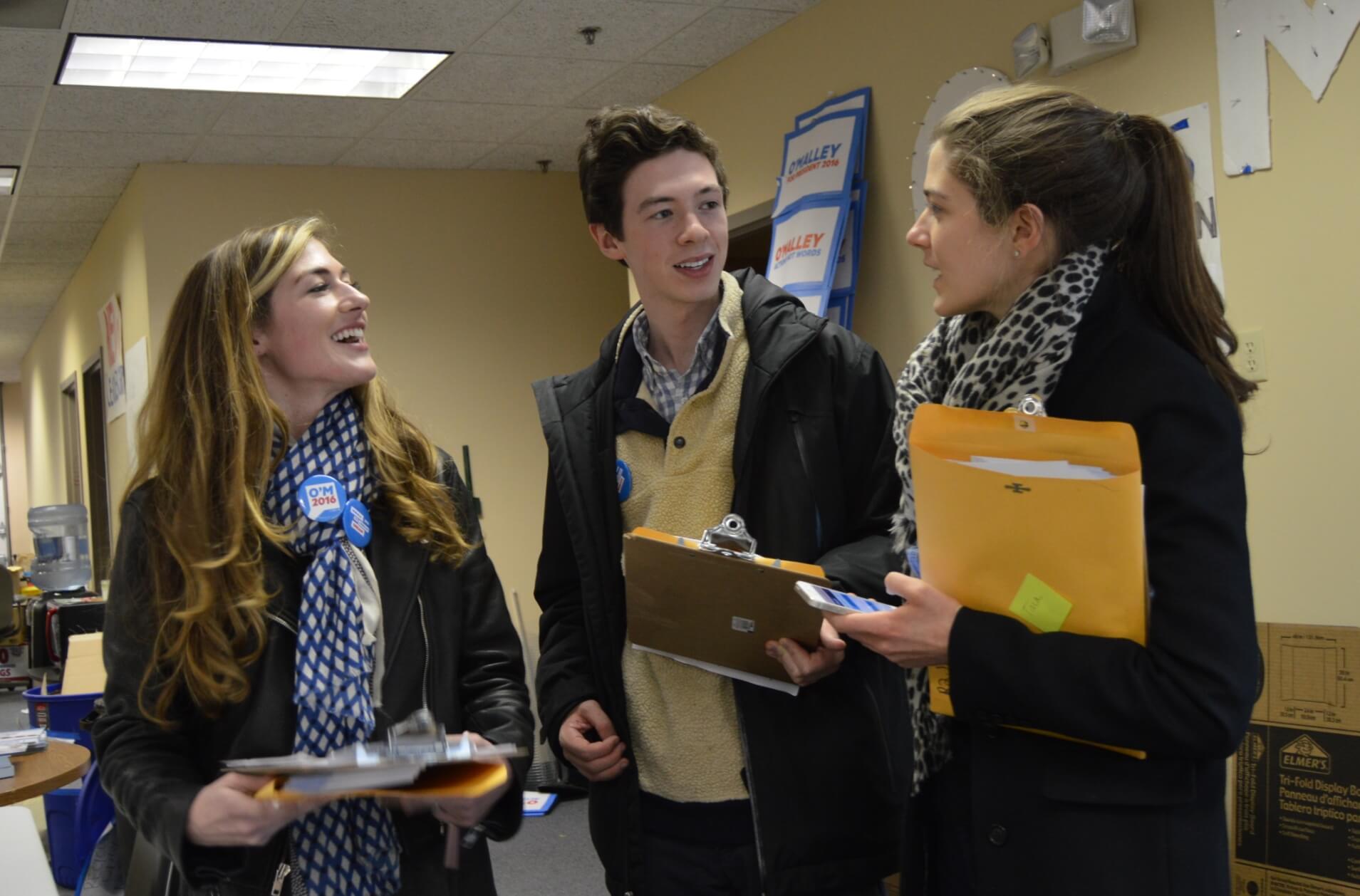