Democrats around the country warned what would happen if Republicans took over the U.S. Senate in 2014, allowing Iowa’s Chuck Grassley to take over the reigns of the Senate Judiciary Committee. Most of the worst predictions have come true as Grassley and Republican Senate leadership have led a historic effort of obstruction to cripple the effectiveness of the nation’s court system by bringing judicial nomination votes by the full Senate to a standstill.

Since Republicans gained the majority in 2015, judicial nomination confirmations have slowed to historic lows. A mere 11 nominees were confirmed by the Senate this year. The last time it was that few was 1953. Worse still, vacancies have skyrocketed from 43 to 70 at the start of this year. And the number of “judicial emergencies,” situations in which judges are tasked with overwhelming case loads, has more than doubled.

Grassley’s response? Mostly a shrug of the shoulders.

Republicans’ goal throughout has essentially been to stymie President Barack Obama’s administration in any way it can, even if that means damaging the nation’s court system. The long-term goal is to put off as many nominations as possible in the hopes a Republican follows Obama in the White House so they could get more friendly judges then. But even still, Republicans are blocking people even nominated and supported by fellow Republicans simply to jam up the process. In fact, the Senate adjourned without holding a vote on 19 nominees, all of whom were vetted and ready to go, and who weren’t even controversial.

The Alliance For Justice, which Bleeding Heartland covered in this post, called 2015 the “single worst year for judicial confirmations in over a half century.” They drew up some graphs to demonstrate how unbalanced the confirmation process has become recently under Grassley and the Republicans: 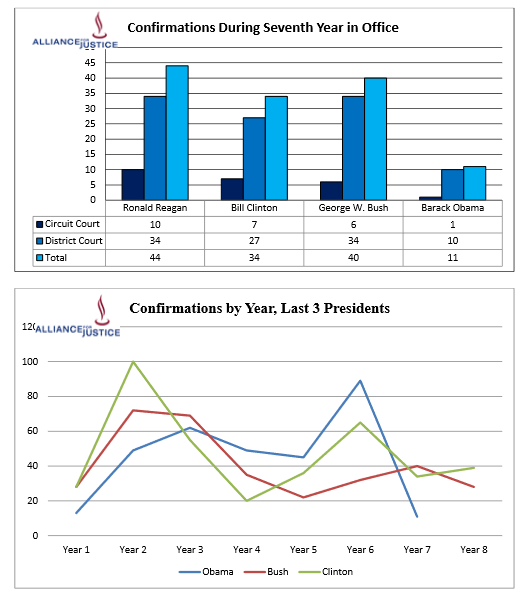 Some nominees did find themselves in a fast-track situation: two Iowans. Thanks to Grassley’s intervention, Leonard Strand and Rebecca Ebinger, will skip ahead in line to be voted on soon. Ebinger’s slot in Iowa’s Southern District isn’t even a judiciary emergency, unlike many of the others yet to receive votes on.

So why do they get preferential treatment while countless others hang in limbo?

“Because I’m chairman of the committee,” Grassley said, as reported by the Omaha World Herald.

Bruce Braley’s infamous moment during his Senate campaign came when he warned a group of Texas attorneys that Grassley, a “farmer from Iowa who never went to law school,” would become chair of the Judiciary Committee if Republicans won Braley’s race. It may have not have been the most artful way to phrase it, in part because you shouldn’t even need a law degree to understand that bringing the courts to a grinding halt is wrong. But it turns out Braley’s bigger message of Grassley using his position for extremely partisan purposes was absolutely correct.

Grassley likes to portray himself to the people of Iowa as a friendly, grandfatherly neighbor-type who’s just in D.C. to make Iowans’ voices heard in the Senate. But his track record last year as head of the Judiciary Committee shows he’s happy to play a key role in the needless and cynical partisan obstruction that Washington D.C. has gotten so good at.