Usually when a campaign puts together a memo for their top donors you try to highlight your accomplishments and project momentum. Perhaps that’s what Jeb Bush’s top advisers thought they were doing with the internal campaign briefing that got leaked to U.S. News and World Report yesterday, but even a brief look at their Iowa numbers show extremely troubling signs for Bush’s viability in the the caucus.

The most jarring number is their amount of identified supporters. Bush hopes to garner about 18% in the Iowa Caucus, which their projections show requires a vote goal of 23,716. So far they have ID’d a mere 1,281 of that goal (or 5.4% of their vote goal). And we’re three months out.

Those supporters were presumably found through the 70,381 calls they’ve completed. Guessing the contact rate for a Republican caucus campaign might be a little tricky depending on what universe they’re hitting, but let’s say it’s 25%. So of the 70,381 calls they’ve made, that would have gotten them 17,595 conversations, meaning only 7% of the people they speak with turn out to be Bush supporters. Those have to be some tough phone banks to get through every night.

The other metrics they chose to show off to their donors and leadership team look weak as well. They’ve recruited only 129 precinct leaders/captains at this point. There are 1,682 precincts in Iowa. 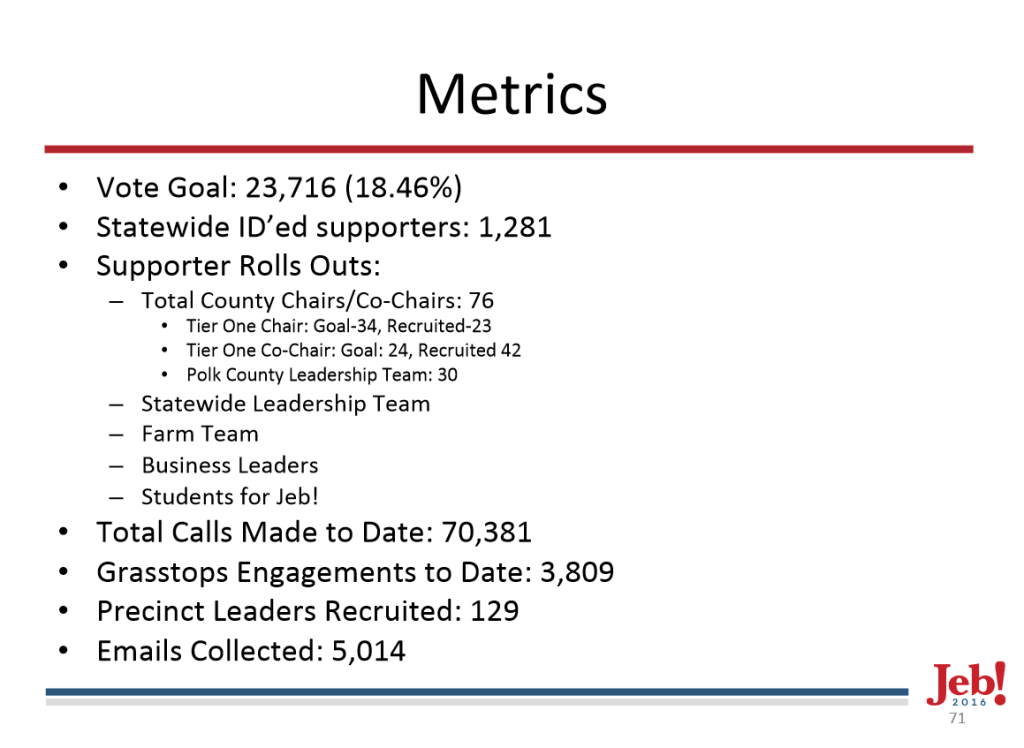 “A ‘major’ presidential candidate, 95 days out from the Iowa caucuses has only collected 5,000 Iowa email addresses and only 129 precinct captains?” questioned Norm Sterzenbach, who ran the caucus operation for the Iowa Democratic Party in 2008, upon seeing the Bush memo. “And only a total of 1,281 supporters out of the 23k they project they need? There is no way he succeeds, he doesn’t have the message, the national narrative or the Iowa organization to be any kind of real factor in this race. ”

Bush has one of the larger Republican staffs in Iowa, but that’s not saying much. While all three Democratic campaigns employ very large field teams, ten people make up Bush’s entire Iowa Caucus operation. That includes a Hispanic engagement staff and a faith outreach staff, according to the leaked memo. What they’ve been able to accomplish isn’t encouraging.

The contact tracking spreadsheet should never have seen the light of day, much less a donor meeting, if this is truly what they’re achieving on the ground. 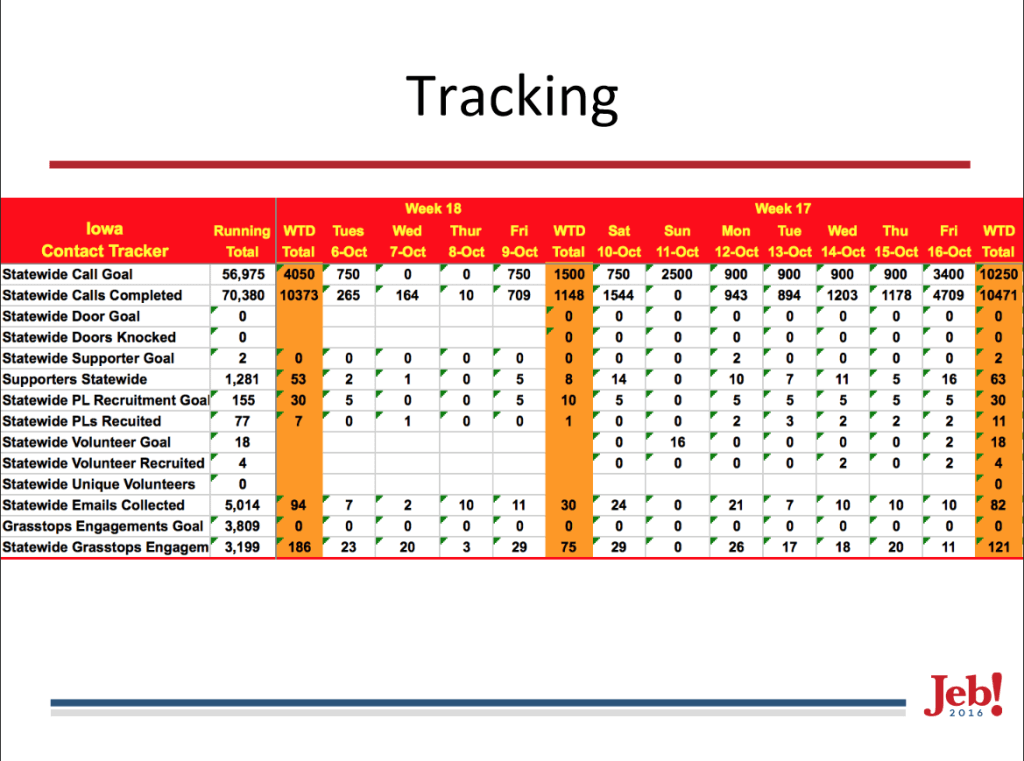 For one, they apparently haven’t knocked a single door throughout the course of the campaign. Why even include that on the list? I’m going to guess the volunteer section just wasn’t completely filled out here, as I’ve seen tweets from their offices with volunteers on the phones. But it’s still odd they only list a volunteer goal of 18 for a single week… and then note they recruited only 4 in that same week. Actually, multiple parts of this spreadsheet seem incomplete. (Update 2:15 – that suspicion was correct. A Bush campaign official tells Trip Gabriel of the New York Times that they track volunteers in a separate database, and actually have 123 volunteers statewide. Read Trip’s piece for more info).

Again, the ID’d supporters total here is distressing. In a full week they only found 63 new supporters? If you project that over the 15 weeks in the caucus that follow this reporting time period, that would only be 945 more supporters by caucus night, getting them a little over 2,000 statewide. And they say they need 23,716 (now, you never need to ID every single person, but you do need more than this).

If we guess a contact rate of 25% here as well, their supporter percentage has gotten even worse. Only about 2% of the people they get in touch with are committing for Bush.

Other oddities present themselves. Like Bush’s region map for their field staff, possibly the most bizarre way I’ve seen Iowa broken up before: 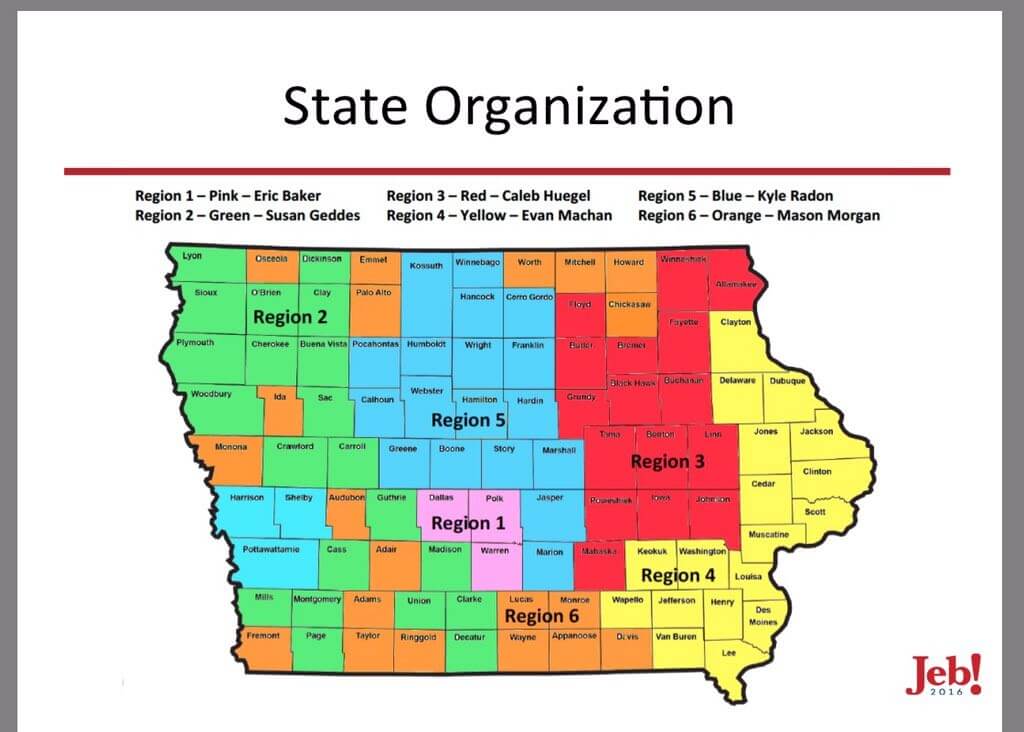 What on earth is going on here? This whole organization of counties makes no sense. I guess Region 6 is some sort of rural organizer, covering the least populated counties? But even then, why assign one person to such disparate counties with low vote totals when one other organizer covers Cedar Rapids, Cedar Falls/Waterloo and Iowa City on their own? And why the hell does Region 5 inexplicably cover Council Bluffs and two other Western Iowa counties when it’s primarily a Ames/Mason City/Fort Dodge turf? Why isn’t Region 2 just all of Western Iowa?

If you read through the entire memo, it’s clear that the Bush people think they’re doing great in what appears to matter most to them: endorsements. Slide after slide highlights the number of governors and members of Congress that have publicly backed Bush, comparing them with the comparably small amount his competitors have. But you don’t even have to be a former caucus or Iowa campaign staffer to realize how troubling their internal Iowa metrics look.

Look, I know several of the folks working or advising Jeb Bush’s Iowa Caucus operation, and they’re some of the best in the state. I have no doubt they are working very long hours for their candidate. But some of the strategic leadership and, most importantly, the candidate himself is simply not getting it done.

Unless something changes drastically, there is simply no way Bush comes away from caucus night with anything other than a devastating embarrassment.