Bernie Sanders may not be appearing at any Labor Day events in Iowa today like Hillary Clinton and Martin O’Malley are, but his presence will certainly be felt after winning over many union members with a campaign stop three days ago. At an informational picketing demonstration outside of Penford Products in Cedar Rapids on Friday, Sanders stood shoulder-to-shoulder with the BCTGM 100G local as they protested an impasse in contract negotiations.

The local workers’ contract expired on August 1st, and they’ve faced frustration with management that refuses to negotiate in person with the union. Complicating matters is that the plant was bought out recently by Ingredion, a multi-billion dollar international corporation that quickly took to finding ways to cut costs at their new acquisition.

“This contract has been in effect for over sixty years,” said Matthew Maas, the vice president of 100G, which had about 160 members until some early retirements before the contract change. “We want them to recognize that and respect the employees. Respect them as far as working conditions, work hours and work rules … We’re willing to sit down and negotiate. Unfortunately the company is not willing to do that as well.”

The first offer made by the company was rejected by 95% of the local’s members. After a short meeting with the union, management took 25 hours to come back with another, last/final offer that was largely the same. That left the workers frustrated and looking for other ways to bring pressure on the company to sit down at a real negotiation table.

Enter Sanders. The Cedar Rapids labor community has encouraged the presidential candidates to take an interest in their situation, and Sanders was more than happy to enter the fray. He arrived to the picket Friday afternoon and joined about 150 union members and their supporters, immediately taking a sign and leading the group in a march outside the plant (he seemed rather enthused about it too, walking so fast he outpaced many of the picketers). Under a small awning in the park, Sanders blasted the corporation, first on a microphone and then, when it gave out, he took to a bullhorn.

“I’ve got a statement for Ingredion,” Sanders bellowed to the crowd. “And that is when you sit down and you negotiate it’s not a take it or leave it proposition. You can’t get it all! … I am here today to strongly urge the leadership of Ingredion and Eileen Gordon to sit down at the negotiating table and to negotiate in a serious way.”

“What we are all saying – we are sick and tired of the war against working families!” Sanders continued, as workers currently on shift at the plant stood outside a door and watched from across the street through a chain link fence. “Being out on a picket line and standing with workers is something that I have been doing for my entire life. This is what I do”

Sanders speech was particularly intriguing for how specific he got into the local dispute. He called out their CEO by name, criticized the $7 million salary and $28 million guaranteed severance package she has, and addressed several of the concessions the union was looking for. 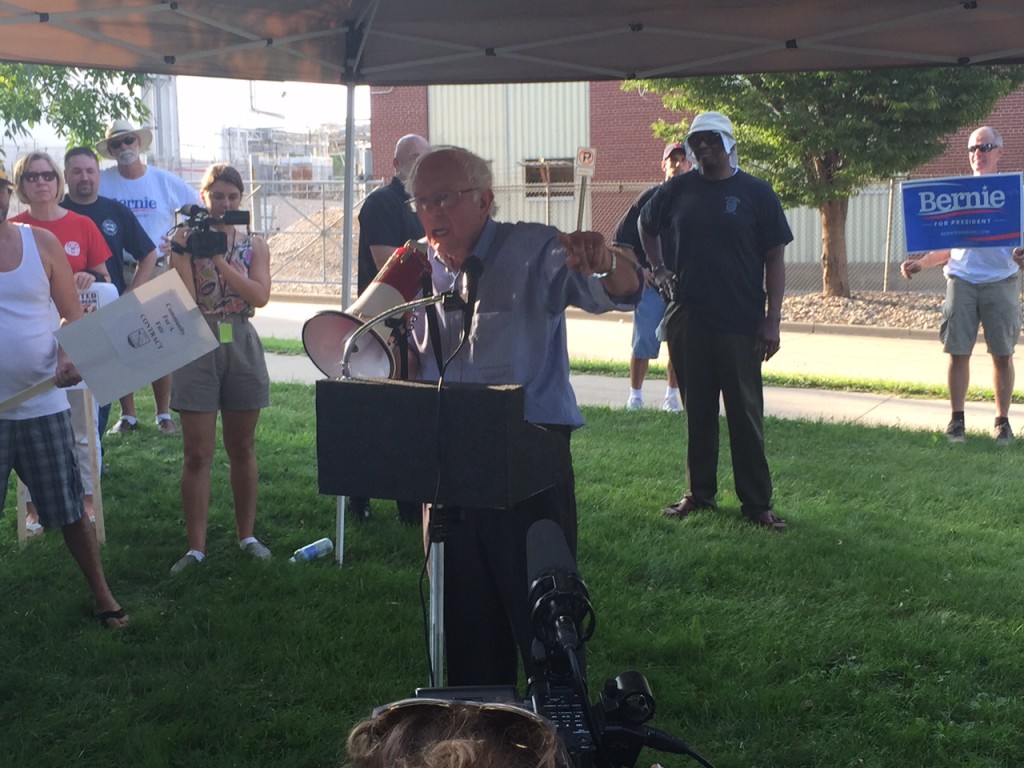 “The middle class of this country is disappearing,” he said, pointing out the Cedar Rapids dispute is the perfect example of his larger message. “It is because of corporate greed which is what we are seeing today. How much do these people need?”

The union organizers, members and picket attendees were clearly pleased with Sanders’ help.

“This is a typical situation of Wall Street versus main street, David vs Goliath, and it’s very important to have someone like Bernie Sanders standing on the picket line with these workers in order to level the playing field,” said Jesse Case of the Iowa City Federation of Labor.

“Bernie Sanders has always been there trying to equalize things between big companies and the working people,” added Maas.

“No one in the nation over the past thirty years has focused more attention on the critically important, but rarely discussed, issue of the growing gap between the rich and everyone else like Bernie Sanders has,” Rick Moyle said in introducing him.

It will be interesting to watch Sanders’ continued courting of labor, and what dividends that will bring him, especially in labor-heavy Eastern Iowa. Sanders’ coalition so far in his presidential run has come in part from college students and relatively new activists/outsiders, along with some (but less than the other campaigns) long-time local issue organizers. Adding some of the more-experienced Iowa Caucus hands from the labor movement could be key in solidifying his rise in the Iowa polls and giving him a real shot of winning on February 1st.