Over a month has passed since Donald Trump’s incendiary statements about immigrants set off a firestorm in the presidential race, but the immigration issue has found itself front and center once again this week among Republicans. And once again there seems to be desire among the Republican contenders to outdo each other, leading to some interesting commentary from conservative leaders, including one that Starting Line overheard at the State Fair.

Trump released his plan for immigration this week, which included deporting all immigrants here unlawfully (whole families included), stop birthright citizenship (a right protected in the Constitution), triple the border patrol agents, and force Mexico to pay for a border wall. Ted Cruz joined in, saying he “absolutely” supports ending birthright citizenship. And Jeb Bush, who has tried to cast himself as more moderate on the immigration issue, used the term “anchor baby,” derided by many as derogatory, during an interview on a conservative talk radio show. (Hillary Clinton shot back on Twitter, “They’re called babies.”)

The heated discussion seems to be emboldening some in the conservative movement to go even further. Popular Iowa conservative talk show radio host Jan Mickelson went so far yesterday as to suggest America essentially enslave undocumented immigrants who don’t leave. Mickelson floated the idea that “we start using compelled labor, the people who are here illegally would therefore be owned by the state and become an asset of the state rather than a liability and we start inventing jobs for them to do.”

“What’s wrong with slavery?” Mickelson asked rhetorically when pressed by a caller, though he also seemed to try to make the argument that it was wrong, and that America citizens were living in a form of slavery because of illegal immigration. However, he then doubled down on his comments, advocating for forced servitude: “Put up a tent village, we feed and water these new assets, we give them minimal shelter, minimal nutrition, and offer them the opportunity to work for the benefit of the taxpayers of the state of Iowa. All they have to do to avoid servitude is to leave.” Read the whole exchange here.

That type of rhetoric has angered many voters. Last Thursday Republican Congressman Steve King attended Mike Huckabee’s Soapbox speech at the State Fair. Afterwards, a man confronted King behind the Soapbox about Republicans’ recent comments on immigrants, specifically Donald Trump’s assertion that most were “rapists” and “drug dealers.” Starting Line happened to be standing nearby and recorded the conversation. 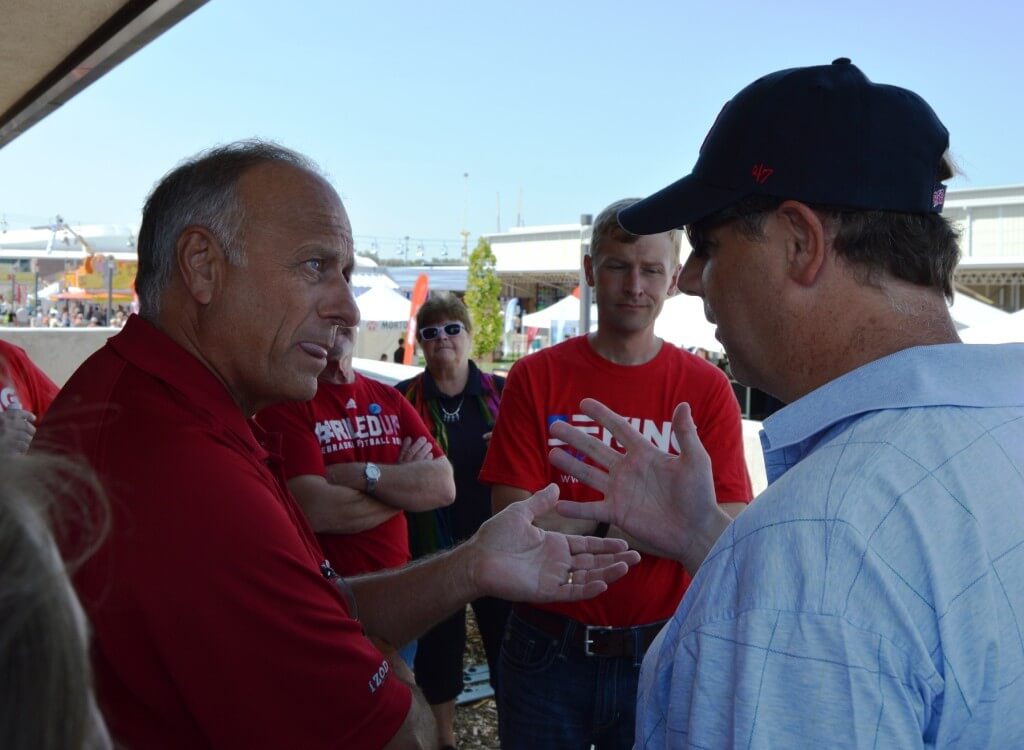 “I think that’s hateful language, and I didn’t hear many Republicans say ‘that’s hateful, that’s not what wins elections,'” the man told King, referring to Trump’s comments from his campaign launch.

“He said they’re not sending you, they’re sending criminals, rapists and drug smugglers,” King replied. “And he said ‘some of them I assume are good people.’ Well, statistically we know that the crime rate down there is many times greater than in the United States. And far worse south of Mexico.”

“Truthfully, the violent crime rate is much higher south of Mexico than Mexico itself,” King continued. “Mexico has a [the audio cuts out, but he was talking about their violent crime rate], we’re at 6.2 violent deaths per 100,000, they’re [Mexico] about 18.4, so they’re about 3 times the amount of violent death rate than the United States, and as you go south, those numbers are about 74 per 100,000 compared to our 6.2. So when you think about that, it’s ten/eleven times greater violent death rate in El Salvador or Honduras or Guatemala, and they’re sending their young men here. 80% are young men.” (Those violent death numbers match up roughly with the figures from this website, though it’s notable that only Guatemala is as high as 74.9 violent deaths per 100,000, while the other Central America countries are much less.)

King went on to point out that the majority of the unaccompanied juveniles coming in are between 15 and 18 years old. “So they’re prime gang recruitment-age people,” King said. “If you were going to sit down and had a diabolical equation then you might want to go someplace where I can bring the universal population that’s most likely to be drug smugglers, criminals, murderers and gang members, that’s where you would go and do just that. Those are the facts. So how do you say that in a nice way?”

Some might suggest that there’s plenty of nicer ways to refer to young, frightened children fleeing a poor, violence-stricken homeland than to immediately suggest they’re all going to be a bunch of gang-bangers. Indeed, many immigrant rights activists worry what type of message it sends when politicians only speak of immigrants in terms of framing them as criminals. And as I wrote earlier, this rhetoric has real impacts in America. The man questioning King pushed back on such terminology.

“Well, they’re illegal aliens and that’s the legal terminology and it’s been with us for decades,” King quickly replied, cutting in as the man continued. “It’s not pejorative … Well, they actually are documented, do you know this? They are documented. They have your documents and my documents, they have the documents of America citizens.”

At this point the man notes that he was a federal agent, though not one that dealt with immigration. “I understand why, and the need for a lawful society, but I just don’t see a realistic plan of what to do with those 15 or 20 million people that are here,” he said. “I’ve never seen a Republican politician come up with a plan. There’s a lot of anger.”

King then asked him what his plan was, and after politely bantering back and forth a bit, the Congressman laid out what he saw as the problem, suggesting securing the border is actually quite easy if America simply had the willpower to do it.

“The first thing is to establish a will to secure the border, and establish the will to enforce domestic immigration law,” King said. “We don’t have that. You can hear this in the debate on this Soapbox all the way through the State Fair. You’ll hear this conflict. The reason is we have too many people with a conflicting interest.”

King then went on to question the motives of those opposing that stance. “Their first interest isn’t the rule of law, it isn’t America’s national sovereignty’s interest, it isn’t the future best interest of the United States,” he continued. “We have people who are trying to dictate immigration law that want to have political power and they want to have cheap labor. And then you also have some charity organizations that have turned it into an industry. And so they’re weighing in on this, and the public is having a hard time seeing through all of that smokescreen to get down to the facts of this. It’s not good for the world if America devolves into the Third World.”

The two men’s conversation concluded with King advocating to rebuild America so other countries can “recreate the things we have here,” saying America is simply offering a “lifeboat” right now to others. The man finished with telling King he respects that the Congressman speaks honestly of how he feels on immigration, but that he still disagrees with his stance.

King has an announced Democratic opponent for 2016, Kim Weaver.