Four of the five Democrats running for President spoke to an AFL-CIO convention at Prairie Meadows Casino in Altoona, giving Iowa labor leaders a policy-focused look at their potential candidates. Richard Trumka, the national president of the AFL-CIO sat on a panel of four to quiz the White House hopefuls on working class issues. Only Hillary Clinton wasn’t able to make the event, denying a chance for labor to get her to commit one way or the other on $15/hour. The event was last Thursday, but with the GOP debate on immediately afterwards this post got delayed. We’ve written plenty on Sanders and O’Malley recently, so I’m going to focus on Webb’s and Chafee’s performances, which ended up being the most interesting to me anyway.

This event was an important opportunity for Webb to address a crowd of kindred spirits. On the campaign trail he often highlights his working class upbringing and flashes his union membership card. Union members could be a key constituency for his campaign (well, as long they don’t endorse someone else), and might find Webb more relate-able to them on a personal level than some of the other candidates.

“Organized labor is not the enemy, organized labor is your friend,” Webb repeated several times in his turn at the podium, arguing Democrats need to do a better job of explaining the benefits of collective bargaining to voters.

When asked by the forum panelists, he said he’s in favor of raising the minimum wage, but wanted a variable one based on region. He warned America is trillions of dollars behind on infrastructure improvements. He advocated for a path to citizenship, but noted that “open borders are not valuable to the health of our country,” and that America has to be able to define its own population. On TPP, Webb said he was disappointed with the lack of transparency from the Obama administration on it, and suggested that putting the TPP debate into the presidential campaign is a great way to get more information out on it.

Webb got a lot of applause from the audience when he pushed back against political analysts who think Democrats shouldn’t align themselves so closely with labor. “I think Democrats need an anti-Scott Walker,” Webb said.

Most importantly, Webb connected his issue stances to his own personal life. He related with the crowd that “it’s a painful feeling when you pay that dues” of the labor union, but that it’s a great feeling when he gets his pension check. He spoke of how his wife is an immigrant and refugee when discussing the need for a path to citizenship. Webb recalled his mother’s poor, rural town in relation to his background and variable minimum wages. And he related how being a union member helped his daughter in simple, but important ways, like having someone who helps you schedule medical appointments. I haven’t heard many candidates advocate for the benefits of unions in this manner – it was very personal and effective. 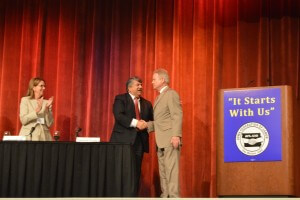 Webb’s closing was strong and crisp, identifying many of the economic inequality issues in America and proposing that 1) Wall Street investors should pay the same percentage on their income that working people do, 2) grow the economy fairly by bringing companies’ money back to America, expand manufacturing and expand collective bargaining to part-time workers, and 3) reinvigorate the labor movement.

In past Iowa events I’ve seen Webb at, he can sometimes wander around a bit in his speeches or not have as much prepared. This was a solid speech that struck right at labor’s top concerns and personally connected with them as well. Not every stance he took lined up exactly with what labor leaders wanted to hear, but he appeared authentic. The Jim Webb at the AFL-CIO convention sounded like a guy you could sit down next to at a labor hall and have a beer with.

I still do not understand why the Republican-turned-Democrat former Rhode Island Senator and Governor is running, and his appearance at the AFL-CIO convention sure didn’t clear anything up. Honestly, he probably should have stayed home for this one, as Chafee likely only lost potential votes with a weak, defensive and unfocused performance before the labor crowd. 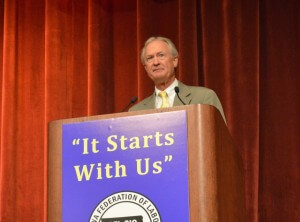 He was introduced as a Brown University graduate, a horseshoe blacksmith and a Watson Institute for International Studies fellow. Not exactly your typical union member pedigree. Chafee described the basis of his candidacy as “bringing home the resources we have overseas,” pledging to finally end the Iraq War. He did fine in his short opening remarks recounting his support of labor issues, highlighting his time as Warwick mayor working with AFSCME, police and firefighters unions, saying, “We had labor peace in our city.” He also described how he fought fellow Republicans to ensure Homeland Security employees had collective bargaining rights. But things fell apart during the Q&A.

He hedged on a $15/hour minimum wage, not endorsing it, but emphasizing he did think the minimum wage needs to go up. He talked a lot on why he voted against the prescription drug benefit measure for Medicare. And then he really fell apart on his TPP answer. Noting “I like to be consistent,” Chafee explained his past vote for CAFTA, argued “trade is going to happen” and reconfirmed he’d support the TPP trade agreement. That got a few boos from the crowd, to which Chafee defended himself by pointing out how a number of labor-friendly Midwestern Senators voted for NAFTA.

“After voting for NAFTA, each and every one of them gave their regrets and said it was the worst vote of their career,” Trumka gently pushed back.

“Okay, I stand corrected,” Chafee quickly replied to a few chuckles in the audience. “I think Tom Harkin voted for CAFTA. Should we check that?” The room responded with awkward silence. After a few more moments, the next panel member thankfully moved Chafee on to the next question.

Finally, Chafee’s closing remarks were just all over the place. He started out with a rather dull story about working through a teachers dispute in Warwick, and then proceeded to naming off all kinds of issues in random sentence after random sentence. He talked about how coal power makes America the Saudi Arabia of coal energy. He rambled through the multitude of things at stake in the 2016 election. Then he closed by saying, “I have been scandal-free” through all his elected offices.

Chafee’s whole performance was bizarre and a little sad. He lingered every time on why he opposed labor-backed issues, and then would offer a meek “but I’m a good labor friend” after each one. A more skilled politician would have downplayed their differences and pivoted to something they agree on. Or demonstrate strength/authenticity with a “Hey, I wasn’t with you guys on that one, but that’s how I felt about it, and I’m with you on all these other topics.”

And he breezed through the Q&A and his opening and closing statements so fast that he finished twenty minutes ahead of time. The panel members often waited at the end of Chafee’s answers to see if he’d say more, leaving even more awkward silence which Chafee filled with some soft-spoken ramblings. When Ken Sagar introduced Martin O’Malley next, O’Malley was still in the hallway doing an interview with Fox News. He had to rush in after a minute of confusion. 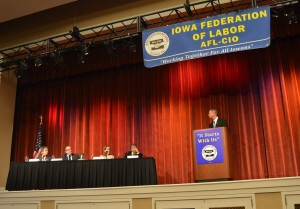 O’Malley turned in a typical impressive performance at the AFL-CIO event. His open and closing statements were forceful, well-written pieces that brought a number of applause lines from the crowd. He spoke of raising the minimum wage, collective bargaining (“You want wages to go up? You got to make it easier for people to join unions and collectively bargain”), strengthening retirement security and reigning in Wall Street excesses. I have started to notice, however, that O’Malley will sometimes abruptly transition to prepared talking points in the middle of an answer, going from conversational to scripted in a mere moment. And he oddly missed an easy applause line by just mentioning fair share in passing when it easily could have been an emphasis. Overall, though, a good event for O’Malley. 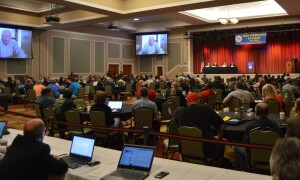 Many labor unions have been anxiously itching to endorse Sanders, and it was clear why on Thursday. The crowd gave him a loud standing ovation as he came on the video screen, having to speak remotely from Washington D.C. because the Senate stayed in session longer than expected. Yet even though he wasn’t in the room, Sanders managed to seem more up close and personal, relaxed and engaged from the screen. His rapport with Trumka and labor as a whole was obvious, often starting a response with, “Well, as you know Richard.” Sanders is the clear favorite of the labor movement right now – even if not with endorsements yet, then certainly with many individual members. The AFL-CIO convention was just another opportunity for Sanders to demonstrate how he’s been fighting side-by-side on their issues for decades.