Alzheimer’s is the most expensive disease in America. This year alone, it will cost $226 billion to care for the 5 million Americans currently living with Alzheimer’s. Those numbers are only expected to climb as the baby boomer generation ages because, unlike the other top ten killer diseases, Alzheimer’s (ranked 6th) is the only disease without a treatment or cure. The National Institute of Health and the Alzheimer’s Association have a goal of finding a treatment or cure for Alzheimer’s by 2025, as it has become a growing public health crisis. Our next president will have the power to reach this goal, but only if it is a top health care priority.

Iowa is the perfect state to start a grassroots movement with both our First in the Nation status in choosing the next president and with our citizens’ eagerness to affect change. Seizing this unique opportunity, the Alzheimer’s Association is running a special project to raise awareness about Alzheimer’s and related dementias amongst Iowans and those seeking the presidency. We are growing a movement across the state, recruiting advocates of all ages to share their stories and to ask each candidate what he or she will do to fight Alzheimer’s. Our goal is for each candidate to think about how they can impact Alzheimer’s, to engage with our advocates, and finally to make curing Alzheimer’s part of their health care platforms.

As I travel the state, meeting current advocates and training new advocates, I am struck by the power of their stories. Each advocate story, though devastating, always ends hopeful. Hopeful that this project will succeed. Hopeful that their personal tragedies will be of comfort to others facing the same tragedies. Hopeful for a world without Alzheimer’s. Dani Dunham of Nevada, Iowa is a passionate Alzheimer’s advocate whose grandmother is currently suffering from the disease. When I asked her why she prioritizes her advocacy she said, “I fight for those that can’t, and my family doesn’t want any more stolen memories. I fight for a cure so my children do not have to worry about this devastating disease”. 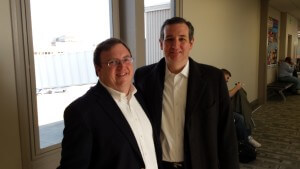 Our efforts have not gone unnoticed by the presidential candidates. In early March one of our young advocates, fifteen-year-old Sophia Aguirre asked Gov. Jeb Bush what his administration would do for Alzheimer’s. He responded by asking how many in the room knew someone with Alzheimer’s, and almost every hand went up. He then spoke of increasing the NIH budget and conducting more research. When John Funderburk, director of advocacy ran into Sen. Ted Cruz at the Des Moines Airport recently and introduced himself, Cruz responded by saying, “I need to learn more about Alzheimer’s”. Last month, I conducted an advocate training in Sioux City. Following the training, two new advocates spoke with former Sen. Jim Webb who spoke of funding early detection. The following day Gov. Huckabee spoke with Alzheimer’s Association staff and volunteers about preventing the disease.

These early successes have been fuel to increase our efforts, but we need more advocates to do so. Please considering joining us! We will be facilitating advocate training events across the state that will prepare volunteers to intercept candidates, share their stories, and give them other ways to get involved. To find an event near you, please go to: act.alz.org/iatrainings.