Tomorrow, Republican presidential candidates galore descend upon Boone to attend Senator Joni Ernst’s inaugural Roast and Ride fundraiser. There’s a fun, carnival-style level of excitement building around the motorcycle- and pork-focused event for Republicans, much in the same way Democrats once got pumped up for the Harkin Steakfry. And that raises a question: What are Democrats to do now that we no longer have Senator Tom Harkin’s Steakfry anymore? 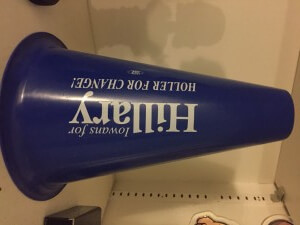 Every Democrat loved the Steakfry. Sadly, I can’t find my old photos of the 2003 and 2007 Steakfry’s right now (they’re in a box somewhere), but those two days remain some of my favorite memories of all my time in Iowa and politics. The 2003 one was a muddy mess, with sign-waving supporters for Kerry, Dean, Edwards and Gephardt sporting plastic ponchos. The 2007 Steakfry featured the Obama campaign’s big show of organizational strength when then-Senator Obama led a boisterous march of thousands of Iowa Democrats into the field. I also got one of my favorite pieces of ridiculous campaign chum there, the “Holler for Hillary” horn, which still sits above the desk I’m typing this at.

So will Democrats create a replacement annual event? Bruce Braley’s “Bruce, Blues and BBQ” sadly died with his 2014 defeat. The Iowa Democratic Party each year already hosts their Hall of Fame Dinner (announced for July 17th this year – Starting Line hears unconfirmed rumors Hillary Clinton may be a speaker) and the Jefferson-Jackson Dinner (where several presidential candidates have made game-changing speeches that altered the caucus race before) in the late fall. Those two are always great, but lack that special something the big, outside Steakfry presented.

Part of the problem is Iowa Democrats lack an obvious statewide standard-bearer after bad Republican wave years in 2010 and 2014. Congressman Dave Loebsack is currently our ranking leader, and could take the initiative to build a statewide event. Majority Leader Mike Gronstal keeps Democratic priorities alive in the state with his slim Senate majority – though his home base of Council Bluffs may be too far for many to drive out to.

Starting Line reached out to a number of Democratic activists and leaders to gather some anonymous ideas, and I added in a few of my own. Below is a list of serious and funny ideas (way more funny ones) of what could replace the Steakfry. Make sure to add your own ideas to our post on Facebook.

The Democrats’ lone member of Congress in Iowa has a district with plenty of centrally-located counties. He’ll likely be representing that district as long as he wants, so why not truly take the reigns as Democrats’ leading elected official?

The premier event of Northern Iowa Democrats held at the Surf Ballroom in Clear Lake is already well-established. It pulls in a large number of county party activists from all over Northern and Central Iowa. Why not turn it into a bigger statewide event? It may be up north, but at least it’s relatively central Northern Iowa. Would they need to attach someone’s name to it though?

Tom and Christie could host a Sweetcorn fest somewhere in Central Iowa – Southeast Iowa is well-known for a similar event. West Point’s Sweetcorn Festival, just outside the Vilsack’s home county of Henry, is a major event each year. Maybe sweetcorn isn’t the right food – but the Vilsacks remain one of Iowa Democrats’ most beloved families, so they’d be a perfect host.

The progressive, labor-backed organization already does a well-attended holiday event in December. Maybe Progress Iowa could do a fun one outside in the summer or fall? Perhaps even around the State Fair when people are coming to Central Iowa anyway (and presidential candidates are swarming the Fair)?

Attendance drops severely the following year after Gronstal tells the same bad joke five times over the course of an hour. Sponsored by a generous donation from Reese Witherspoon.

Liz Mathis’ and Tyler Olson’s invitations mistakenly get lost in the mail.

The event is held outside on the hottest day in August. Attendees’ fast-melting ice cream teach them a valuable lesson about the earth’s melting polar ice caps. The children uncontrollably crying at their melting ice cream are simply a preview of things to come for the youngest generation, Hogg will explain.

Not an actual marathon, but a dinner where everyone comes up to State Rep Abby Finkenauer and gives her unsolicited advice on what office she should run for next. Also know to Abby right now as “every damn day of the week.”

Secretary Vilsack takes his experience at the Department of Agriculture and presents Iowa Democrats with 167 different takes on corn-inspired recipes. The Onion sends 20 reporters to cover the event.

State Senator Chaz Allen, who enjoys driving race cars as a side hobby, hosts an annual race at the Newton Speedway. Candidates battle for position on an actual racetrack.

Since we’re talking about racing, major Des Moines donor and power-player Jerry Crawford could give new meaning to the term “political horse race” by having presidential candidates enter actual horses into an actual horse race at Prairie Meadows. Hillary Clinton’s horse gets a 20 second head start.

Another potential for a great pool party. EMILY’s List not invited.

The Congressman Professor enthralls the crowd with a dissertation on income inequality statistics and graphs… actually the Iowa City crowd would probably love that.

Just like Joni Ernst’s, except the riding is done on bicycles instead of Harley’s, and Bolkcom is roasting up tofu instead of pork.

State Senator Mary Jo Wilhelm, quite nimble on the dance floor, could host a dance party in Northern Iowa.

The State Senator from Maquoketa will endorse whoever takes the longest to get to the mat in a one-on-one wrestling contest. Even money on both O’Malley and Webb.

And another random idea sent in by a smart reader: Should the IDP rename the Jefferson-Jackson Dinner the Tom Harkin Dinner?

Photo by Greg Hauenstein. See more of his work at greghauenstein.com