We hear all kinds of interesting things here at Starting Line, and figured it was about time for another fun Rumor Roundup. Here’s the latest political chatter making its way around Iowa:

All the cool kids these days are getting their own Super PACs. Starting Line hears that the initial stages of setting up a Super PAC for Ravi Patel, Democratic candidate in the 1st District, is underway. Jeff Link, Bruce Braley’s top strategist from the Senate campaign, is rumored to head up the effort. A number of firms in D.C. are reportedly competing to provide the compliance work for the organization.

“The campaign has no knowledge of any Super PACs being formed on its behalf,” said Norm Sterzenbach, a Patel campaign adviser, in an email with Starting Line (they legally can’t coordinate, so that’s good). “But Ravi has proven he has a strong fundraising network. In his first quarter he was one of the top Congressional fundraisers in the country and he is continuing to see success. He is fully committed to raising the funds necessary to be competitive in this race. There is already one Super PAC operating in this race. EMILY’s List came out early with their support of Monica Vernon and we fully expect them to run a considerable independent campaign on her behalf.”

While EMILY’s List will play heavily in the 1st District race (Vernon was their first endorsed Congressional candidate of 2016), it’s notable that their Super PAC supports a number of candidates nationwide. This one would be solely in support of Patel’s candidacy, which is uncommon in Congressional races, and certainly in competitive primaries. Patel easily raised the maximum amount from an impressive number of donors for his first fundraising report, so there’s likely no shortage of people eager to contribute to the Super PAC.

Now all they need is a name – the presidential PACs this cycle have ranged from the clever (O’Malley’s O’Say Can You See PAC), to the idiotic (Jeb Bush’s Right to Rise PAC). If you have a clever suggestion, shoot us an email or comment on our Facebook post.

That didn’t last long. The presidential hopes of former Virginia Senator Jim Webb are off to an inauspicious start in Iowa as his state director, Rania Batrice, has already resigned from the campaign. Starting Line was the first to report of her hire back in early March. It was an odd pick to start off with – Batrice had some previous Iowa campaign experience, but wasn’t very well-known among the Democratic insider crowd here.

Starting Line heard of Batrice’s resignation earlier this week, but Jennifer Jacobs was a little quicker on the draw and typed up a story yesterday afternoon. We hear Webb wants to focus his Iowa efforts largely on veterans outreach. As we discussed before, that was a useful strategy for John Kerry in the 2004 caucus when there wasn’t a Republican primary, but it has real limitations this time around. It sounds like he already has a replacement, someone who’s worked for him before. Hopefully they can right the ship of what is quickly becoming a rather quixotic campaign.

Starting Line hears from solid sources that Dallas County Democrat and businessman Desmund Adams is set on a bid for Congress. He’s stated to a number of people that he’s running, and has apparently been building up staff from both locally and nationally, along with reaching out to connections in D.C. After a lot of quiet months in the 3rd District race, Democrats will soon have their first declared candidate. Look for an announcement in mid or late June.

Time to order up the campaign t-shirts. Starting Line hears chatter out of Sioux City that Republican State Senator Rick Bertrand wants to run for Governor in 2018. He’s a pretty ambitious guy, so we wouldn’t be surprised if the rumors are true, though he’d face stiff competition in a GOP primary with Bill Northey, Kim Reynolds and a host of other young state senators.

It’s farewell to the Boone County lifestyle as Jim Mowrer and family packs up their moving boxes and relocates to the 3rd Dist… uh, I mean, Des Moines. He’s moving to Des Moines. Certainly no one will read anything into that, right? Mowrer has apparently owned a home in Des Moines for seven years.

It sounds like the DSCC is making calls into Iowa, looking for a recruit brave enough to challenge Chuck Grassley in 2016. We hear both Rob Hogg and Tyler Olson are on the call list. Hogg is likely to run, but this is the first time we’ve heard Olson’s name come up for this gig – though he’s one of those people who gets asked to run for literally everything.

Martin O’Malley has some new digs in Des Moines as his campaign has set up shop in an office park just south of downtown. After formally announcing in Baltimore on Saturday, O’Malley will hold a meet-and-greet there at 5:30, 405 SW 8th St. Perhaps their neighbors will deliver a fruit basket to welcome them – the Run Warren Run office is literally three doors down. No word on whether O’Malley staff plan to kidnap Warren volunteers as they exit that office, drag them down to theirs, and yell, “But O’Malley opposes TPP too, and he’s actually running for President!” 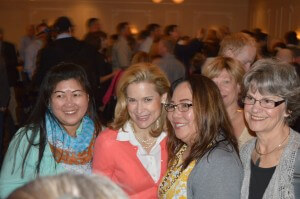 One Iowa Democrat has a rather unique connection to a Republican presidential candidate: Des Moines’ Nathan Blake was once babysat by family friend Heidi Cruz, the wife of Senator Ted Cruz, back when his family lived in California. Starting Line heard of this rumor a while ago, and confirmed it with Heidi at a recent event (she’s exceptionally nice in person). Of course, Blake opposes just about everything that Ted Cruz says, so don’t expect him to be introducing Cruz at any Iowa events.

As always, if you know of a good rumor out there, drop us a line at IowaStartingLine@gmail.com