Talk to press, you’re fired. That was the warning beat into my head during my early field organizing days, reminded by the campaign hierarchy that only official spokespeople ever make any public remarks. Of course, the danger wasn’t so much in speaking to press (everyone knew that was a no-no), but more so that you shouldn’t make any comments online or in a public place where your remarks could end up “on the front page of the New York Times.” It’s a different era now with Twitter, Instagram and every other app that people use to communicate, often with settings set to “public.”

Still, it piqued my interest when I noticed every field staffer for Hillary Clinton wasn’t just tweeting on the job, but that doing so has essentially become part of the job. The effort is led by several experienced digital staff in Des Moines, a department of the campaign that didn’t exist when I worked for Clinton in Council Bluffs during 2007 and 2008. This relatively new “digital organizing” strategy practiced by the Clinton campaign is fascinating to watch and should be followed closely by every political operative. Because if Clinton wins the nomination – and most think she will – her national operation could employ these tactics across the country, leading Democratic campaigns up and down the ballot to adopt the strategy for cycles to come.

The advantage of this approach is obvious: many people don’t have land lines anymore, cell phone numbers are difficult to get ahold of, and young people communicate through apps and text more often than they do in phone conversations. “Organizers are always looking to have conversations with Iowans where they are – whether that’s in a coffee shop, in a home, or online,” says Lily Adams, a Clinton campaign Iowa spokesperson. “We’ll continue to knock doors, make phone calls, and meet Iowans in person but engaging online adds new, important venues for conversations about Hillary Clinton’s campaign to create an economy that allows everyday Iowans to get ahead and stay ahead.”

A Clinton organizer reaches out to a potential volunteer on Twitter, even to people with questionable football tastes:

.@vikingslover26 Thanks for your support! I'm the organizer for #MasonCity for @HillaryforIA – let's get coffee to talk about the campaign!

For all the love and acclaim the VAN/Votebuilder rightly gets as Democrats’ main voter database, the Iowa lists at least are getting increasingly obsolete for certain younger voters. Phone numbers and addresses just don’t cut it anymore for drop-off voters living in apartment buildings. In addition to Twitter, Clinton organizers are setting up Facebook groups for their individual turf to keep in touch with activists and volunteers.

“Voters don’t think of ‘channels’ when they get information about a candidate in the Iowa caucuses – it’s just ‘information,'” says Mark Langgin, a partner at Des Moines-based political consulting firm GPS Impact. “With that being the case, organizers lose a real opportunity to communicate a message if they aren’t on Twitter, Facebook or Snapchat talking about their support for their chosen candidate.  You can only knock on a door from 3 – 8 pm and hope to talk to a voter.  People are on their mobile phones all day.”

It’s one thing for a communications director to email out a press release to reporters, who may or may not write about it in news sources people may or may not read. It’s another if you have a small army of paid staff with their own local followers they’ve cultivated pushing out your message at once. Not everyone follows Hillary Clinton’s official Twitter or Facebook page. But a local organizer who’s had a personal conversation with a voter, friended and followed them, can still get that message in front of them.

When Hillary Clinton recently placed an op-ed in the Des Moines Register, her entire field team tweeted out links to it:

Great to see @HillaryClinton mention Bryce Smith, who I'm proud to call a friend, in her @DMRegister Op-Ed! http://t.co/2gIoQOAhJA

To show how hard their operation is working, campaigns will often send out to reporters impressive-looking stats of numbers of doors knocked or volunteer hours. All I have to do now is glance through my Twitter feed to see what the Clinton folks are up to each day. The continual stream of pictures from field organizers meeting with activists, setting up offices and collecting supporter cards projects a constant show of strength for anyone who’s watching. The Run Warren Run team had employed this method well in Iowa as well before the Clinton folks got on the scene.

A group of Clinton supporters at the University of Iowa:

Pictures like these must be worrisome to candidates yet to get in the race, reminders of how much they need to catch up:

Think the campaign is only about large cities? Think again: Ellsworth, Clarion, Duncombe voters are in4 @HillaryforIA pic.twitter.com/JKTQX54znh

Perhaps most of all, from an internal campaign perspective, the digital organizing strategy is a big deal in making your field team feel part of the larger effort. When I worked for the Clinton campaign it was the first (and actually, only) time I felt like I was part of a real team. It’s easier on national campaigns, but they’re going further this time by entrusting organizers with a small portion of public messaging typically silo-ed off in a headquarters office. And it’s helpful when you’re a staffer working by yourself in a far-flung field office to be able to sit down at the end of the day and scroll through what all your co-workers have been up to.

It also benefits the individual staffers in the long-term. Having a large number of Twitter followers is a real asset in politics. All of these staff will land other jobs at some point with a social media footprint boosted by their time working for Clinton.

It has to be pretty good for morale when an organizer gets re-Tweeted by “boss lady:” 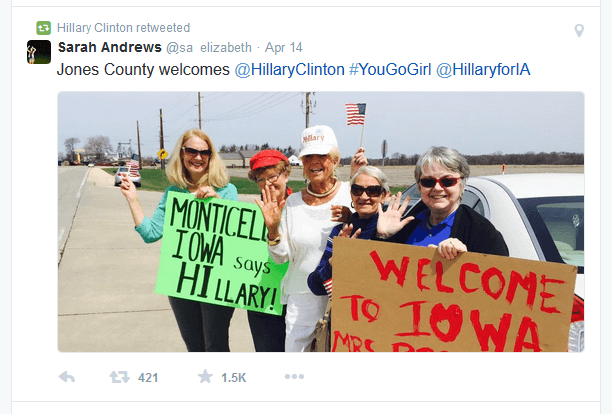 The Dangers of Being Too Public

Most younger people will read this and simply shrug their shoulders, wondering why on earth campaign staff communicating via Twitter is even noteworthy. It is because political campaigns, especially presidential ones (and especially Hillary Clinton’s), are often very, very careful in controlling their message. Campaigns have obviously used social media for many years now, but it’s mostly been centrally driven and through advertising. Now they’re integrating it throughout a larger part of the operation. With that comes risks.

“With anything you post on the web or social media there is always the chance that over 3 billion people could possibly see a post in bad taste or that is off message,” cautions Langgin. “The message discipline that we are used to seeing in traditional media needs to extend to organizers’ tweets and Facebook news feeds.”

While it’s not clear if there’s a set of social media rules for staff, it seems like in general the Clinton folks are saying the same kind of things they would at a county party meeting or on the doors. And their tweets are all positive. Like, overwhelmingly positive. Actually, downright obnoxiously positive (never trust a campaigner who isn’t at least a little cynical).

But these field staffers are mostly in their early and mid-20s. It’s not hard to think how a late night at the bar after a long day’s work could result in a joke tweeted out that doesn’t sound as good in the morning. The folks in Iowa now may be well-disciplined campaign veterans, but this organizing tactic may expand nationwide and to plenty of down-ballot races. How many staffers working in less-structured operations will find themselves embarrassingly quoted in the local paper from an errant tweet? How will large field operations in swing states and coordinated campaigns approach this strategy when they have hundreds of field staff, many of which are desperation last-minute hires? Will there be a tiered system of who can be public and who isn’t?

There’s also the danger of giving away too much of your strategy. After the Clinton campaign’s first week I was able to figure out exactly how many field staff they had, who worked for whom, and which counties each organizer was assigned, simply by skimming their Twitter activity. In 2007 Clinton’s Iowa team intentionally “leaked” a hiring flier calling for resumes to fill 100 Iowa positions, when in reality the campaign was actually adding something like 300 caucus slots. You can’t play those kind of games as easily when everyone’s online. Knowing they’re in the driver seat for the primary, the Clinton campaign may not care. If they had stiffer competition, they might keep their numbers a little closer to the vest.

The Future of Democratic Campaigns?

Overall, this strategy is a smart one and should be exciting for political operatives hoping to work on successful campaigns that keep up with the times. It may seem obvious to expand traditional voter outreach into more public and online ways, but adopting these methods are by no means a given. The fear of one potential bad story in the press due to a mistake has killed much bigger ideas before on countless campaigns.

“I see digital politics as an extension or amplifier of traditional politics and a way to reach voters who aren’t consuming media in more traditional ways,” Langgin says. “Over 30% of likely voters are classified as light TV viewers and are increasingly consuming content across multiple screens.  I don’t believe you win with digital alone, but it’s a critical part of any successful campaign.”

It’s extremely encouraging that the Clinton campaign is leading the way on this new approach. They’re the most watched and scrutinized operation in perhaps ever, and yet are testing out something different in the public eye. Too many other campaigns prefer to stay in their bunkers, never trying anything new and take the safest path to Election Day based on whatever their polls tell them. Yes, there’s dangers to these methods. But there’s a much larger peril to not keeping up with the times and failing to embrace new ways of digital campaigning. Hopefully others will take careful notes on what success the Clinton campaign sees with its digital organizing, and find ways to implement it in plenty of other campaigns around the country.