Hillary Clinton hoped to “start small” with her inaugural Iowa trip for her 2016 campaign, but that didn’t stop excited crowds from swarming her during two “off-the-record” drop-bys in Mt. Vernon and the Iowa Statehouse. Clinton briefly stopped at a coffee shop in the small college town of Mt. Vernon on Tuesday to chat with a few local activists. But word of the unannounced stop traveled quickly on social media, and Clinton was soon swamped by fans and onlookers who ran down the main street to catch a glimpse. When she arrived to the Capitol for a closed-door meeting with Democratic legislators, she received an overwhelming reception from a crowd of cheering pages and clerks, many of which were college and high school-aged.

So goes the tricky balancing act Clinton must walk as she re-introduces herself to Iowa and the nation in her second run for President. A political celebrity in her own right, Clinton and her team look to find the right approach with Iowa voters who delivered her a key setback in her last race. Criticized (wrongly in some instances) for a 2008 campaign that didn’t connect well with regular caucus-goers, Clinton focused her trip on small, issue-focused roundtables and low-key coffee shop meetings with selected activists. Her two public events were an education roundtable discussion at Kirkwood Community College in Monticello and a small business conversation at Capitol City Fruit in Norwalk.

Whoever on Clinton’s Iowa team picked Kirkwood and Capitol City Fruit should get the campaign’s first Employee of the Month award. From a messaging standpoint, you couldn’t do much better with either. They both featured students or business owners who work hard to get a better life, but could use just a little bit of help to make their dreams a reality. From a logistics standpoint, both sites were tucked away in areas isolated from the main town and easy to get to, avoiding the appearance that the campaign and its massive press following was taking over a small Iowa town.

At the Monticello event secret service was notably not noticeable. That’s a change compared to the heavy security presences often seen during her 2008 bid. They were there of course (I overheard the mechanic at Kirkwood joke, “I want my weapons back,” referring to how the Secret Service had confiscated all the wrenches in the shop during the visit), they just weren’t an obtrusive factor.

The best part for Clinton from these type of events are the unscripted moments that could bring out a softer side. It almost happened at Kirkwood when a student mentioned her sister had learning disabilities and struggled to keep up in school. Clinton responded well on policy, saying schools need better assistance to ensure every student can learn in their own way and have one-on-one support, but didn’t delve more deeply into the young woman’s specific situation. In Norwalk she engaged a bowling alley operator who described how his partner has epilepsy. Clinton followed up and got him to reveal that his partner’s medications would cost $2,000 to $3,000 per month without health insurance, which they currently have thanks to President Obama’s Affordable Care Act.

It didn’t satisfy everyone. There were some press complaints about limited access, though all Iowa media and the key national reporters got in. Clinton didn’t answer anything more than one or two minor questions from the press at her events. Timeliness remains a bit of an issue, as Starting Line heard of some grumbling among Democratic legislators that Clinton was 45 minutes late to a meeting with nearly 70 Democratic elected officials. Clinton largely stuck to the same themes laid out in her introductory video, not revealing too much more about potential policies she’ll promote. And yes, all the events were very stage-managed, something many reporters pointed out publicly in their write-ups or privately during the events.

But before people imply too much on Clinton’s strategy, they should remember this: It is what it is. It simply is not possible for her to run a low-key campaign where she conducts impromptu retail politicking in small town city squares when she has at least 200 reporters following her every move. Her decades of high-profile experience is both her greatest strength and presents her biggest challenge. At least she’s trying. So far, most Iowans seem to appreciate that.

Plus, the roundtables in particular may be a little dry, but it’s still more interesting than listening to the same stump speech five times a day. The participants’ questions weren’t pre-screened, so you never know exactly what these people will ask. That’s different from a press conference where you’d get hit with tougher questions, but you typically know exactly what’s coming. The roundtable questions were mostly softball stuff, but it was all what regular voters actually care about, important for Clinton as she forms her broader campaign message aimed at Democratic caucus and primary-goers. Missing, however, were more pointed questions on issues like the Trans Pacific Partnership or the Bakken Pipeline. Those are topics Clinton must address in the coming months before many Democrats are ready to sign on.

Overall, her trip accomplished what it set out to do. It largely put to rest (for a while, at least) the narrative that she would run a detached Iowa Caucus campaign or that she desires a coronation and wouldn’t work for the nomination. Of course, she can’t sway the likely 100,000+ caucus-goers she needs to with six-person roundtables at a time, and her aides suggest she will transition over to some larger rallies in May. But so far the smaller event focus seems to be keeping Iowa activists happy, even the many who didn’t get to see her on her first trip.

All of which is a very good thing, because really, who the hell cares in the long run whether Hillary Clinton speaks with ten people or a thousand at her events? The press has written non-stop on that topic (I’m guilty as well, of course, with this post), and Clinton’s campaign was wise to address it early on. It speaks some to her personality and overcoming the perceived arrogance factor, but the real race for Democrats’ votes begins when she lays out her policy agenda for a Clinton presidency. Will her positions be enough to satisfy skeptical progressives?

Clinton gave plenty of hints during her Iowa swing as to what those policies may look like. She criticized the wage gap, hitting CEOs who make 300 times as much as many of their employees. Her meeting in Marshalltown with several of Iowa’s leading ethanol advocates could indicate where she’ll come down on renewable energy policies. Most notable of all was her suggestion that a constitutional amendment might be necessary to finally get big money out of politics. That would be a huge undertaking if she sticks with it.

For readers to get a better sense of what Clinton is campaigning on this time, I recorded several videos of her events in Monticello and Norwalk (I couldn’t bring in a tripod, so forgive the occasional shakiness). See the clips below for a better look at Clinton’s Iowa trip:

Clinton listens and responds to small business owners in Norwalk:

Perhaps most importantly, Clinton talks about Paid Family Medical Leave, which I predicted several weeks ago will be the policy centerpiece of her campaign: 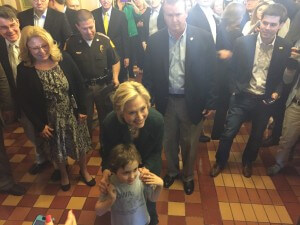 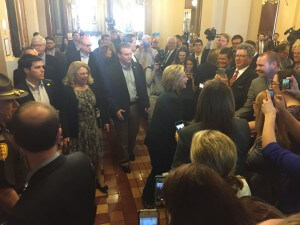 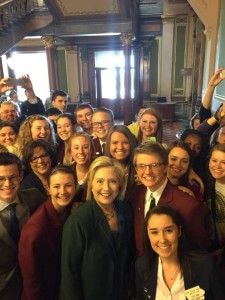