Ankeny has proven to be an Iowa boom-town in recent years, with new neighborhoods filled with young families popping up across the Des Moines suburb seemingly every month. A woman whose family looks like the many moving to the popular and thriving community now seeks to represent them in the Statehouse. Heather Matson plans on announcing her candidacy for House District 38 today, aiming to challenge Republican incumbent Kevin Koester.

“I’m running because I think it’s time for a new generation of leadership,” Matson says of her decision, adding that she feels like “big new ideas” are missing from the current conversation in state government. She worries that voters aren’t getting an option and says, “I see too much of legislators going to their corners and not being able to sit down and have an honest conversation and move past the stalemates.”

This will be Matson’s first time seeking elected office, and many first-timers will often point to leadership experiences and policy knowledge to sell voters on their preparation to hit the ground running if elected. She certainly has plenty of both, with years of involvement in campaigns, leadership roles in issue-groups and experience tracking legislation during each legislative session. But what may prepare Matson the most for serving in the Legislature is her battle-tested diplomacy with two five-year-old twins.

“When you spend a lot of time with your kids, five-year-olds in particular, you spend a lot of time negotiating,” Matson says of her kids, Emma and Henry. “I would never have realized this before having kids, but your negotiating skills really, really get honed when working with pre-schoolers.” She believes that could translate into being a more effective representative in the Legislature. “It’s always about striking a balance. When I think about me in general, yes I’m a Democrat, and I’m very proud to be a Democrat, but I also think first and foremost in being a problem-solver and a collaborator.”

Matson also feels she can connect on the biggest concern of other families in the House district: “Wanting to see things be better for your kids, and being worried about whether or not they actually will be.” She doesn’t see enough progress being made in Legislature to address that, saying, “I feel like it’s more of the same – and with all of the challenges and opportunities we face as a state, maybe we need to rock the boat a little bit.”

Finding A Love of Service and Iowa

While Matson has lived in Iowa since 2003, she grew up in Rhode Island, and recalls politics as a frequent topic in family conversations. “My parents were very politically independent and they would often talk about how their votes probably cancelled each other out,” Matson says, though she notes her family wasn’t actively attending rallies or campaign events.

However, her interest in the field deepened when she took a trip in high school to Washington D.C. as part of “Close Up,” a program that takes students to see the inner workings of government. In the summer of 1993 she attended a Senate committee hearing on gays in the military, where General Norman Schwarzkopf was testifying. “When you’re in high school you have a level of bravery that doesn’t exist when you’re older and don’t have that same sense of what’s technically allowed, so I decided, ‘I’m going to go introduce myself to him,'” Matson remembers. She walked up to his table, introduced herself, thanked him for his service as Matson’s brother had served in the first Gulf War, and got his autograph. She came away loving the experience and seeing government in action, now wanting to find other ways to get involved.

Matson later went to college in Massachusetts, and moved to DC afterwards. After looking for jobs on the Hill, she ended up working for the Chicago Mercantile Exchange for five years. There she worked on issues like futures trading, something she found very interesting despite having previously known little about it. “It was a great eye-opener for how our economy plays into the global economy and that business has a very important role to play in this country,” Matson recalls. “We need to be finding ways to foster growth, while also have smart regulations to keep consumers safe, but not totally stifling business at the same time.” While in DC she attended George Washington University, earning a masters degree in Legislative Affairs.

Matson moved to Des Moines in 2003 with her husband, Chris, for him to attend medical school at DMU. Both were from the East Coast, but they came to fall in love with the state and the Des Moines metro in particular. They felt much more involved and connected here, and also appreciated the lower cost of living. Chris ended up doing his residency in town, and now is a family practice physician at Broadlawns.

Challenges and Opportunities for Ankeny

“We moved here in part because of the thriving community,” Matson explains of her family’s move to Ankeny, saying she’s especially happy with the quality of the schools. Ankeny itself is doing really well, she believes, in part thanks to a well-managed and proactive local government. She looks forward to discussions with local leaders to find out “the help that they could use from the state government or to make sure that the state government isn’t getting in their way.” Matson also wants to pursue ways to bring unique and different jobs to Ankeny. “It’s important to focus on economic development in the state on things that go beyond retail,” she says. “While I love having a lot of really wonderful places to shop, I don’t think that’s what’s going to solve our greater economic problems.”

She also notes that the rapidly-expanding school district will soon need a few more schools to handle new enrollments, and that managing the challenges of that growth will be key. She’s been disappointed in the stalled education funding debate during this legislative session, saying, “The school board still hasn’t been able to set a start date, which I’m sure is incredibly frustrating since I know they usually set it in January.” If elected, Matson also hopes to share the successes the Ankeny schools have experienced, and see if it can be replicated around the state.

Besides maintaining quality education and developing a “21st Century economy,” Matson sees other issues important to Iowa’s middle class. “We face challenges like clean water, our crumbling infrastructure,” she says. “We still have plenty of problems with access to quality and affordable health care.” All those issues are connected with each other, she points out, and wants the Legislature to find ways to move all of them forward. Still, she says her full slate of issues aren’t completely formed yet. “Part of why I’m getting started so early is so that I do have that opportunity to have as many conversations as possible with voters and find out what people in this community really care about.”

A Competitive Race Ahead

The contest between Matson and Koester will likely be one of the premier match-ups of the 2016 cycle in determining which party controls the Statehouse. Matson has worked on a multitude of Iowa campaigns over the years and knows better than most first-time candidates what it takes to win. She recently served as the Vice Chair of the Iowa Democratic Party, so she has networks throughout the state she can call on for donations and volunteer support. The changing demographics of the district favor a type of candidacy that Matson is putting forward, and turnout among Democratic-leaning younger voters and families that are moving into Ankeny should be boosted by the presidential year contest.

“It really is about connecting with independent voters, and I believe that voters really want a forward-thinking vision and they want big ideas,” Matson thinks is her main path to success here.

The district itself stands at a nearly even 1/3 split in registration, providing a strong opportunity for House Democrats to pick up a seat. 6,324 Democrats, 6,776 Republicans, and 6,562 No Party voters are actively registered there as of March 2015. House District 38 covers the south half of Ankeny, but also includes Saylorville, a few rural Polk County townships and pieces of the north side of Des Moines. 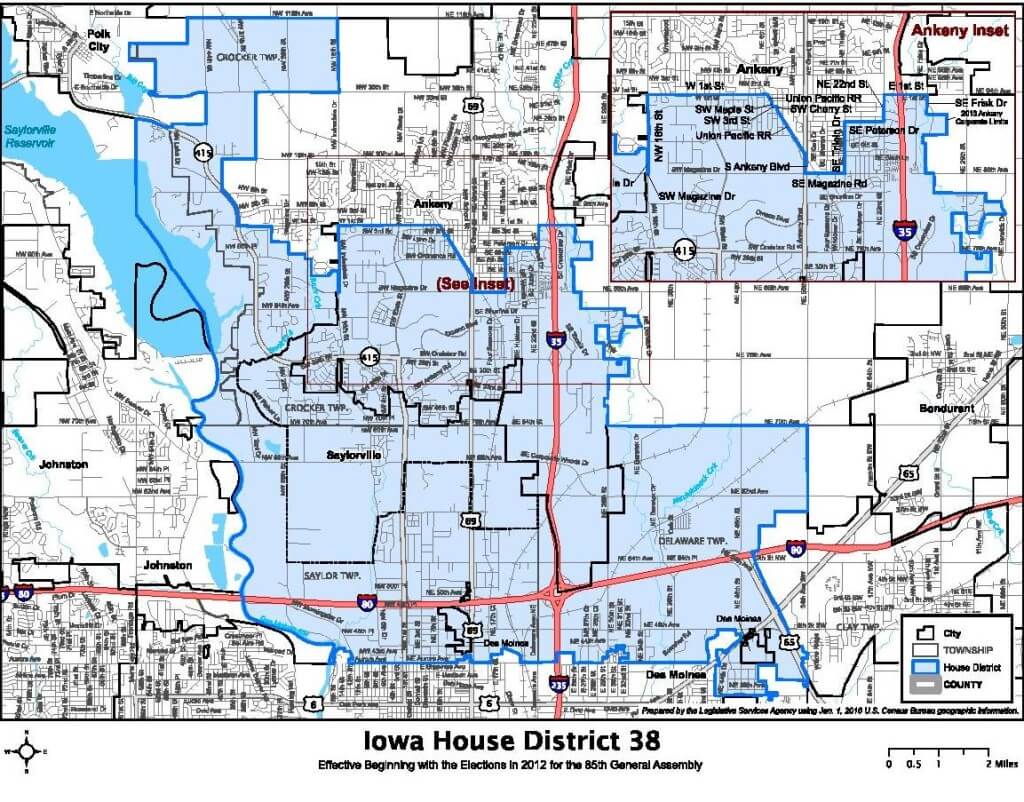